Savings and lending groups not only help people save money, they can save lives. A modest loan helped James Malueth survive a surprise attack that reduced his home to rubble on December 16, 2013. James, like many of his fellow Jonglei State residents in South Sudan, was caught in the crossfire of a conflict. But fortunately, earlier that day James had attended his weekly Savings and Internal Lending Community group meeting, where he took out a loan. That loan helped save his life. He used it to escape his hometown of Bor, cross the Nile River and take refuge in the relative peace of neighboring Lake State. 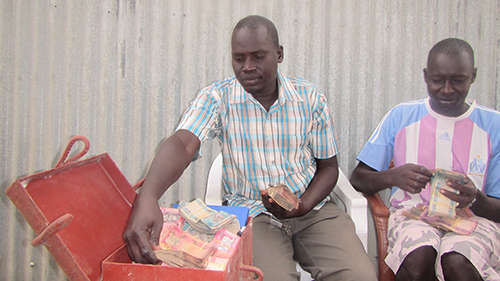 James first joined SILC, a Catholic Relief Services' savings-based approach to microfinance, through the USAID-funded Jonglei Food Security Program. SILC encourages group members to save incrementally and pool their resources. Members can get loans from the SILC for small business ventures, home repairs and household expenses. When the conflict reached Bor, James and the other members of the Maet-de-Ngath SILC group borrowed from the $8,484 the group had accumulated in its savings box and used the loans to evacuate their families. The loans paid for a Nile River boat crossing, and helped members flee the ongoing war and chaos of their native Bor. From the safety of neighboring Lake State, members went on to Juba, Kenya and Uganda.

"We tried our best to put savings away since the group was started," James says. "By the time the crisis came, we had more than $7,575 in that box. We were lucky that we had put our savings into the SILC box and not into the bank. Some of us who were keeping money in the bank in Bor could not get it once the crisis hit us. I had my bank account in Bor, but I never accessed it during the crisis, and the bank itself was burned down. We survived on our SILC savings for months till the situation in the country returned to normal."

It took 5 months before people who had fled the conflict in Bor started returning home. The Maet-de-Ngath SILC group called its first meeting since members were dispersed in December 2013. Members repaid their loans plus monthly interest of 15%, an amount set by group members. More than $9,090 was collected.

The crisis made SILC members appreciate the importance of having a cash reserve to deal with unexpected emergencies.

Upon their return, the savings helped them restart their lives. Many had lost everything in the violence.

"We have now understood that the crisis is unpredictable and could occur again," James says, "Because of this, we are collecting back the money we loaned out to our members with interest."

The Maet-de-Ngath SILC group has big plans for the next year. Chief among them is registering a shared business that sells fuel and food items. The group's goal is to save at least $30,000 by mid-2015. Much of that money will be used to provide loans to group members for business startups.

Like many group members, James was initially skeptical of the effectiveness of SILC. It was a completely foreign concept. "When we began the training on SILC, I was confused," James says. "I worried that if I sold one of my goats to start saving, that the money would be wasted instead of being invested into something productive which would generate profits."

Initially, James was also concerned about leaving his hard-earned savings in a locked box. "If the money is in the box, then how do we ensure it is not misused?" James asks. He was, however, reassured by the safeguards put into place: The savings box has three padlocks, and the keys for the padlocks are kept by three different members while the box is kept with a fourth member. "All [of my] questions were answered by the JFSP [Jonglei Food Security Program] staff, and now I am convinced beyond doubt that this system is the best," James says.

"If there is any better way of keeping money, we should be taught so that we generate more money from our small funds," he says. "For those of us like me who never thought of emergency after South Sudan became a separate country from Sudan, we were surprised by the December crisis. If we had saved more funds with us at home, we could have saved even more lives," he says.

SILC group secretary John Ajak adds that receiving a loan "doesn't require signing of any documents or any collateral if you are a group member. It's the group members who decide whether you can take a loan. So the process is made easy. You just call the group and let them know that you have something to do that requires money for a specified loan period, and then the loan can be given to you.

"It's like your own money, because the interest that is paid on loans by borrowers is later shared among all the members," Ajak says. For people like us, getting a loan from the banks in South Sudan is very difficult. Even on your savings you don't earn interest either, so SILC is far better than banking," he says.

The Maet-de-Ngath SILC not only saved group members' lives, the repayments and interest are now rebuilding their finances and their futures. Conflict and loss usually set people back years. Without access to resources, rebuilding is slow and difficult at best. SILC allows people to pool their money and provides members with immediate access to investment capital. These are essential benefits that traditional banking systems don't offer the working poor, who lack access to collateral and other resources in the aftermath of a conflict or emergency.

We seek daily renewal from the source of all life, and so we pray ... END_OF_DOCUMENT_TOKEN_TO_BE_REPLACED

Our walk with God is reflected in our walk with others, and so we pray ... END_OF_DOCUMENT_TOKEN_TO_BE_REPLACED