Most formal financial institutions are unable to reach the world’s poorest people, who greatly need access to appropriate and affordable financial services. Catholic Relief Services’ microfinance programs in developing countries work through microfinance associations and their member institutions, as well as with informal or community-based savings groups.

Both approaches encourage clients to save and to borrow for investments in income-generating microenterprises. Both reach very poor households and communities, and help to create a sustainable financial base for local community development.

CRS microfinance programs in developing countries place a major focus on savings-led microfinance—helping community members to form groups, pool their savings, and make loans to each other.  This approach has created economic opportunities for more than 3.2 million people who live in the world’s most impoverished areas.

CRS provides training and capacity strengthening to new savings groups, using a highly sustainable fee-for-service, market-based, agent approach. Upon completing their first 12-month cycle, groups can operate on their own. The subsequent cycle begins immediately after the shareout meeting, making the end of the previous cycle. Some of these groups are now in their ninth cycle.

Learn more about our savings groups. 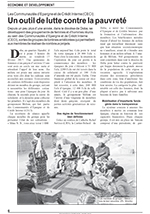 For just over a year, in the Diocese of Doba, Chad, groups of men and women have met in Savings and Internal Lending Communities (SILC), a type of improved tontine that allow for the implementation of numerous projects.

Our programs develop community-led and managed savings and lending services. We link the poor who have limited or no access to capital in the formal financial markets to additional financial (microinsurance) and non-financial (financial education. marketing basics, business basics for microenterprise, and agricultural extension) services. In fiscal year 2016 these savings services supported beneficiaries through 77 projects in 34 countries.

Capacity at a Glance

Learn more about how we work 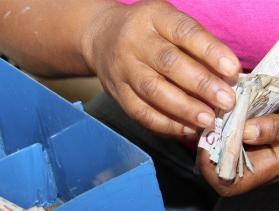 Among the 30 Haitians who meet every Saturday afternoon in Port-au-Prince, you can find the entire history of their country. Their triumphs, losses and... END_OF_DOCUMENT_TOKEN_TO_BE_REPLACED 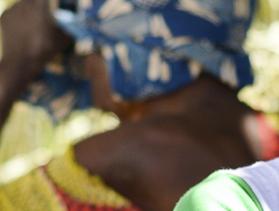 Bring lasting change to children and their famlilies. Become a regular donor and for just 80 cents a day, you can make a difference!