The Simple Life and the Grand Impact of IRA Rollover Gifts: Tony and Jackie Staley 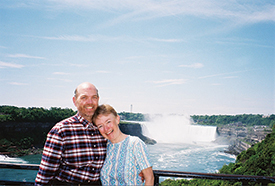 It was the day after their wedding, and the Staleys were packed tightly in their car, driving halfway across the country to start their life together in Green Bay. It was February, and people warned of snow, but they knew there’d be no storms ahead.  They’d just married in their beloved, downtown Portland church, a diverse parish without much money that reminded them of all the good in the world—and all the good they were called to contribute.  Jackie, a religious studies teacher, and Tony, a newspaper editor had that in common: the desire to lead a simple life, and to give what they could to those less fortunate.

“We saved not so we could have more but so we could share more,” says Jackie. “Spending for yourself doesn’t always make a person happy. Of course, the other extreme is a very poor person who doesn’t have enough to survive.”  These are the people the couple was drawn to help, including those overseas. “Charity begins at home but it doesn’t end there,” says Jackie. “With the wealth of our country comes responsibility.”

This belief is part of what attracted them to Catholic Relief Services. “I like the way CRS does things,” says Tony, “reaching out both when humanitarian relief is needed and for day-to-day things like water, agriculture, education and microfinance. I think we have an obligation to people around the world.”  And more than just a good mission, CRS is a responsible steward too. “I have confidence in CRS,” Jackie says. “I researched objective sources and CRS is known for low administrative costs, which means more of your donation goes to those in need. I know the money will be used well.”

So how is a modest Wisconsin couple practicing the “simple life” able to help CRS?  They have been able to utilize a planned giving tool, the IRA Rollover, to be able to match their desire to help to their capacity.  This has allowed them to give more than they would have been able to do through outright cash gifts.

With the IRA Rollover, individuals who are over 70 1/2 can transfer funds from their retirement account directly to charity —up to $100,000 per year. That means that no matter the size of your portfolio, you can give on a grand level. And it’s all tax-free.  “It’s very easy to do. It’s just a matter of doing it,” says Jackie. “As soon as you take out money from your retirement — which you’re required to do — that money is taxed unless you make a charitable distribution to a qualifying charity such as CRS.

You might look at your income and say, ‘Do I really need that money now?’ And if the answer is ‘no,’ then why not use this tool? It’s there and it’s a good one.”  Tony adds, “It’s painless and convenient, and you’re helping bring a better life to others.”