With a second year of harvests having now failed in most parts of Zimbabwe, the country is a prime example of how El Niño is devastating Southern Africa. Some 2.4 million people in Zimbabwe, or one-quarter of the entire population, are going hungry and the next maize harvest will not come in for another year. According to the United Nations, 14 million people across southern Africa are facing a lack of food.

Last year, grain harvests–maize, sorghum and millet–were estimated to be half what they were in 2014. As climate change creates a hotter, drier environment, crops wilt or never germinate at all. For 2016, according to the U.N. Food and Agriculture Organization, new planting is down by a third, and El Niño is expected to worsen hunger considerably as food stocks run out. 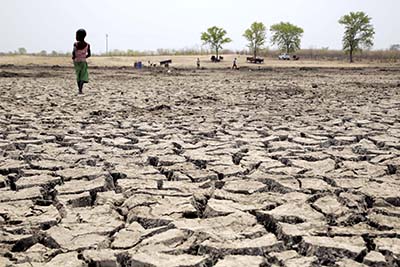 A child walks across a stark landscape, once a watering hole. Now water can only be found by digging deep into the last remaining spots of mud. Still, with water so scarce, people continue to bring their animals here to drink. Photo by Nancy McNally/CRS

“The rains came about a month late and there was this sense of relief, but then a week later they stopped,” says Gwinyai Chibaira, program manager for agricultural livelihoods at Catholic Relief Services in Zimbabwe. “There have been erratic showers here and there, but nothing that would actually sustain any sort of agricultural activity. [When the rains finally came] the sense of urgency was somewhat lost. International attention especially shifted elsewhere, and now we are entering a major food crisis.”

Varieties of maize grown here require three months of regular, abundant rainfall for a good harvest. Harvest time should be about to begin, but without irrigation the vast majority of farmers will have nothing.

In Gokwe, a town of about 30,000 people in north-central Zimbabwe that once was a center of cotton production, water sources have run dry. Cotton is actually better suited to this climate but when that industry largely collapsed in Zimbabwe years ago, farmers began switching back to maize. But for two years now that crop has largely failed.

“I harvested nothing last year,” says Fortunate Maangla, a mother of four living in the rural countryside near Gokwe. “We’ll be dead if somebody doesn’t help us.”

Even if it were to rain right now, Fortunate says she has no seed to plant. This was the refrain from farmers across the countryside: no harvest last year, no seed, no money to buy seed, no seed to buy in the shops anyway.

Any and everything edible

Fortunate and her family and neighbors say they survive on the fruit of the drought-resistant baobab tree. But it offers very little substance. Inside the fruit’s hard shell are a series of irregular, cube-like kernels covered in a white, powdery film with a sweet and sour taste that can temporarily quell hunger pangs. Yet even those are running out.

“We eat one time per day,” she says. “We eat at night, because if we cook breakfast or lunch during the day and people see us, we’d have to invite them to come share the meal.” 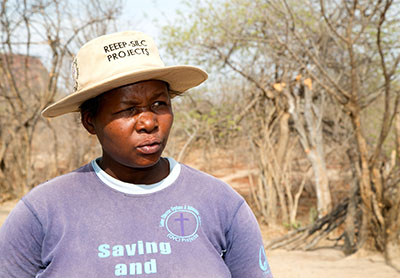 Fortunate Maangla is waiting for the rain, but even if it were to rain, poor harvests have left her without seeds to plant. Still, she prays for rain, she says, because without it, ‘we’ll all be dead.' Photo by Nancy McNally/CRS

The family makes a porridge from the powder of the baobab seeds. Fortunate also has a few chickens she can sell to buy maize meal, but as more and more people turn to selling increasingly skinny animals, they must sell at lower and lower prices. For Fortunate and others, selling animals is usually the last resort. After that, there is nothing left to sell for food.

In the even drier southern regions of Zimbabwe, where farmers largely raise livestock, animals are dying off.

“In November, sheep and goats were fetching a price of about $35,” says Chibaira. “Now a cow is selling for more or less the same price. Normally they are much more expensive than sheep and goats. That tells you a lot about the condition of the animals.”

Even during years not impacted by El Niño, maize crops currently fail three out of every five years due to climate change.

Sibongile Moyo, a farmer in the hot, dry lowlands near the border shared with South Africa, says her maize harvest failed again this year. She survives thanks to the animals she sells. She also has a borehole, and she conserves the water for her family and her surviving livestock. Yet without any grass to eat, six of her cattle have starved to death since July, leaving her with 15 remaining animals.

Drop-out rates spiking due to hunger

Drought now permeates every aspect of people’s lives in Zimbabwe.

David Mwaitomupi, the acting principal at Chidoma Secondary School, gives one example. “We’ve had students falling unconscious in school. Some [students] walk several hours home and go to bed without eating. Then they wake up and walk back to school again with nothing in their stomachs,” he says, noting that the school has no money to provide meals.

“We are seeing [students] drop out. They cannot pay the fees to sit their final exams and, once they drop out, they drop out for good,” Mwaitomupi says.

Yananisai Moyo, a program officer working on education with orphans and vulnerable children for Gokwe OVC, CRS’ local partner, says girls suffer most from the consequences of drought.

“The girls, rather than the boys, will be pulled out of school to help try to earn some money at home,” Moyo says.

Worse yet, girls will be pulled out of school and married off, she says. In Zimbabwe, child marriage is illegal, but desperate families will marry their young girls to the highest-paying suitor, hoping the dowry will feed the rest of the family.

It also means one fewer mouth to feed.

CRS is partnering with Caritas Harare in Zimbabwe to react quickly to the drought emergency. In December, CRS and Caritas organized a series of seed fairs, helping provide farmers with seeds for drought-resistant, quick-growing crops. Cowpeas, for example, can reach maturity in just two months with even limited rainfall. Lablab, a crop grown mainly to feed livestock, is also extremely hardy and provides protein and essential amino acids. Sorghum seed is also being distributed, which is resilient to hot, dry climates.

CRS and Caritas are also training farmers to grow new crops and conserve water and soil. Some 35,000 vulnerable people in the eastern district of Mudzi will benefit. Farmers will set aside a portion of their land for their new crops, reserving the rest to grow maize. The hardier, supplemental crops will compensate for expected losses and provide new sources of nutrition to farmers and their families.

Find out more about CRS' work in Zimbabwe.

Learn how CRS is addressing climate change concerns around the world.

August recess is a key moment to meet with your members of Congress while they are out of session... END_OF_DOCUMENT_TOKEN_TO_BE_REPLACED

Use this calendar for key dates to reflect and take action with your community to address climate... END_OF_DOCUMENT_TOKEN_TO_BE_REPLACED