Although COVID-19 has jeopardized many Rwandan businesses, CRS Rwanda continues to support young entrepreneurs in the country. Huguka Dukore Akazi Kanoze—or “Get Trained, Let’s Work” in Kinyarwanda and abbreviated as HDAK—is the name of a project funded through the U.S. Agency for International Development. HDAK prepares young Rwandans to engage in new business and cooperative ventures in a variety of industries. The project includes vocational training and community organizing through cooperative savings groups among its activities. 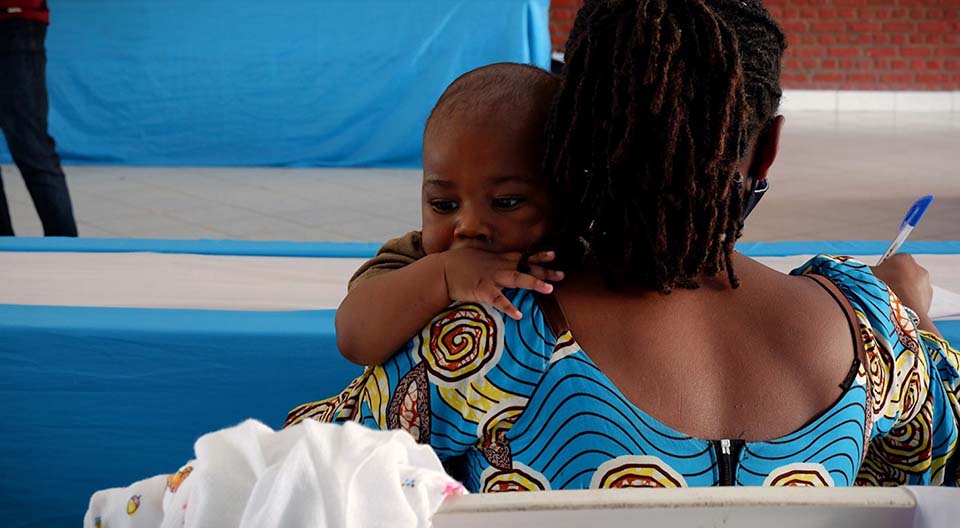 A woman holds her child while participating in a conference for savings group service providers. CRS makes a special effort to ensure its projects are inclusive and accessible to young mothers.

However, with the economic uncertainty brought by COVID-19 even successful HDAK participants struggle to grow their businesses at a time when financial institutions are less willing to lend money—especially to fledgling businesses like those created through HDAK. In response, CRS stepped forward with a plan to further support its participants through a contest that would provide winners with additional financial capital. The contest allowed participants to advocate for their cases based on need. A panel awarded grants to the most effective and innovative cases. Using online platforms to reach participants, CRS awarded a total of $34,800 to 648 young entrepreneurs from 104 businesses. 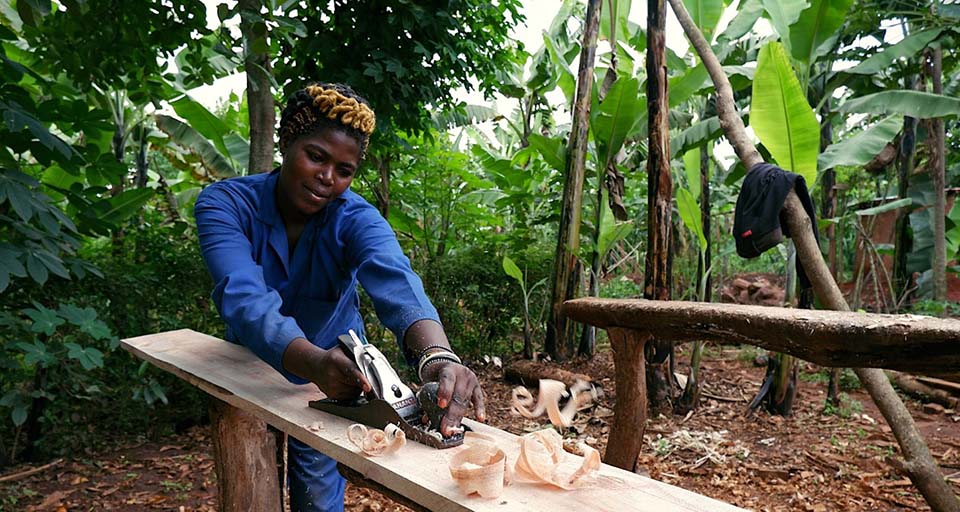 A contest winner using a new planer purchased through the recent capital infusion. The business wants to increase its production capacity to meet local demand and employ more members of their community.

Since receiving these funds in March, contest winners have already begun putting the capital to good use. In the Kirehe district, carpentry group Urugero rw’Abakozi has invested in new woodworking tools, allowing them to grow the size of their group to six people with plans to expand. Since beginning the cooperative’s work in 2019, Alex Ntibagirimbabazi has also received a loan to purchase a bicycle—an important piece of transportation in Rwanda’s hilly terrain.

Another member, Jean-Baptiste Habamungu, had major life changes of his own thanks to skills learned through the project.

“After learning how to save, I bought a field … renovated my home and got married.” 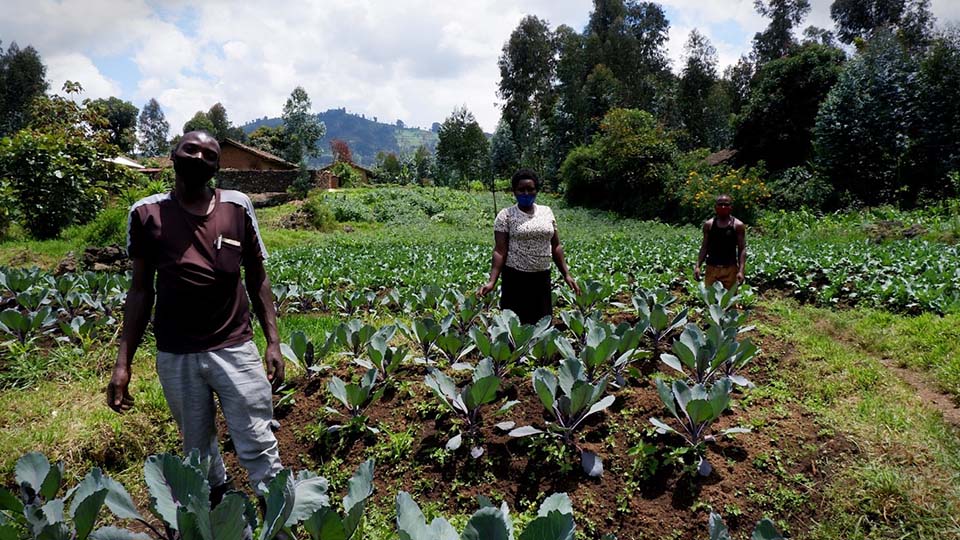 Agricultural group Twiyubake Rurengeli grows a variety of crops in their field outside of Gisenye. The 23 members, who are mostly women, now earn anywhere from three to six times more income than before beginning their operations in early 2019.

The effects of the project extend beyond just the participants. Hakizimana Eraste, nicknamed “The Big Chick” in his community near Rubavu district, is a 2018 graduate of HDAK. Previously unemployed, he started with a single chicken and now manages two coops with 2,000 chicks in total.

With his new success, he works with youth groups by sharing the skills he learned through HDAK. He gives the project significant credit to his success.

“Before participating in HDAK, I didn’t have much direction. Before the training, I would recognize potential. But afterwards, I had the confidence to pursue my ambitions. I attribute 98% of my success to HDAK,” he says.

He currently plans to supplement his chicken farming venture, which earns approximately $400 each quarter, by building a pigsty to facilitate pork production. 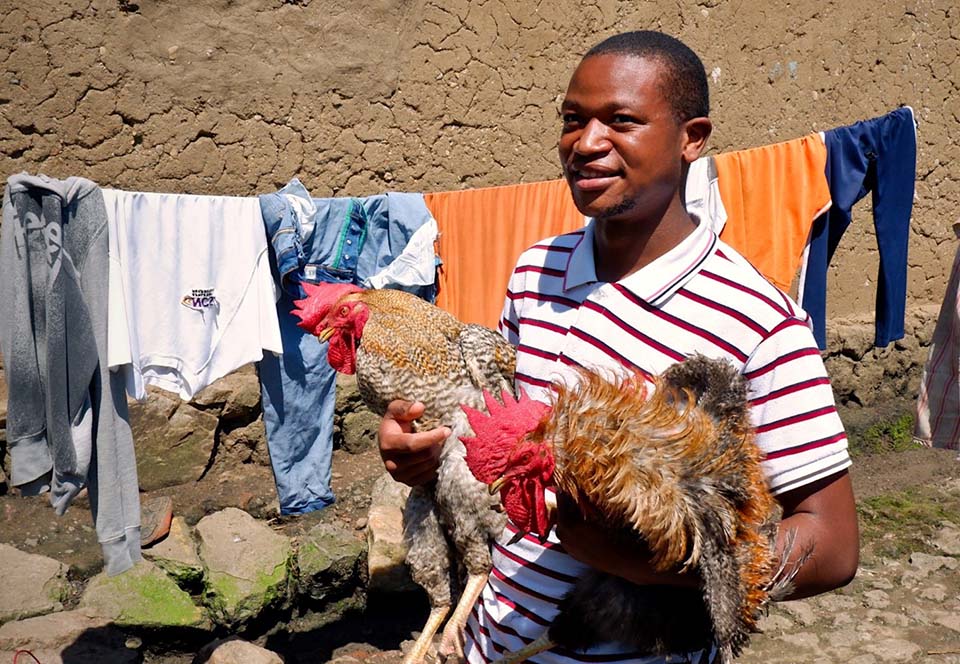 HDAK participant Hakizimana Eraste, “the Big Chick,” outside his home with two of his prized roosters.

“The selection [of contest winners] was transparent with the involvement of different stakeholders such as district, partner and youth representatives,” he says.

The infusion of capital marks the end of CRS Rwanda’s HDAK project, though CRS looks forward to continuing its work supporting Rwanda’s young people. Following final reporting, the project is expected to have supported 40,000 young people in 25 of Rwanda’s 30 districts by the end of fiscal year 2021.

Those numbers build on 15 years of CRS youth programming in Rwanda, together with government, private sector and church partners.

“CRS Rwanda envisions being among the leading organizations in youth programming in Rwanda,”Alphonse says agricultural group Twiyubake Rurengeli grows a variety of crops in their field outside of Gisenye. The 23 members, who are mostly women, now earn anywhere from three to six times more income than before beginning their operations in early 2019.