Year of Mercy and Freedom From Fear 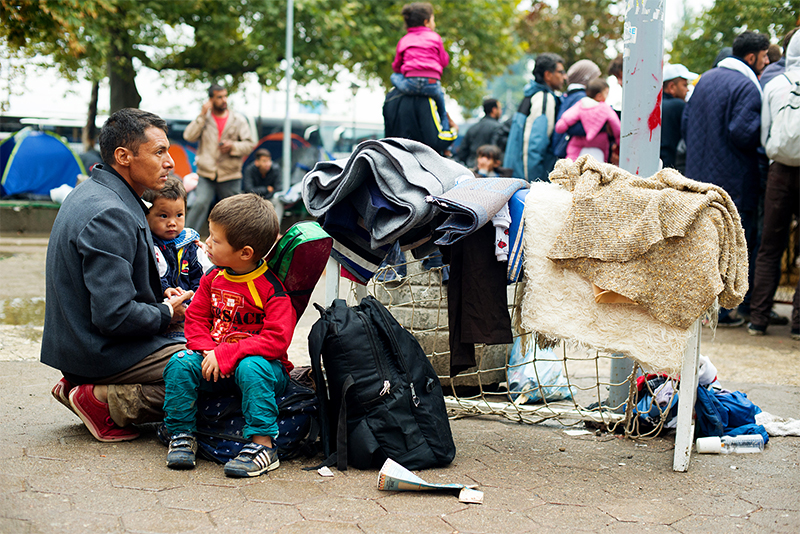 Refugee families wait for transportation to the Hungary border at a park in Belgrade, Serbia. Photo by Kira Horvath for CRS
Last June, I walked the Camino de Santiago, an ancient road in northern Spain that leads to the shrine of St. James in the city of Santiago de Compostela. Two parishioners and I journeyed almost 70 miles over 5 days, through dense forests, farmlands, over hills and creeks, and through quaint towns. It was humbling to walk in the footsteps of millions of pilgrims who traveled hundreds of years before us. Even though it was a safe route, there were a few anxious and even fearful moments when we took wrong turns or were not sure where we were. Inevitably, there was always a friendly local along the road to point us in the right direction. I was calling them “angels” by the time we finished the pilgrimage.

People make pilgrimages for many reasons—some spiritual, some not. Today, many people are being forced to make long journeys because of war, drug gangs and grinding poverty. We are witnessing the largest global movement of people since World War II. Who will be their angels?

In a world where terrorists threaten our way of life, how can we be angels? First and foremost, we must understand who we are and what we stand for. We must preserve our core values as Americans and as people of faith, even as we secure our nation and participate in a globalized world.

Fear can pressure us to make bad decisions, to abandon our values. If we distrust or reject people of other nations, ethnic groups or religions out of fear, we have lost the battle. We will have surrendered our belief that we are all created equal by God. We will also have abandoned the notion that God is father to us all, which implies an obligation to every sister and brother. In effect, fear will have changed who we are.

Pope Francis has proposed a special Jubilee year beginning December 8, the theme of which is “be merciful like the father.” The Jubilee tradition goes back to the Book of Leviticus. It is like pushing the restart button: prisoners are freed, debts are forgiven, the land is left fallow and right relationships are restored. Christians began celebrating Jubilees every 50 years beginning in the 14th century. Remember the great Jubilee Year of 2000, when Blessed John Paul II opened the Holy Door at St. Peter’s for pilgrims? He especially advocated the forgiveness of the crushing debt developing countries owed to wealthy ones.

Pilgrims during this Jubilee Year of Mercy will pass through the Holy Door, either in Rome or their local diocese. Crossing the threshold is our commitment to passing from sin to grace, a changing of our attitudes and actions to become more like the merciful Christ, who had a special love for the marginalized.

Refugees from the Middle East and Africa and unaccompanied migrant children from Central America remind us of Mary and Joseph’s search for a place to welcome the Christ Child. They suffered much rejection; yet even in a stable, God comes to us. Pope Francis reminds us that when we look at the faces of the poorest and most desperate, we see God.

There are many ways to “be merciful like the father” in our everyday lives. As we begin this Jubilee year, we can be the angels that our pilgrim sisters and brothers need.

Learn how you can be an angel to others throughout the Year of Mercy.

Prayer for migrants and refugees and for those who work to assist them, written by Father Thomas... END_OF_DOCUMENT_TOKEN_TO_BE_REPLACED

Encounter our migrant and refugee sisters and brothers through Scripture, photos and video in this... END_OF_DOCUMENT_TOKEN_TO_BE_REPLACED