Photo by Amit Rudro for CRS

According to the Occupational Safety and Health Administration, commercial fishing ranks as the deadliest of occupations. Mohammad Ali Sikder would agree.

In 2019, Mohammad and 13 veteran fishermen from the southern coast of Bangladesh found themselves caught on the Indian Ocean during Cyclone Fani—one of the worst tropical storms ever to strike the Bay of Bengal. With winds up to 125 mph, waves crashed around the men, and their boat capsized. 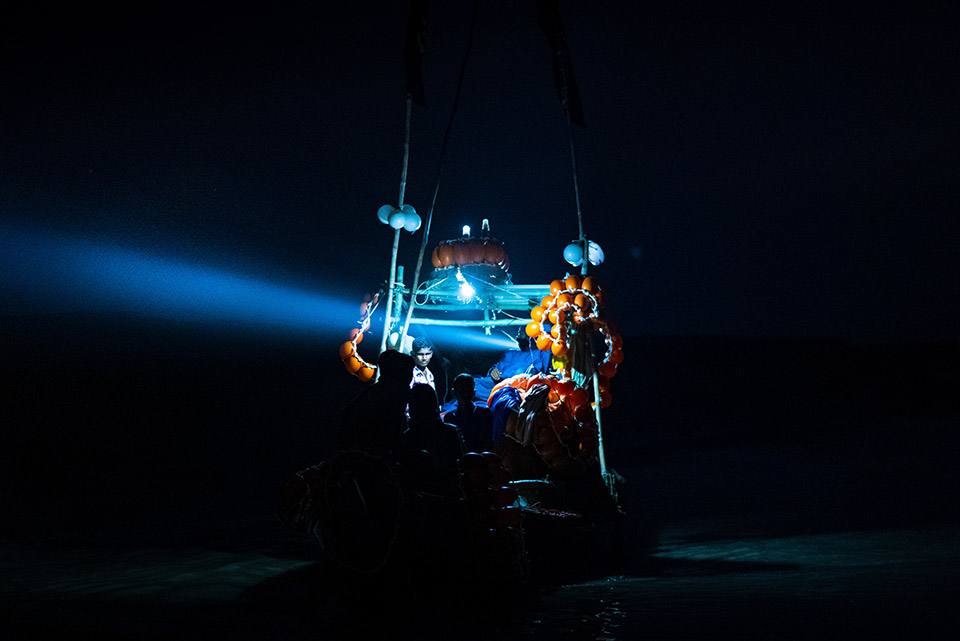 “I immediately grabbed an oil container and the others floated in the deep sea for about eight hours, holding onto water jugs and net floats. The container slipped from my hand at least 25 times and I had to swim again and again to catch the container. It was very difficult for me to hold the container in the strong waves. During that time, predator fish were also biting my legs and different places on our bodies. That day, I thought I would never survive.”—Mohammad 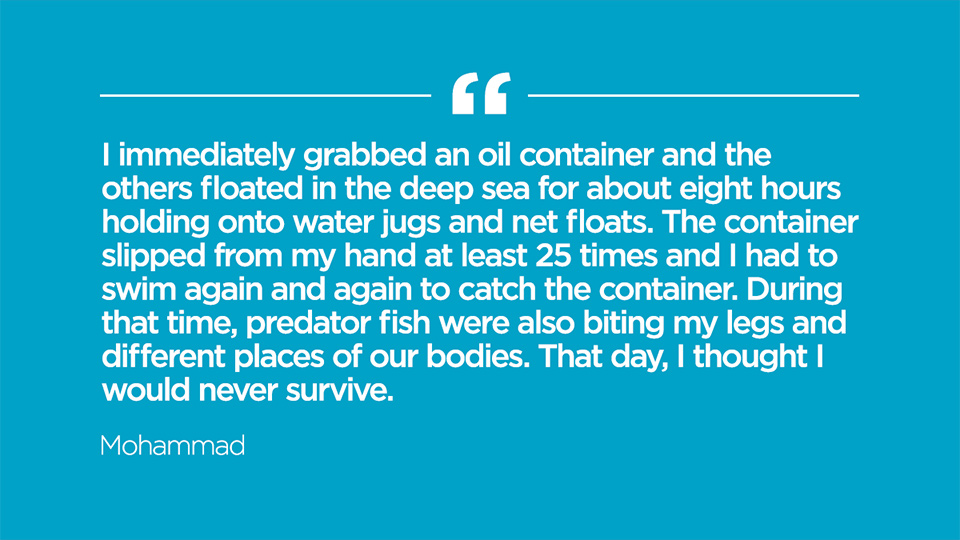 By the grace of God, he and his fellow workers did survive.

But commercial fisherman like Mohammad still face a dilemma—stuck between making ends meet and risking the danger that fishing can entail, especially in unexpected and extreme weather. Mohammad stated, “On May 1, 2019, I went fishing in the deep sea with 14 fishermen at once, moving over four days on the fishing boat.Unfortunately, on May 5, 2019, we were caught by Cyclone Fani.” 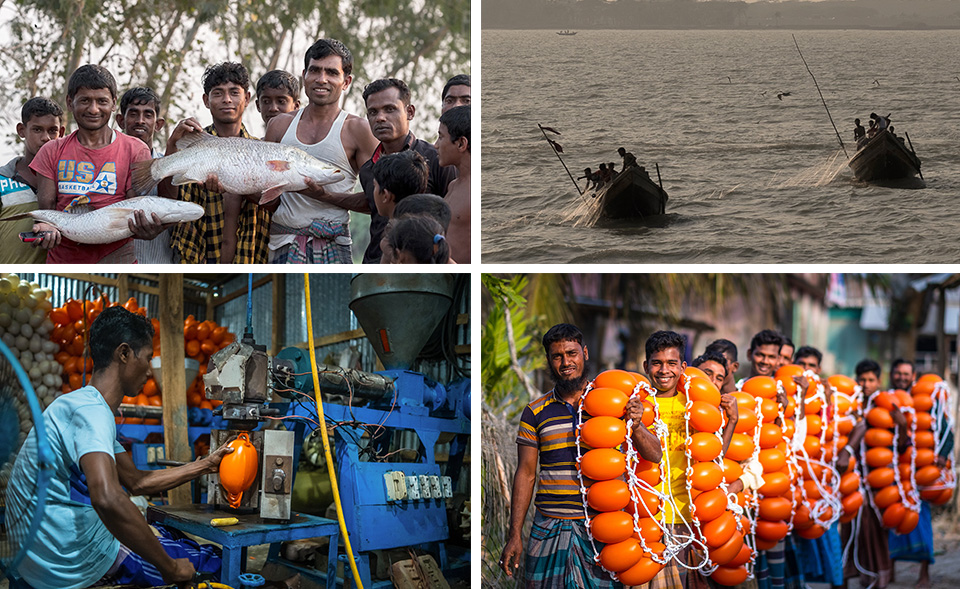 About 1.5 million fishermen work the waters off Bangladesh. Each voyage out to sea is potentially perilous. And every year, more than 1,300 fishermen drown on the job. Many of those deaths can be prevented by lifebuoys—a common device that is not usually available in local markets. To import one costs around $20 each. For these fishermen, who earn an average of $104 a month and struggle to support their families, that price is prohibitive.

Catholic Relief Services and Caritas Bangladesh began working with local fisherman to make lifebuoys more accessible. In April 2020, the Caritas team launched the Make Us Knowledgeable and Trained in Emergency, or MUKTE III Project, which trains communities in emergency and disaster preparedness.

Instead of trying to help fishermen afford imported lifebuoys—which would need to be replaced every few years—the innovative project team collaborated with fishermen and local stakeholders to design and produce lifebuoys made from available materials. At a cost of $4.50 each, these locally made lifebuoys are well within reach for the average fisherman. 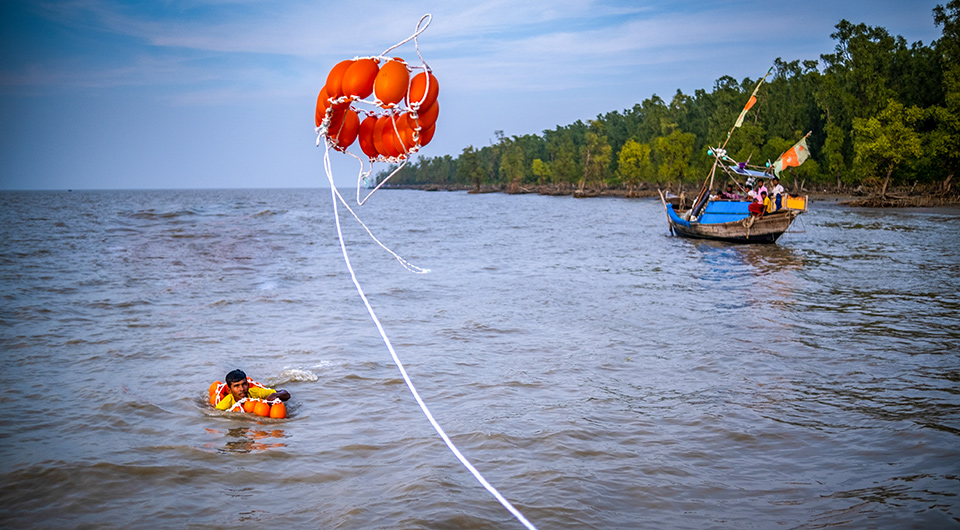 Mohammad has become a champion of the locally made lifebuoy, sharing his story with fellow workers and urging them to use the device. As he recalls his eventual rescue, he knows the lifebuoy would have made the ordeal less hazardous.

“In the morning, a fishing boat located and rescued me near the island of Char Nizam. At that time, I was unconscious. The local village doctor treated me and I regained consciousness after one hour. Then, the fishermen sent me back to my house. If we’d had such lifesaving gear as this at that time, we would not have been in so much trouble and we could have easily survived.” —Mohammad 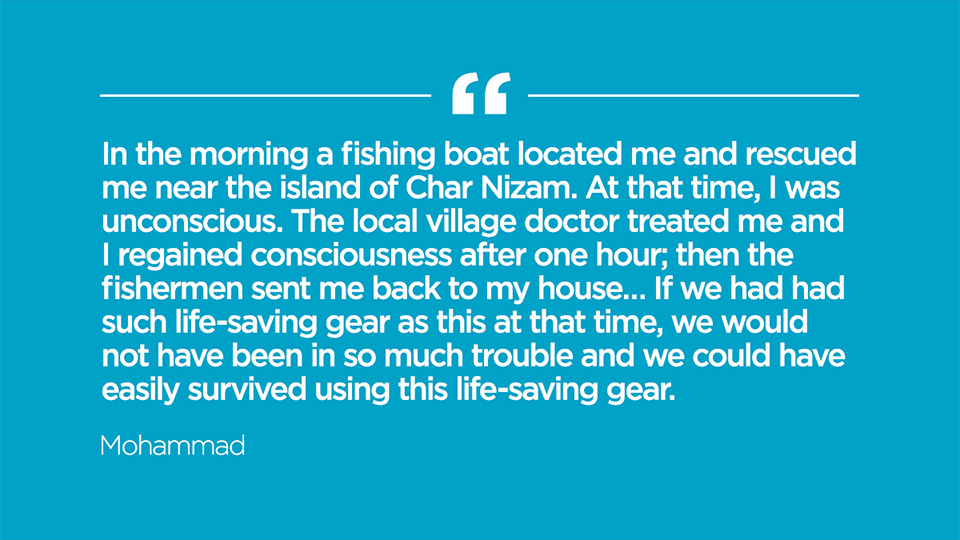 Bangladesh is among the most disaster-prone countries in the world, and cyclones are a regular part of life for residents. Traditionally, the monsoon season in South Asia runs from June through September but has recently become less predictable with climate change.

For example, rains started far earlier in 2022, affecting crops, livestock and infrastructure. In addition to causing more flooding, climate change has posed an especially daunting challenge for countries like Bangladesh, which have had to deal with many more complex, cross-border emergencies. This is evident in the recent devastating floods that gripped Bangladesh and India, affecting over 10 million people.

All photos by Amit Rudro for CRS. Writing by Kamrul Hassan and Benny Manser.

Read the latest update from CRS country programs and partners around the world as they respond to... END_OF_DOCUMENT_TOKEN_TO_BE_REPLACED

Read the latest two-page summary from CRS country programs and partners around the world as they... END_OF_DOCUMENT_TOKEN_TO_BE_REPLACED