Working Together for Peace in Liberia

Fourteen years of brutal civil war. The largest Ebola outbreak in history. Continuing poverty. Liberia is a country that has been battered over and over again. The positive attributes of peace—social harmony, trust and productive citizen-state relations—remain elusive. 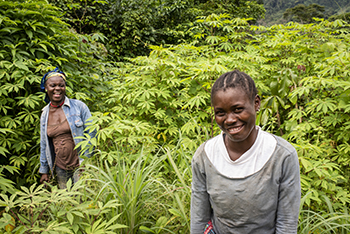 Group farming is a new activity in the community, following a workshop designed and organized by Catholic Relief Services. Photo by Michael Stulman/CRS

But through the tragedies of discrimination, war and disease, its people remain resilient—still eager to work together for a lasting peace, still hopeful for the future.

That was evident in a visit to Catholic Relief Services’ Connect for Peace, or C4P, project workshops that, with funding from USAID's Conflict Mitigation and Management program, are encouraging Liberians to find ways to reconcile, overcome mutual mistrust and live in harmony.

“We were greatly affected by war. Our children were dying. This community was just broken to dust. People fled. No food. No medicine. When you live through war, it affects you,” says Roda Larway who survived the years of violence in Nimba County where the country’s brutal civil war began in 1989. “After the deconstruction, we do reconstruction. We want to live in peace.”

‘We can make peace together’

That’s why Roda is joining people from surrounding communities in C4P project workshops designed to heal the wounds inflicted by that war, wounds that too often, even 15 years later, are still open sores. A 2017 CRS survey of more than 1,500 Liberians revealed deep-seated fears of renewed violence. Respondents cited several factors that could break a fragile and volatile peace, including disputes over land ownership and high rates of youth unemployment.

“Youth would challenge each other. They would fight,” explains program participant Cyrus Yelekor of the violence that was too common even after the war ended. “Because of CRS’ workshop, we’ve learned to respect the youth and hear their voice.”

That’s a key objective of the C4P program.

“Youth have strength and they are key actors. By working together and including the youth, we can resolve conflict,” Cyrus says. “We've talked about conflict management, peace building, land issues. And we exercise what we've learned every day.”

The C4P workshops help people address traumatic experiences, manage difficult discussions about peace and reconciliation, and strengthen the bonds that people have to one another and their community. The workshop also encourages the groups to find one “connector” activity—something that will bring people together and foster lasting trust long after the workshops have ended.

“One person can't make peace,” explains Martha Yelekor. “But we can make peace together.”

‘Peace before anything else’

Cyrus, Martha and dozens of other members of this C4P project created an action plan for their connector activity: sharing a plot of land, farming as a team, and working together every day.

“I used to farm alone—everyone farmed alone,” says Martha. “At the workshop, we decided to do group farming because when people work together, there is less conflict. What happens to you will happen to me.”

The CRS project aims to reach more than 280,000 men, women and youth across Nimba County and around the capital city, Monrovia. These are locales of some of the worst violence during the years of war and areas where lasting peace remains fragile.

But this is just the first step. C4P connector projects should pay off for generations.

“With profits from the farm, our children will go back to school with uniforms and other supplies,” Martha says. With an education, our children can become doctors, nurses, and leaders in the community.”

But none of that will happen without peace.

“If peace isn't here, we can't have development,” Cyrus says. “You need peace before anything else.”

A prayer asking God to help us recognize family in each of His children, to know them as brothers... END_OF_DOCUMENT_TOKEN_TO_BE_REPLACED