Someone had noticed. The neighbors were beginning to talk. Abdurahaman Amin was at a funeral when he first heard the whispers.

“Everyone was gossiping about how I had been making porridge,” Abdurahaman says.

The father of six smiles as he explains how he had broken something of an unwritten law by making breakfast for his children. In rural Ethiopia, traditional thinking dictates that a man’s place is in the fields, while housework is solely the responsibility of women and girls. For most, the thought of a man cooking was unthinkable. 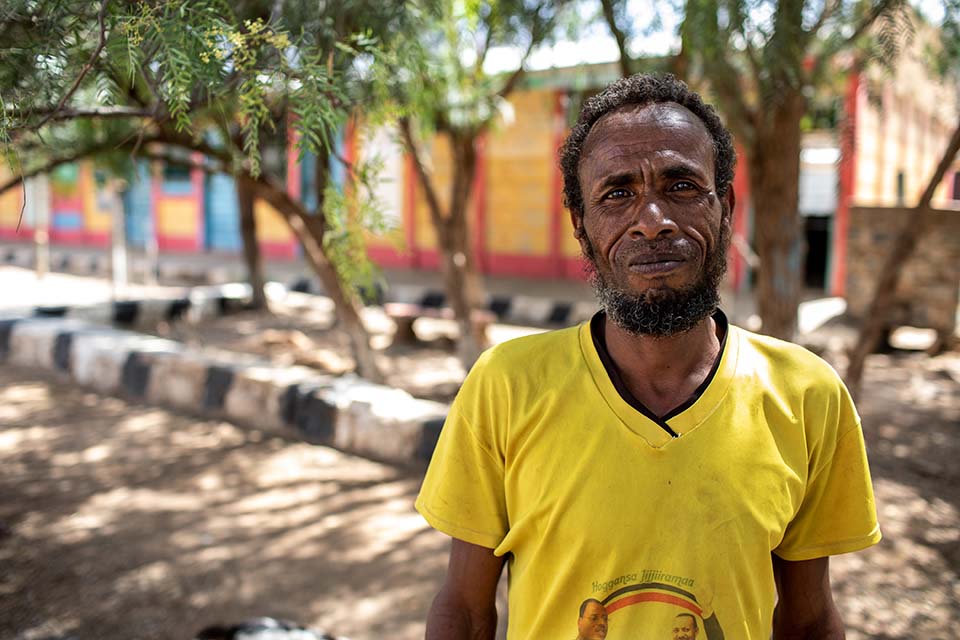 Abdurahaman Amin attends a Community Conversations meeting in Halobusa, Ethiopia. The meetings offer a safe and welcoming environment for discussions about gender and youth issues.

“It is a kind of shameful thing for a man to cook for a baby,” Abdurahaman says, shrugging off the criticism he received from other men in his village.

Abdurahaman knew he’d done something that people would view as taboo, but he was also determined to teach others to do the same. That’s because he has been taking part in Community Conversations organized by Catholic Relief Services and our local partners in Ethiopia. These group meetings provide a forum for men and women to discuss common concerns and problems in their community, identify the root causes and then seek opportunities to address concerns using their own social values and community resources. This approach helps to foster openness, build trust, and promote community-led change.

Community Conversations are part of CRS’ Development Food Security Activity, which is helping to improve food security and diversify household income of 240,500 beneficiaries in nine districts in Ethiopia’s Oromia region and Dire Dawa administration. The five‐year $106 million program is funded by the U.S. Agency for International Development’s Office of Food for Peace, and managed by a consortium of nongovernmental organizations led by CRS Ethiopia. It also includes a $9.7 million contribution by CRS.

Community Conversations can help couples reimagine their relationships, increase joint decision making, and identify areas where they would benefit from sharing responsibilities or altering roles.

Abdurahaman’s Community Conversations group is in rural Dire Dawa, where he gives cooking demonstrations to show other men how to prepare nutritious meals—and rethink gender roles at the same time. He has had to overcome resistance from men in his village and even endure a bit of teasing at times.

“When I demonstrated to the other men how to cook injera, they would shout at me, ‘You are behaving like a woman!’,” Abdurahaman says. 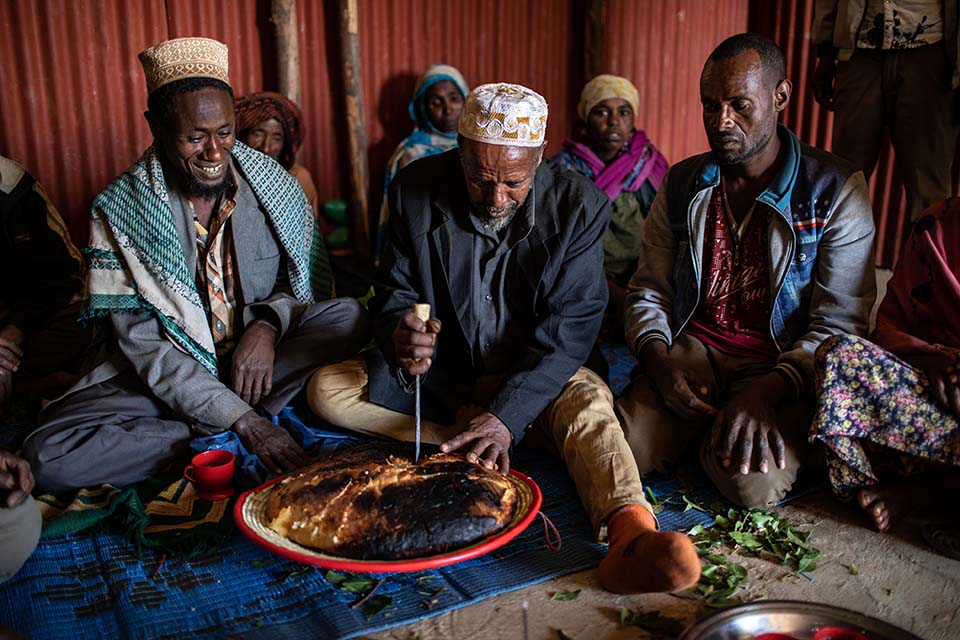 Ahmed Jemal Hassen (center) cuts bread during a cooking demonstration designed to help couples reimagine their relationships and identify areas where they can increase joint decision-making. The groups are engaged in resolving social problems that affect women and girls through community action.

While it may sound like harmless teasing, it really illustrates the impact Community Conversations can have.

“Initially we were scared because everyone was gossiping about us,” Abdurahaman says. “But over time, they came to understand that the division of labor in the house is a good thing.”

“I told them, for example, when my wife is pregnant or breast feeding, I will go to fetch water and firewood to help her,” Abdurahaman says. “My wife has too much burden. So, if I have time, I want to help her to reduce her burden.” Abdurahaman’s wife also helps him in the fields now, he says.

Other men who take part in Community Conversations are following suit.

Support for women and girls

Ahmed Jemal Hassen, who is in his 60s, says he changed his behavior after participating in the meetings.

The program also mobilizes labor to support widows with their farms, encourages families to send girls to school, secures agreements on women’s and girls’ inheritance rights, and educates people about the impacts of practices such as female genital mutilation, gender-based violence, early marriage and polygamy. 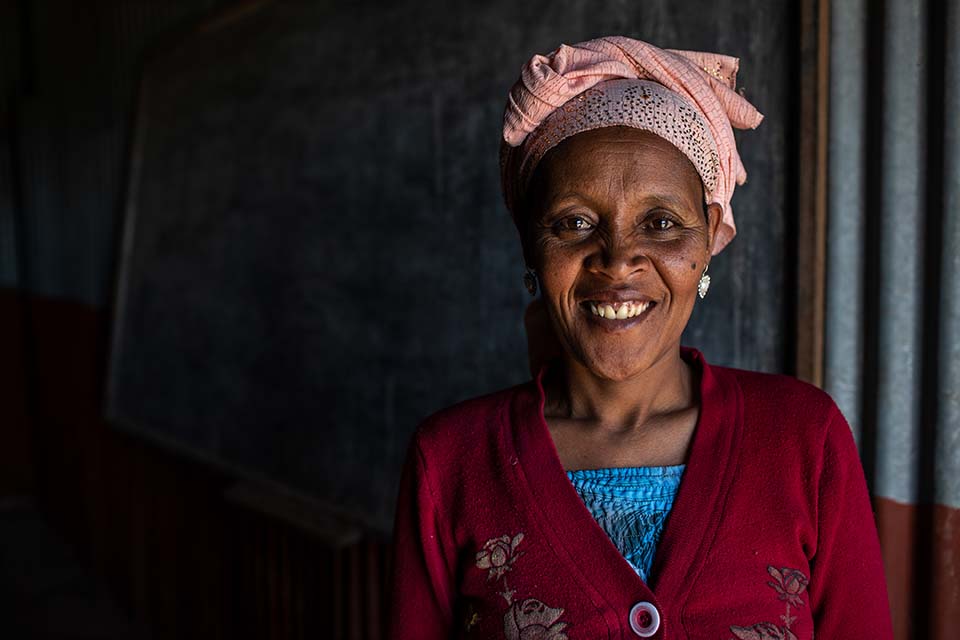 Tinebeb Admasu was married at age 16, and has five children. Now she is promoting the balance of gender roles in decision making, and helping her community resolve issues through dialogue.

Tinebeb Admasu, the leader of a Community Conversations group in rural Deder District, says that her community has made great strides as a result of their open discussions.

“People are no longer marrying off their children early. There is no [female genital mutilation] in my area. I explain to them that those practices are harmful and illegal,” she says.

Ahmed, who is a member of Tinebeb’s group, recently turned away a suitor who wanted to marry his teenage daughter.

“Someone proposed marriage to my daughter, but I refused. She was 14 then. Instead, I am sending her to school,” Ahmed explains. “Instead of just being a farmer, I want her to have a profession and expertise in some area.”

Rigid gender roles put women and girls at a significant disadvantage in terms of education, health, jobs and basic human rights. It also places a significant burden on women and girls, who are expected to sacrifice personal needs while handling all the household responsibilities. 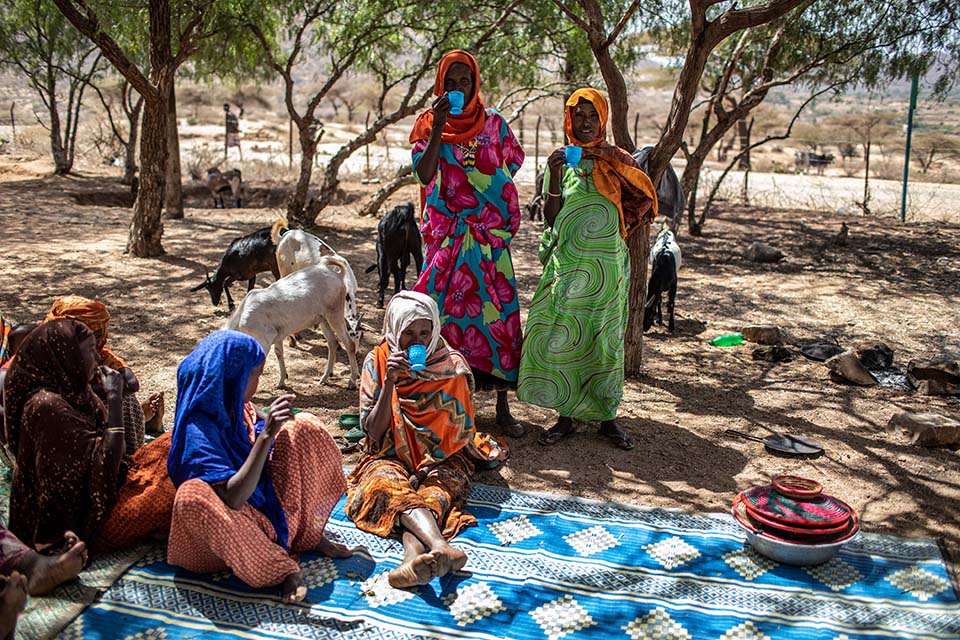 Halo Abdulla, standing in center, and other women drink coffee prepared by men in the village as part of a program that includes support for widows, encouraging education for girls and other rights for women and girls.

Abebe Yilma, a gender expert with CRS partner Hararghe Catholic Secretariat, explains: “Culturally, the view is that the father and brothers cannot help the mother with household chores. Only the girls can assist throughout the day. They help with all the household work. Meanwhile, the boys are free to study or play. So when girls go to school, they are tired. Or because they don’t have time to study, they fail their exams. This sometimes leads to drop outs,” Yilma says, adding that when girls drop out of school it puts them at heightened risk of early marriage or early pregnancy.

“We have to change the attitudes of the community so people understand that a brother can help his sister in the home,” Yilma says. “Slowly, we are seeing some changes. There have been improvements.”

“Previously, the burden was on the girls to do all the housework and the boys would just do their schoolwork,” says Meftua Abdosh, who also takes part in the Community Conversations. “But now the girls have more time for their studies. By doing this my daughter has improved her performance in school.”