"What we must do is find ways to give women and girls the resources, training, support and space they need to grow." – Dr. Carolyn Y. Woo, President & CEO of Catholic Relief Services 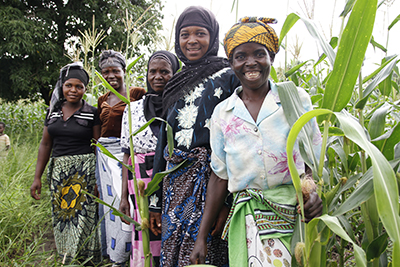 Agness, Annie, Mariam, Rose and Asiyatu farm together in a communal field in Malawi. Together they are reducing hunger and poverty in their village. Photo by Megan Collins for CRS
Women around the world are making strides in their professions. Whether she is a CEO in the United States leading a business into the future, or a farmer in Africa overseeing the production of her crops, women are assuming roles that transcend prescriptive customs and norms. It hasn’t been an easy road, and credit goes to many courageous women who broke the mold. One such woman was St. Teresa Benedicta of the Cross, also known as Edith Stein.

Edith’s search for meaning in life sent her on a spiritual journey that began with her family’s Jewish faith, transitioned into atheism and ended with her conversion to Catholicism. With Edith’s deepened faith, she became a Carmelite nun, studied theology and wrote several books sharing her gifts as a brilliant thinker before her death by the Nazis in Auschwitz in 1942.

She described her gifts as innate to all women, writing, “Women naturally seek to embrace that which is living, personal and whole. To cherish, guard, protect, nourish, advance growth is her natural maternal yearning.”

This “maternal yearning,” distinct in nature, is a physical and spiritual power so great, it can be the agent of change in societies.

Sadly, women are still overly represented in the ranks of the poor. Women account for 70% of the population living on only $1 per day. And yet, when given the tools and resources for success, they represent the key to health and well-being in families around the world.  Their instinct to nurture and protect will benefit whole communities and change their destinies.

Take for instance a pigeon pea farmer in Malawi. She’s not just a farmer, but a wife, a mother and a daughter from a poor village where families are often hungry. And despite the fact that she is denied the official authority to make decisions, she sees the needs of her people and uses her gifts to provide for her family and village. She is eager to make a better life, not just for herself.

Many women like this recently joined a CRS marketing club designed to help farmers like her learn the business of farming. Through our program, focused on advancing wellness and agriculture, clubs teach farmers in southern Malawi business practices and market trends. Women are given opportunities for influence in their clubs, allowing them to have a voice in business and household decisions.

Women represent more than half of club members and hold three out of five major leadership positions: vice chair, secretary and treasurer. Communities are seeing increased incomes and bigger harvests because men and women are working together to feed their village.

The clubs also give members the influence and knowledge to plan and achieve long-term goals. For example, after introducing a new chili crop, a more profitable cash crop in their region, farmers are now reaching new heights. As one farmer says, “Before I relied on my husband financially. But now I am also participating and am able to do business. I’m able to do whatever I want to do with the money I earn.”

Investing in women is beneficial to everyone. As Edith Stein reminds us, “Thus the participation of women in the most diverse professional disciplines could be a blessing for the entire society.”

Help Empower Women Around the World

We seek daily renewal from the source of all life, and so we pray ... END_OF_DOCUMENT_TOKEN_TO_BE_REPLACED

Our walk with God is reflected in our walk with others, and so we pray ... END_OF_DOCUMENT_TOKEN_TO_BE_REPLACED