Water for Schools in Burkina Faso

At your school, getting a drink of water meant going down the hallway to the water fountain. You could wash your hands in the school lavatory. But for the students at the Goradji School in Burkina Faso, getting water means walking more than a mile. 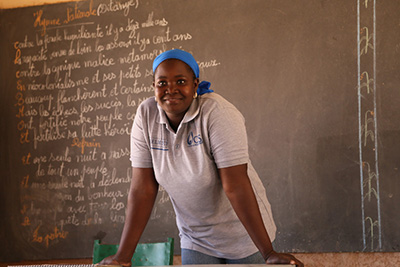 Students in Aghiratou Sawadogo's fourth-grade class are learning about sanitation and hygiene. Photo by Michael Stulman/CRS

That's because Goradji, like most rural schools in this West African country, does not have running water.

"The kids have to walk 2 kilometers to get water, usually during recess," says Seydou Sawadogo, father of a fifth-grade boy and a second-grade daughter at Goradji. "They can miss class because of the long distance."

Catholic Relief Services' Kom-Yilma project, supported by The Leona M. and Harry B. Helmsley Charitable Trust, is investing in critical water infrastructure so that schools in Burkina Faso, like Goradji, have safe and reliable water.

A critical part of the project is ensuring that community members can operate and maintain the water systems. So CRS has also helped train parent associations to deal with management challenges. Seydou is treasurer of the committee in Goradji.

The lack of water not only impacts class attendance, it also affects health. "There have been a lot of illnesses among children at school, because hand-washing is a challenge," says Seydou. Effective hand-washing can significantly reduce the risk of diarrhea. Although it is preventable and treatable, diarrhea has killed more children globally than AIDS, measles and malaria combined.

Seydou has gone through the CRS training on good water, hygiene and sanitation practices. This includes key practices like using improved sanitation facilities, washing hands with soap after using toilets and before eating, and drinking safe water.

He points to a borehole currently being drilled as part of the Kom-Yilma project. "This will be a huge help," he says. "It will help with hand-washing, and rinsing the latrines. It will help with preparing school lunches, and the water can even be used for gardens." 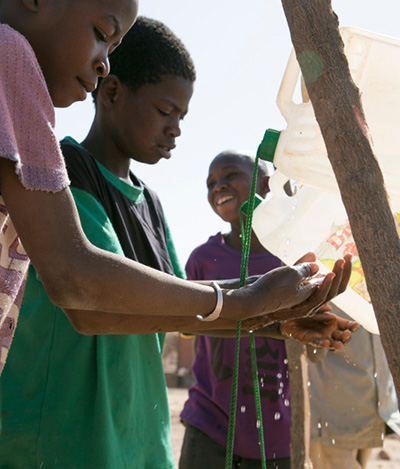 Students use a "tippy tap" to wash their hands at a school in Burkina Faso. Photo by Michael Stulman/CRS
The Kom-Yilma project will construct 57 boreholes with hand pumps and 114 three-stall latrine structures.

But just as important, Seydou points to a jug of water, some string and three pieces of wood, a contraption known as a "tippy tap." It is a simple and inexpensive hands-free wash station for students to practice good personal hygiene. Such "small doable actions," which are inexpensive but effective, are fundamental components of the Kom-Yilma project.

The long-term effectiveness of improved water, sanitation and hygiene depends not just on access to the right infrastructure, but also on using it properly. Will Goradji students do that?

Those in Aghiratou Sawadogo's fourth-grade class would say yes. One of them, Belkissa Ouedraogo, shows that she has learned her lessons well. "If you don't wash your hands, it can make you sick, cost your parents money, and they can miss work," she says.

The Kom-Yilma project has trained hundreds of teachers so they can integrate good hygiene practices into their school lessons.

Key to it all is access to clean water.

"With water, you'll see a lot will change," says Seydou. "We can do a lot more. You'll see less illnesses among children."

HELP BRING CLEAN WATER TO WHERE IT'S NEEDED MOST

The Water for Life video illustrates the work of Catholic Relief Services in partnership with the... END_OF_DOCUMENT_TOKEN_TO_BE_REPLACED

An activity that requires participants to carry water, joining them in solidarity with people who... END_OF_DOCUMENT_TOKEN_TO_BE_REPLACED