For Dikame Bachere, a wife and mother of five, access to water has become the foundation for gender equality.

In Dikame’s community in Central Ethiopia, women have traditionally been the ones to fetch water. In the past, Dikame and her young daughter would wake up at 6 a.m. each day to walk 3 hours to the nearest pond. There they would fill 25-liter jerry cans with dirty water, then repeat the journey home – a 10-kilometer round trip.

Global standards state every person needs access to 15 liters of water a day for all their basic needs. Dikame’s family made do with far less.

“Back then, my husband, 5 children and I relied on the 50 liters of water a day for drinking, cooking and washing essential utensils,” she says.

Additionally, meals in Ethiopia are eaten just using hands, “but there was not enough water to be used for personal hygiene, and washing hands before and after meals” Dikame says. For her family, skipping handwashing means not just a lot of mess, but a real risk of infection and sickness. 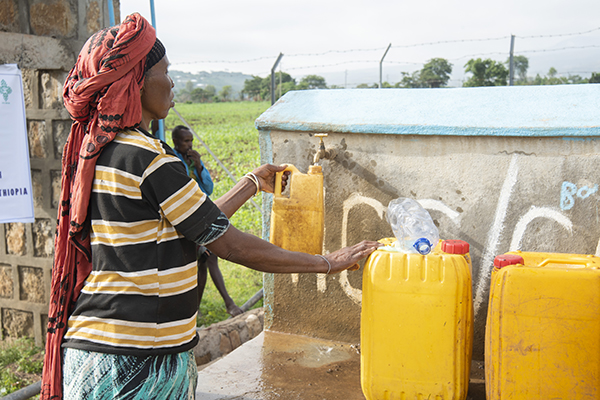 A woman draws water from a well provided as part of a CRS multi-village project in Ethiopia. Photo by David Snyder/CRS

Launched in 2015, the project serves 7,500 people with access to safe and reliable water and improved hygiene by providing water points, public shower facilities, cattle troughs for the community’s livestock, and outhouses for the local schools.

Using an integrated community and government led approach, CRS and partner agency Ethiopian Catholic Church-Social and Development Coordinating Office of Meki, built 7 water points, each with 6 faucets.  For ease of access, a new road to each water point was also built. Now, every resident in the project area is within 1.5 kilometers of clean water – no more than a 45-minute walk round trip.

Using a donkey cart for transport, Dikame’s family now fills a 250-liter water barrel with clean water four times each week, increasing her family’s daily use of water by 125%. The family has tripled the amount of clean water they access each week, from 350 liters to 1,000 liters.

Furthermore, there is no social stigma in having boys and men collect water using a donkey cart and water barrel. Men now play an active role in fetching water, making the process more efficient, effective and gender neutral. While Dikame and her daughter used to spend 6 hours each day fetching water, household members now take shifts throughout the week to collect water in just an hour.

The impact of the project has been dramatic. Since she no longer needs help fetching water, Dikame has enrolled her daughter in school, which also has safe water and proper sanitation facilities thanks to the WASH project. Now, her daughter can learn and pursue her aspirations - which go far beyond fetching water. Dikame uses her extra hours each day to support her husband’s livestock production and trade, increasing the household income by 30%.

“Most would say, ‘water is life’. But for rural women who are responsible to get the water, they’d tell you that ‘water is beyond life,’”  Dikame said.