A group of women in spandex and flip flops talks under a mango tree in Rivera Hernandez, a notoriously rough neighborhood in Honduras' industrial city, San Pedro Sula. Nearby, barefoot girls, some without shirts, climb the railings of an empty wooden pen. Across the dirt road, a black bull roots around in the mud-soaked yard of a vacant house. 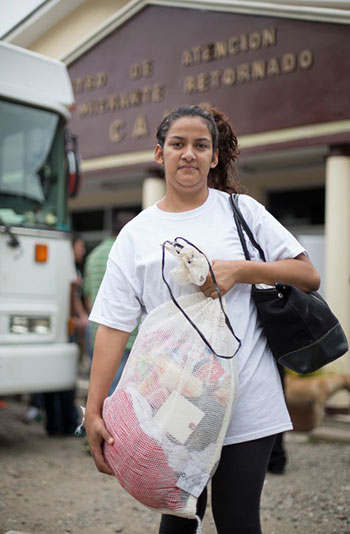 This young woman left her home in Honduras because she was being threatened by gang members, but she was denied an asylum hearing in the United States because her case was not considered credible. Photo by Silverlight for CRS.

It's a typical scene in Honduras' second largest city—including the dead man in jeans. Hog-tied and wrapped in a rice sack, his body bakes in the corner lot under the mid-morning sun. Nobody, including the handful of police standing around, pays the body much attention. There's no tape marking the scene. The police say the station hasn't sent it over yet.

"Violence here has become a sport," says Dinora Rodriguez Perdomo, one of the women standing about. "We see it every day. It's gotten to the point that we're afraid to send our kids to school."

There are more gang members than there are police in San Pedro Sula, the murder capital of the world.

As gangs and drug cartels fight over territory, young people bear the brunt of the violence. CRS' partner Casa Alianza, the Latin America branch of the New York-based Covenant House, estimates that 90 young people are murdered in Honduras every month.

In April, members of the 18th Street gang, one of two dominant gangs operating in the country, beat a 7-year-old boy to death with sticks and rocks. According to newspaper reports, they killed him because his 13-year-old brother, who they also gunned down, had decided to stop acting as a lookout for the gang. The two were among seven children from their neighborhood of San Pedro Sula who were murdered in April alone.

Violence in Honduras and elsewhere in Central America—and a corresponding breakdown of the rule of law—have threatened citizen security and created a culture of fear and hopelessness. This is the overriding factor driving thousands of minors to make the treacherous journey through Mexico to the United States.

The number of youths who come to the United States without a parent or guardian has doubled every year since 2011. It is expected to reach 90,000 this year. With the highest murder rate in the region, this year Honduras has sent the most children north of any Central American country.

"This is a war and the gangs are increasingly preying on children," says Juan Sheenan, CRS country representative in Honduras. "They are completely running different neighborhoods throughout the country and people are petrified."

In recent years Honduras has become a main transit country for illegal drugs from South America bound for the United States. As drug cartels and smugglers carve out their territories, they increasingly rely on gangs to do their dirty work.

Gangs' biggest earnings have traditionally come from extortion, whereby they collect a "protection" tax from businesses, entrepreneurs, bus and taxi drivers, and even individual households. Their involvement in the drug trade means they now have more money to expand their enterprises, which include local drug dealing, auto theft, and contract killings and human trafficking.

As gangs seek control over neighborhoods for local distribution and their own protection, they are increasingly making children their foot soldiers. Children as young as 8 are being recruited to sell drugs or watch for police on streets from San Salvador, El Salvador, to San Pedro Sula, particularly in impoverished neighborhoods where jobs are scarce and domestic violence is rampant.

Two visits from gang members convinced Monica,* 22, that it was time to run. In early February, two men she didn't know showed up on her doorstep in Tegucigalpa, Honduras' capital, for the first time. They wanted her to sell drugs.

A few weeks later, the men paid a second visit, with the same demand. When she refused, they said there would be consequences, and she believed them.

By May, with $73 in hand and her 13-year-old nephew in tow, she was on her way to the United States. She borrowed money from family to pay a "coyote," a smuggler, to get her through Mexico.

It took 15 days to get to Houston. Her nephew kept going, bound for Miami to reunite with his mother, who left El Salvador to find work when he was a toddler. But Monica turned herself in to border agents.

"I turned myself in to ask for help from the United States," she says.

Soon after, an immigration officer interviewed Monica by phone to determine if she would be allowed to move forward in applying for asylum. The "credible fear" interview, which determines whether there is a real possibility immigrants can win an asylum case before a judge, lasted about an hour. Monica did her best to convince the officer that she was being threatened and would be in danger if she were sent back.

One month later, sitting in the same telephone booth at the Houston detention center where she spent 3 months, another immigration official gave her the news. Her case was not "credible."

Claims like Monica's have surged in recent years as violence has escalated across Central America. The number of "credible fear" claims in 2013 jumped more than 250 percent from 2012 and was more than all of the credible fear claims filed between 2007 and 2011, according to an April memo signed by John Lafferty, chief of the Asylum Division at the United States Citizenship and Immigration Services.

In that memo, Lafferty described to immigration officers new guidelines for determining whether a person is eligible for a full asylum hearing. The guidelines are making it harder for those seeking protection to get a hearing.

"This is no different than a war," Sheenan says. "People are leaving, seeking asylum, just like in Europe and just like in Africa. They're coming to the United States, and if we send them back, we're sending them back to a battlefield."

After nearly 3 months in detention in Houston, Monica was sent home.

One morning in late July, she along with three other young women and some 50 men were handcuffed and loaded on to a chartered flight bound for the international airport of San Pedro Sula.

She and the other women were ushered through the processing center first, where they received a cup of coffee and a pastry, medical screening and money to get home.

She owes her family thousands of dollars, which she borrowed to pay the coyote. That weighs on her almost as much as the fear of another visit from the gang.

Before she left El Salvador, she earned about $350 a month giving out samples at a nearby supermarket. She cares for her aging mother who doesn't work because she's clinically depressed.

Her mother has been ill for as long as Monica can remember—definitely since Monica's father was stabbed to death on the street more than 15 years ago and Monica's sister moved to Miami.

"My life was in danger before," she says. "Now I just hope that it doesn't end in tragedy."

In the midst of this crisis, CRS and our partners are providing counseling, shelter and basic supplies to children and families who are being returned to their home countries in Central America. To curb youth unemployment and mounting violence—two major factors in the surge of migration—CRS is helping young people at risk by reducing child labor, helping street children go to school and working with youths in some of the toughest neighborhoods in Central America. We also help small-scale farmers in Latin America increase production—and their incomes— so they are not pressed to migrate to cities or to the United States.

August recess is a key moment to meet with your members of Congress while they are out of session... END_OF_DOCUMENT_TOKEN_TO_BE_REPLACED

Watch videos on the issues of hunger and climate change here. END_OF_DOCUMENT_TOKEN_TO_BE_REPLACED