Their numbers are growing at an alarming rate: Children crossing borders alone to escape desperate circumstance only to find new perils at every step along the way.

The Church and its international humanitarian arm, Catholic Relief Services, see the problem of unaccompanied minors as nothing short of a humanitarian emergency. 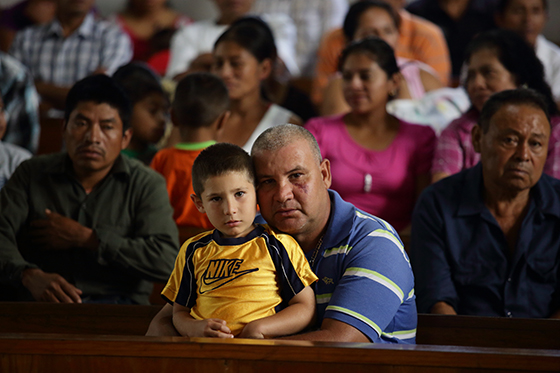 The first step to helping this generation of children on the run is to learn the facts behind this tragic phenomenon.

The legal term "Unaccompanied Alien Children" refers to undocumented children, age 18 and under, who come to the United States unaccompanied by a parent or guardian. A majority come from Mexico, El Salvador, Honduras and Guatemala, where violence has permeated the fabric of their communities.

The dramatic increase of Central American children and teenagers arriving at the U.S.-Mexico border is a direct result of the growing desperation Catholic Relief Services is seeing in Central America. The violence in these communities makes life all but impossible. Gangs recruit children as young as 10. They terrorize students and teachers in schools. And they control whole neighborhoods. Many young people, and their parents, live in constant fear.

Honduras has the highest homicide rate in the world. And Guatemala and El Salvador are routinely included in the list of the world's top five most dangerous countries. There are far more gang members than police officers in Honduras and El Salvador.

Most Central Americans know very well how dangerous it is to make it to the United States. They know about the so-called "death train" through Mexico, the routine assaults and kidnappings of migrants, the rape statistics among women and girls in transit, the harrowing journey through the desert. But faced with the choice of allowing their children to attempt the journey, parents don't have too many options. They are terrified of the gangs' predatory tactics at home. It is a heartbreaking choice for parents.

These unaccompanied children urgently need protection. As a Church and as a nation, we must protect children in their home communities, in the United States and in transit. Such a solution requires a regional approach to the problem. It also requires us to address both the short-term humanitarian needs of these children and the longer-term problems which spur flight.

CRS and the Church operate on the principles of Catholic Social Teaching—that all people have a right to migrate for their needs but also the right not to migrate and to meet their needs where they are.

CRS works with the Catholic Church and civil society partners to uphold the rights of migrants across the region through humanitarian assistance, education and advocacy.

CRS' mission directly addresses the economic push factors that are one impetus to leave, including the lack of jobs, education and violence.

In response to high youth unemployment and mounting violence in Central America and the Caribbean, Catholic Relief Services has implemented innovative programs for young people at risk that range from reducing child labor and helping street children go to school to working with young people in some of the toughest neighborhoods in Central America.

The ultimate goal of our agriculture programming in the region is to help vulnerable families increase production and develop more resilient livelihoods so that they are not pressed to migrate to cities or to the United States.

We in the United States should do all we can to protect unaccompanied children and help them find the safest home. We should provide adequate funding to support them in their time of need, including addressing the needs of children who arrive in the U.S. with social and legal services protection. Unprotected, these children are vulnerable to trafficking, kidnapping, extortion and other abuses. Children who are repatriated from the United States also require particular protection.

The United States should also work with the affected communities to help prevent violence and support youth workforce development programs, and strengthen families through the "Strong Families Program" in Central America to reduce the likelihood of young people joining gangs and develop economic alternatives, like agriculture programs that link farmers to markets.

A delegation from the United States Conference of Catholic Bishops traveled to Honduras, El Salvador and Guatemala in November 2013 and articulated the various factors compelling children to migrate in their report, "Mission to Central American, the Flight of Unaccompanied Children to the United States."