Tuition for Refugees in Egypt

Egypt is home to an estimated 248,000 refugees and asylum seekers. They come from several countries in the region, including Sudan, South Sudan, Syria, Iraq, Yemen, Somalia, Eritrea and Ethiopia. While they have had legal access to universities in Egypt, most cannot afford the tuition.

With funding from the U.N. High Commission for Refugees, Ford Foundation and private donations, Catholic Relief Services offers college scholarships to refugees so they can continue their education. The program encourages the development of qualified people who can contribute to the future of their countries once they return home, and those who can contribute to their host countries. The program aims to support a peaceful local integration and greater peace and stability in the region.

Here are the stories of some of those scholarship recipients and what they hope to achieve once they graduate.

Pharmacy was not exactly Rama Gamal Eddin’s first choice of study when she entered college. She really wanted to be a doctor, but her scores were not quite high enough for medical school. 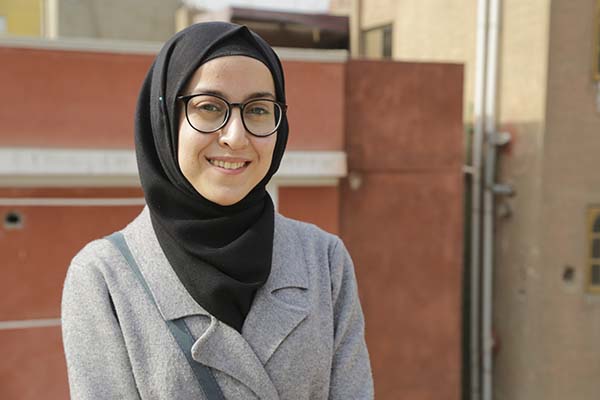 “My first year I did not like the pharmacy curricula,” Rama says. “Now that I’m in my third year, I’ve taken subjects related to clinical studies so this made me like the major more.”

Now in her third year, Rama, a refugee from Syria, has received a scholarship from CRS to attend college for the past three years. She is particularly interested in oncology and community service.

“I like oncology because I want to make a difference in people’s lives,” Rama says. “I like to work with people.”

Rama fled her home in Damascus soon after the civil war started because it became too dangerous. When bombs started falling near where her brother was living, her family decided it was time to leave, ultimately settling in Cairo. Eventually she would like to earn a master’s degree or her doctorate, and then go back to Syria.

“I feel like I belong there,” Rama says. “I want to go back and support the progress of the country.”

Her dream is to be the founder of an oncology hospital in Syria.

“At the end of the day, refugees are human beings and are capable of doing things that other people can do,” Rama says. “Even if they are burdened with a lot of things, they can do a lot.”

Things went bad quickly for Abdullah Kabbani at the start of the Syrian civil war. His home in Aleppo was destroyed in 2011, and his family spent a year trying to find a safe place to stay. His uncle, a trader, was leaving the country so they decided to join him and travel to Egypt. 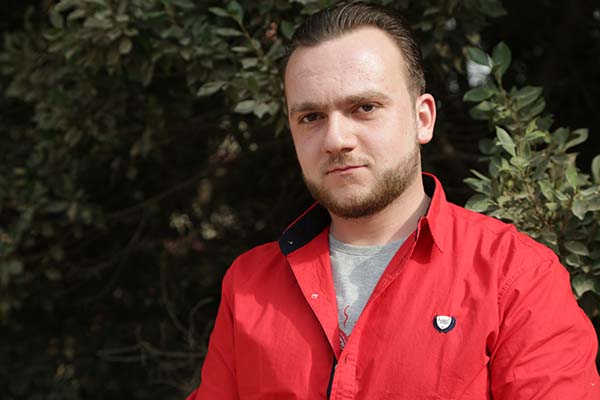 “We didn’t know this country we were coming to,” Abdullah says. “All my relatives [outside Syria] are in Libya and we thought of Egypt as a first stop. We thought maybe it would be better, so we stayed here. Fate was playing its game.”

Abdullah was working for his uncle and wasn’t looking for a scholarship until he saw the CRS scholarship application on Facebook. He thought he would give it a shot and was accepted into the program.

“I needed the scholarship very much,” Abdullah says. “It helped in my studying and development.”

Abdullah is now a junior studying English literature at the Higher Institute of Languages in Cairo. He started learning English when he was just five and cannot imagine studying anything else.

“I like drama and poetry, which is kind of complicated sometimes,” Abdullah says, laughing.

But those complications also help him learn the nuances of the language, which for him is a critical skill. Abdullah wants to pursue a master’s degree in linguistics and become a translator.

For now, he plans to stay in Egypt.

“The word ‘refugee,’ I don’t know the exact definition of it,” Abdullah says. “But let’s say it’s a person. It’s a real person like anyone else. He left his home because of the destruction or he couldn’t find a way to work or live. But when he found another country, another home to live in, he must be treated as a normal person.”

Maria Halimeh, a 21-year-old Syrian pharmacy student living in Cairo, has big plans for her future. 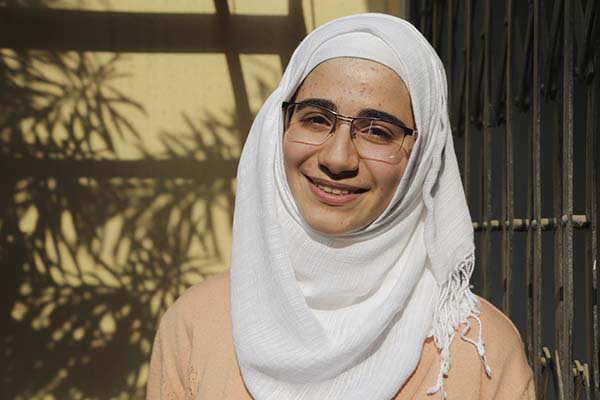 That’s just for the short-term. Eventually she wants to be a member of a world health organization and do clinical studies in nutrition.

And that’s not all. Maria is always working on improving her English speaking and writing skills. She also likes to draw and is currently working on learning Photoshop and graphic design. Maria says everything with a laugh and a smile, but things have not always been easy for her. When she was 14, she left her home near Damascus because it was no longer safe.

“My house wasn’t destroyed but the area was full of danger,” Maria says. “We went to another village and then we passed through Lebanon and then went to Cairo.”

While in Cairo, Maria suffered from depression and developed an eating disorder. She is doing much better now, in part because the scholarship she received through CRS made college possible for her.

“My family couldn’t afford all the fees for the university,” Maria says. “And for another reason, me, as a girl, I don’t have the ability to work. I don’t have any experience in anything. But maybe now I can work. For me, the scholarship was a big chance.”

A chance she does not plan to waste.

“I have a lot of hopes and passions,” Maria says. “I want to spread that passion to the world through all the things that I learn.”

For most of his life, Khaled Hassan Abdulaziz lived in a camp for displaced people in his home country of Sudan. He says the first time he ran away to a camp was to escape violence.

“The only reason I survived was that when I was a very young my mother dressed me in girls’ clothing. They thought I was a girl.”

With help from non-profit organizations, Khaled was able to attend school while living in the camp, where he learned the importance of education. He was accepted to a university in Khartoum, but student protests led to suspensions and he was unable to continue with his studies.

“I wondered why there are two types of people—people who were fighting each other and then other people who come from across the world to help others,” Khaled says.

That question inspired Khaled to study economics, which is his major at October 6 University in Cairo. Khaled moved to Egypt in 2016 so he could continue his education.

“There is no meaning in life without it,” Khaled says.

Khaled was accepted to universities in Cairo but could not afford the tuition. When Khaled received the scholarship from CRS, it was a new beginning for him.

“Once I was accepted, I knew my role would not stop here,” Khaled says. “I should not just be benefitting from the scholarship, I should benefit other people.”

Khaled started a community center in Cairo to give back and hopes one day to return to Sudan and serve the people of his country.

College didn’t seem like a viable option for Mustafa Zidan, a Syrian refugee living in Cairo. He came to Egypt in his first year of high school and had to work, so his grades suffered. Adjusting to life in a new country was also challenging. 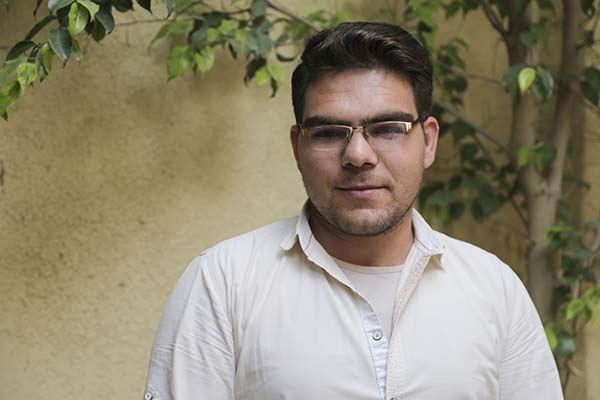 “It was both a good and bad experience,” Mustafa says. “In the beginning it was like starting from scratch. It was a different culture, it was a different dialect and it wasn’t like living at home.”

Because of the work he had to do when he arrived, he missed a year of school. Still, when CRS offered him a scholarship, he decided to go for it. His father works in trade, so he thought accounting would be a good major.

With opportunity to focus on his schoolwork, he hopes to pursue a master’s degree and eventually a doctorate in management. His aspirations include working with a United Nations agency in accounting or on a management team, and when he goes back to Syria, he wants to work at a bank.

“This will be my way to prove that a refugee can do whatever he wants,” Mustafa says. “He’s participating in the community. He’s taking part in a great job.”

August recess is a key moment to meet with your members of Congress while they are out of session... END_OF_DOCUMENT_TOKEN_TO_BE_REPLACED

Watch videos on the issues of hunger and climate change here. END_OF_DOCUMENT_TOKEN_TO_BE_REPLACED