Rather than using Mexico as a path to the United States, Central Americans are increasingly making Mexico their destination, says the director of a Josephine shelter in Mexico City. 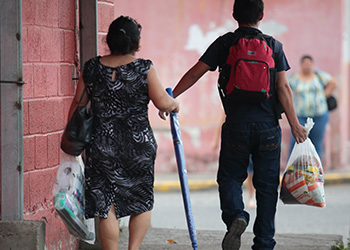 Migrants carry basic supplies offered by a care center in Honduras. Increasing desperation has led many people and children to flee their homelands. Photo by Oscar Leiva/Silverlight for CRS.
“Today nearly 60% of the migrants we receive at our shelter stay in Mexico, especially women and children,” says Sister Maria Magdalena Silva, director of CAFEMIN, a Josephine shelter founded in 2012 in Mexico City.

She says migrants now find it more difficult to enter the United States and more dangerous to return to their own countries.

The plight of immigrants and their human rights will be a central theme of Pope Francis’ visit to Mexico February 12 to 17.

Economic inequality, corruption and gang violence have worsened in recent years in Honduras, Guatemala and El Salvador, says Father Arturo González, of the Mexican Jesuit Service. He says that young people suffer from social exclusion, including the lack of employment opportunities, and that many are threatened by gangs’ “join-or-die” policies.

Sister Silva says tightening U.S. immigration policy and fear of violence in their own countries have made many migrants choose to settle in Mexico, so the need for help is increasing. CAFEMIN expected to accommodate about 20 women and children when the shelter opened, but they have received about 60 Central American migrants.

In addition to providing food and shelter for up to 3 months, CAFEMIN helps migrants with education for children and medical services. Those seeking refugee visas are directed to advisors and offered job skills workshops. 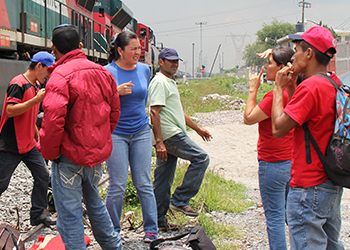 Migrants gather near a train often used as transportation through Mexico. Photo by Christian Melendez Lopez/CRS
To tackle the root causes of migration in Central America, Catholic Relief Services offers education and work programs, like Youth Builders, aimed at ending violence and providing employment opportunities, and Food for Education, which provides school lunches and encouragement to students. CRS also works with farmers to mitigate damage caused by climate change.

Father González says that 79% of the 31,894 migrants the service helped through 14 shelters in 2014 were 18 to 40 years old. Violence in their home countries compels many to leave. Others want to reunite with family members in the United States who have emigrated.  “It is important that the U.S. Congress approve a reform to regularize immigrants in the United States and that Mexico does something similar with Central American migrants established in Mexico,” Father González says.

Bishops hope for protection of migrants

The Catholic bishops of the border states of Mexico and the United States hope that Pope Francis´ upcoming visit to Mexico will encourage authorities in both countries to pass legislation in favor of migrants.

Bishop Alonso Garza Treviño, of the border Diocese of Piedras Negras, Coahuila, Mexico, says that some parishes and institutions in the United States wish to help but fear breaking the law.

“They are our brothers who should be supported to achieve a better livelihood for their families and so Catholics can fulfill their human and Christian duty to help the needy,” he says.

Cecilia Suárez, head of office for CRS Mexico says the agency supports Central American migrants in transit through Mexico and agricultural workers who leave their homelands in search of jobs.

She says CRS Mexico promotes political and social advocacy to improve working conditions for farm laborers in Mexico and the U.S.

August recess is a key moment to meet with your members of Congress while they are out of session... END_OF_DOCUMENT_TOKEN_TO_BE_REPLACED

Watch videos on the issues of hunger and climate change here. END_OF_DOCUMENT_TOKEN_TO_BE_REPLACED