When an acquaintance turned up at his house with a little cash and a job offer, Antonio Jose dos Santos Filho thought he'd finally caught a break.

Unemployed and barely getting by at the time, Antonio accepted the offer to clear land for cattle pasture in the Amazon and took the 2-day bus ride to the state of Pará in northeastern Brazil. 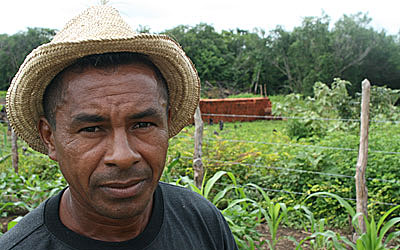 After a few days sleeping under a tarp, drinking the same water the cattle drank, and working 11 hour days with few breaks under armed guard, Antonio realized he was in trouble. And when payday came and his bosses told him his salary was docked because he'd "purchased" items at the company store, he realized he was enslaved.

"The guard would threaten us, telling us that 'we didn't bring you here to play or rest, we brought you here to work,' " says Antonio. "I was scared."

Brazil was the last country in the Americas to abolish slavery when it did so in 1888. But each year, an estimated 10,000 Brazilians fall prey to its insidious modern manifestation. No longer is it the buying and selling of human beings as it was for centuries. Instead, a recruiter is paid to lure workers from the impoverished northeast to work on ranches in the Amazon's vast agricultural frontier or on sugar cane farms in central and southern Brazil. Far from their families and out of reach of official inspectors, workers are trapped. They labor to pay off a never-ending "debt" for their food, travel and accommodations.

Slavery's links to goods we buy

"There are three things that sustain slave labor in Brazil," says Rogenir Almeida Santos Costa, head of Catholic Relief Services programs in Brazil. "First, a dramatic concentration of wealth [among relatively few] means too many Brazilians are poor, landless and vulnerable. While many employers protect workers' rights, others exploit poor workers to maximize their own profits. And few of those who are caught practicing slave labor are ever punished." 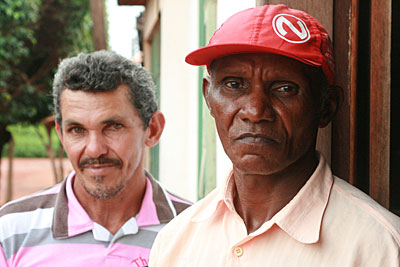 Former slaves Manuel Alves da Costa and Bento Pereira da Silva stand outside the CRS-supported Center for the Defense of Life and Human Rights of Açailândia in Brazil. Photo by Robyn Fieser/CRS

Brazil's slave labor has strong links to the United States through two major Brazilian industries: charcoal, a basic ingredient in the manufacture of pig iron, which is turned into steel; and agriculture. Laborers clear land for grazing and crop cultivation, including sugarcane, which produces the ethanol that has brought Brazil such a high level of fuel self-sufficiency.

The steel makes its way into numerous products, such as automobiles, refrigerators and air conditioners. And, as the world's top sugar producer, Brazil exports 30 million tons of it per year. The country is also one of the world's leading producers of the sugar-based ethanol for biofuel.

The Brazilian government has made strides in confronting the issue. It formed an inspection service to investigate reported abuses, supports mobile units to rescue workers and publishes a "dirty list" of businesses using slave labor.

'An act of justice'

Because they are located in isolated areas in the Amazon and on private ranches, workers have little access to government agencies or organizations that can assist them in advocating for better working conditions. The Church and civil society partners CRS supports are often the only sources of help for workers.

"Our partners have built up trust over the years in the communities where they work and have become hubs in the region for human rights, bringing workers access to justice," says Rogenir.

On a recent afternoon, Bento Pereira da Silva and Manuel Alves da Costa arrived at the Center for the Defense of Life and Human Rights of Açailândia. A town of about 100,000 people in the northern state of Maranhão, Açailândia is well known as a recruiting ground for slave labor.

The two men were among a group of 15 people, including three minors and one woman, who were rescued more than 2 years ago by a government inspection team. The crew had worked for stretches as long as 18 days picking, stripping and removing kernels from corn on a farm.

After dozens of legal proceedings facilitated by lawyers at the center and what seemed like endless red tape, Bento and Manuel each received about $2,400—the first of four payments in that amount—they won in court for pain and suffering.

Barely able to contain his smile as he counted the bills and placed them into a sealable plastic bag, Bento said, "At least after everything that has happened, I get this—an act of justice."

For Brigida Rocha, a social worker who greets scores of ragged, hungry workers who find their way to the center, sometimes bearing signs of torture, the 2 years it took to settle Bento and Manuel's case is itself a small victory. 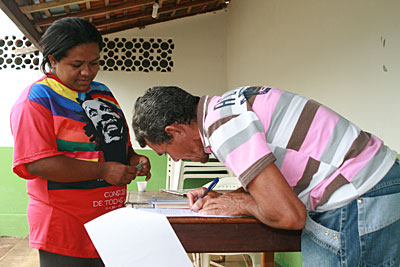 "These processes can take up to 10 years because the landowner can delay the process," she says. "In this case, the landowner settled. It shows how important it is for us to stand by the workers through the entire process to show them it is worth fighting for their rights."

Organizations such as the Center for the Defense of Life and Human Rights of Açailândia are not only advocates for workers' rights and legal representatives for former workers, they are also watchdogs for government inspectors, pointing them to alleged cases of abuse.

When they receive complaints from workers, the organizations relay that information to inspectors, who, under Brazilian law, are authorized to raid the farms or ranches. Last year, the center in Açailândia was responsible for 10 inspections and rescues.

Rescued workers, though, face the same destitute living and working conditions that led them to pursue risky job opportunities in the first place. To remedy this, CRS partners help workers organize to apply to the government for restitution under labor laws and help them create jobs through cooperatives.

In Açailândia, for example, former slave laborers and their families are learning to manufacture wooden furniture and decorative items for sale. Another group is producing charcoal bricks for barbeques using the waste from local pig iron manufacturers. The projects teach valuable skills and provide some income, but they operate on a small scale and currently reach limited markets.

Farther south in the state of Piauí, Antonio is starting over. After a 5-year legal battle, he and 41 other families made up of former slaves and migrant workers won land from the Brazilian government.

At 45, he is building his first house and has a decent-sized plot of land on which to grow manioc and rice.

He has vowed to never migrate again in search of work.

We seek daily renewal from the source of all life, and so we pray ... END_OF_DOCUMENT_TOKEN_TO_BE_REPLACED

Our walk with God is reflected in our walk with others, and so we pray ... END_OF_DOCUMENT_TOKEN_TO_BE_REPLACED