Through the Lens of Our Photographers 2016

Photo by Ismail Ferdous for CRS

“A picture is worth a thousand words.”

Good photos create an immediacy and intimacy that often goes beyond words. Photos build connections and relationships. They draw out emotion and draw in people to situations that may be foreign to them. Photography is an expression of both self and others.

Our team of photographers takes thousands of pictures each year in every corner of the globe. But there's always a story behind the photo. In this collection, we decided to take you behind the lens, and asked our photographers to share those stories. 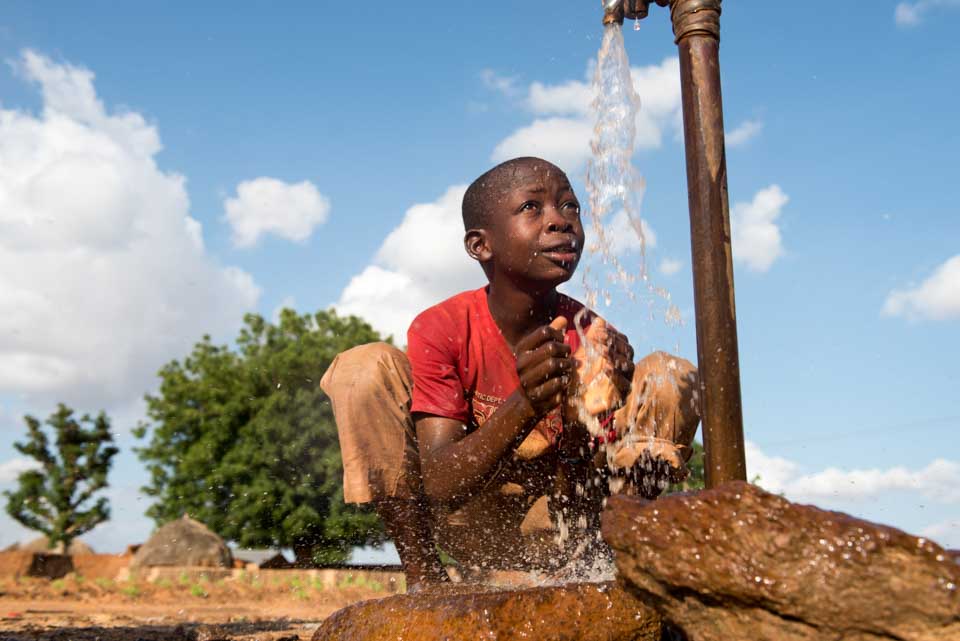 “This was really a chance photo.  It was the end of a long day, traveling around northeast Nigeria. At some point during my trip, I ate something that didn’t sit well, and CRS staff members were increasingly concerned that I had a case of food poisoning. In two and a half years, I’ve taken almost 30 international trips with CRS. You would think I built up ‘immunities’ during this time, but I get sick pretty often.

The next stop was supposed to be my hotel, but then we passed by a farm–it was beautiful–and there was a CRS sign right in front. The staff told me we helped rehabilitate the water pump, and the community was using it for drinking water and irrigation.

We decided to stop for a few minutes. I got out of the car, tried to climb the water tower to get a bird’s eye view, but around halfway up, I was dizzy and realized it was a terrible idea. While everyone else was discussing the project with community leaders, I sat down next to the water pump to take a break.

That’s when and how I met the boy in this picture. As he washed his hands, I leaned back and snapped the photo.” 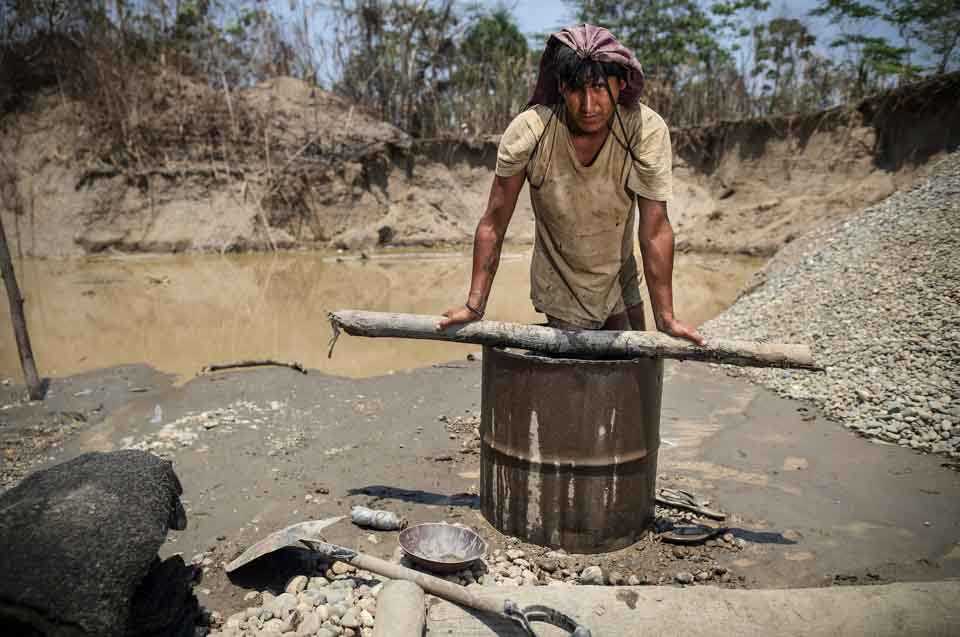 “We traveled by boat about an hour on the Madre de Dios River in Peru to get to a gold mining concession, where we would be able to take photographs and talk to the actual miners at work. There are some mining zones in the Tambopata Reserve where you can't even dream of entering because there are armed illegal miners there.

We met Milo, who can make up to $25 a day working in harsh conditions under a cruel sun. He told me he started mining because there were no other activities that could bring him this amount of money. But Milo puts his health at risk. In this picture, he is standing in mercury as he tries to separate the gold out from other materials.” 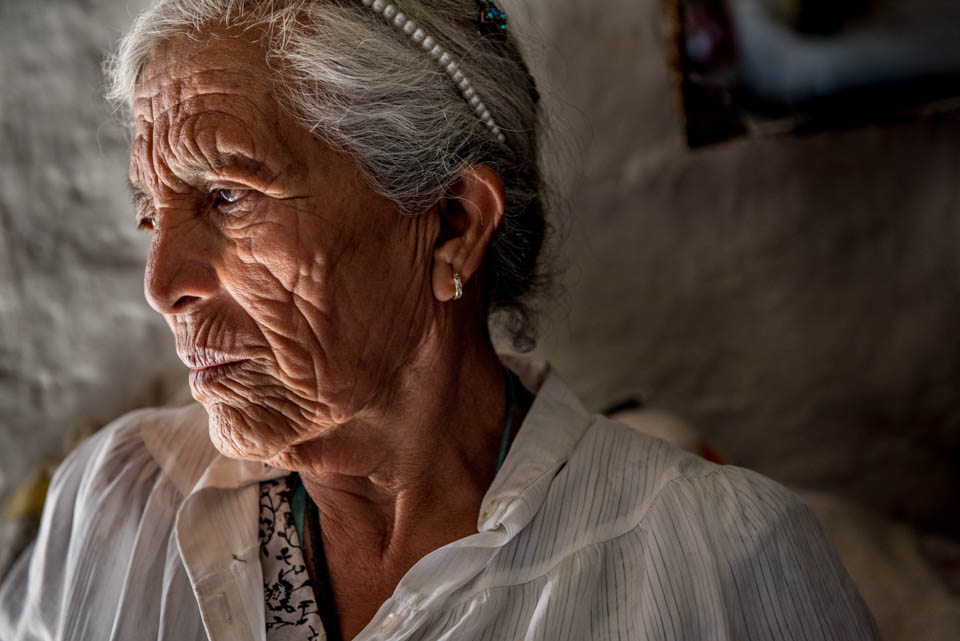 “Ejido Hidalgo, a small Mexican village populated with women, children and fewer men, sits in the middle of a large desert region. The land there is unforgiving and water is a critical resource. Jobs are scarce; many of the younger adults have crossed over to the United States for work. I was there to photograph a small women’s cooperative whose members were hoping they could develop a cactus business.

Basilica Lugo Martinez, 75, works as the social leader of the cactus co-op. Her face wears the deep grooves of grief and toiling under an unforgiving sun. She lost 5 of her 12 children.  A middle son was murdered, at age 30, in Houston, Texas. She says there was no investigation because her son was illegal and police just assumed it was drug related; it wasn’t. Basilica says an American citizen had killed him. His employer, a building contractor, paid to have his body shipped back home.

Basilica's face lit up only once—when she talked about the goals the women in the cooperative wanted to achieve. She said, with a smile, that they would all become businesswomen and the cactus venture was only the first of many others they want to do.” 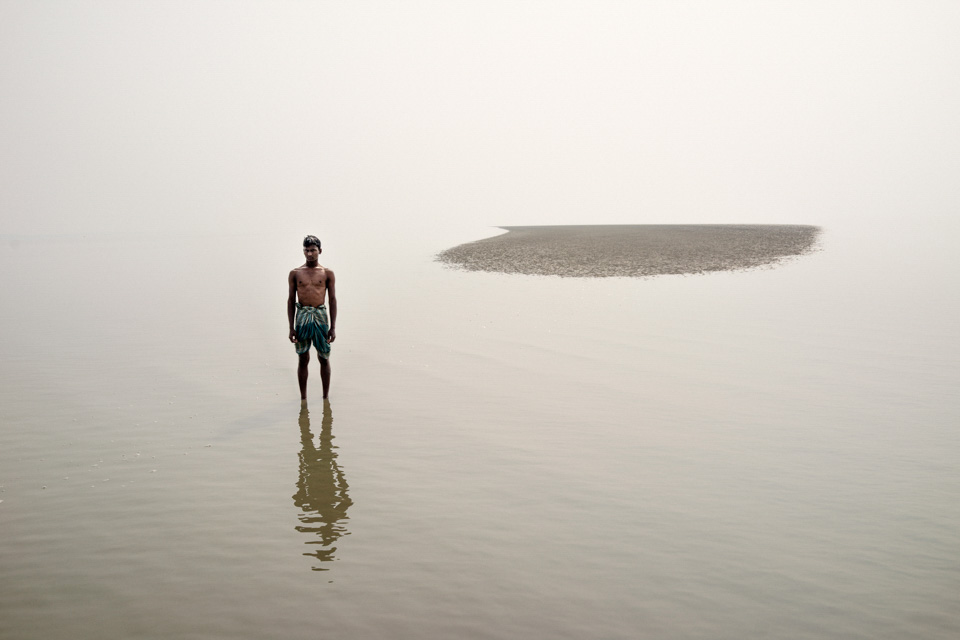 “I went on a boat with a bunch of fishermen to film how they catch fish. Most of them were very young. They usually go to the estuary of the river where the river meets the sea because they have a better chance to catch more fish. But those places are the most dangerous. Most of the boats sink because of the tide.

While I was going there, I had a talk with them. The young guy in the photo was about 19. In May 2013, during Cyclone Mahasen, he was washed by the big wave and found himself on the shore of an island after 14 hours of floating in the river. He says cyclones are more these days and weather is unpredictable. He also says he has no other choice but to continue working as a fisherman.” 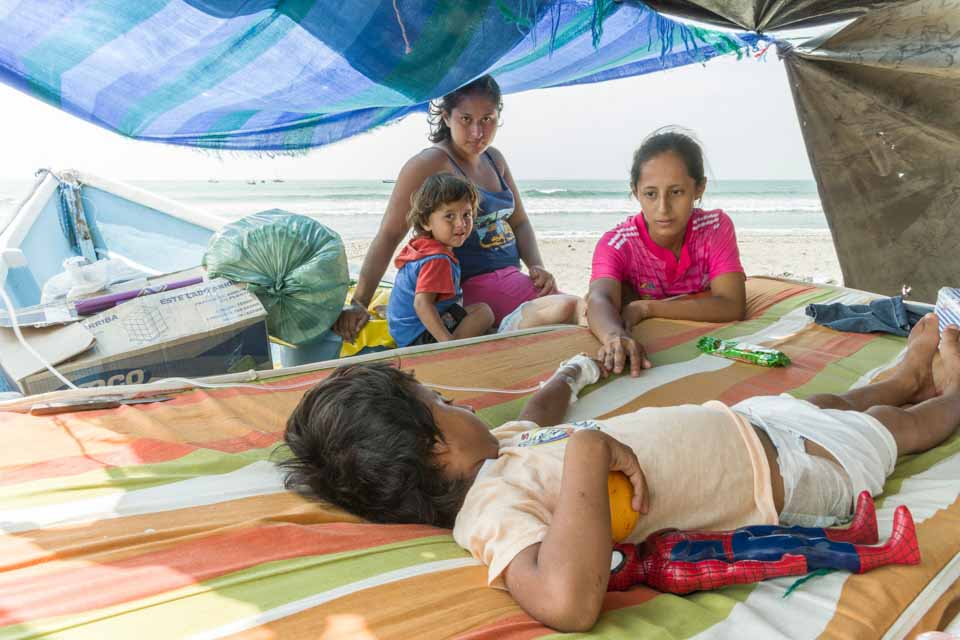 “Just three days after the April 16 earthquake on the Ecuadorian coast, we arrived at a small town called 'La Chorrera.' Along the beach, the fishing boats were improvised as shelters. They were precarious and battered, the equatorial sun attacking with all its force. I passed boat by boat, trying to understand how the people can live in makeshift boathouse remains. I cannot erase from my mind the image of little 4-year-old David. He was crying, frightened and even hurt after being rescued from the rubble of his home. Between crying and pain, I see the certainty of hope of a new beginning in the eyes of his 19-year-old mother, Nancy.” 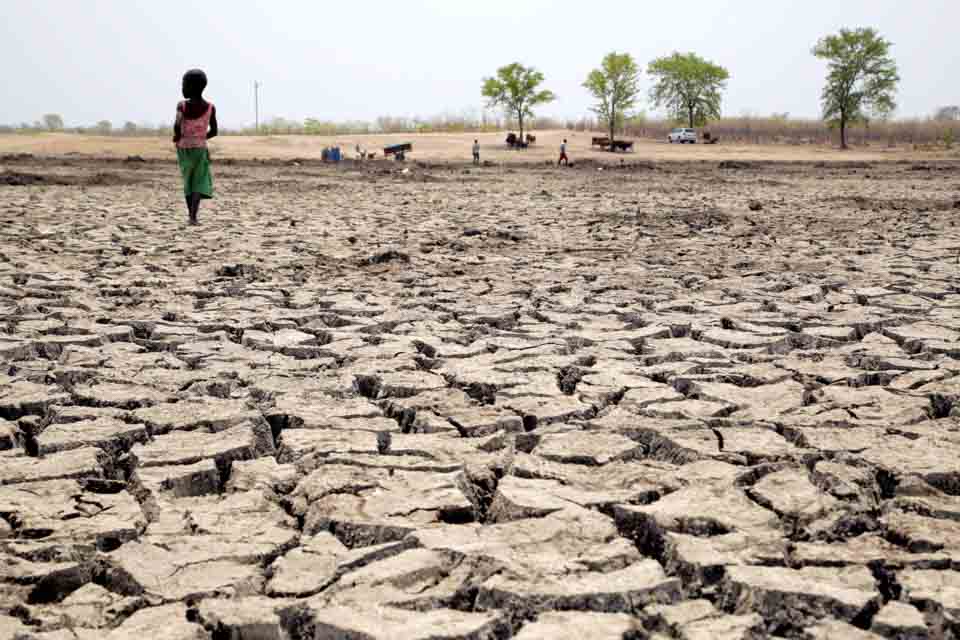 “People were gathering here because there was almost no other place to get water. The next best option was a day's travel away. A woman who was digging meters down for water said to me, ‘Please let people know about what is happening here.’ I saw this girl just afterward walking across the cracked mud, in the distance, a shock of color in an otherwise lifeless landscape, and I wanted to show that story. People were bringing their animals too, but little was left to drink. Now, a year later, there is still no rain in parts of Zimbabwe.” 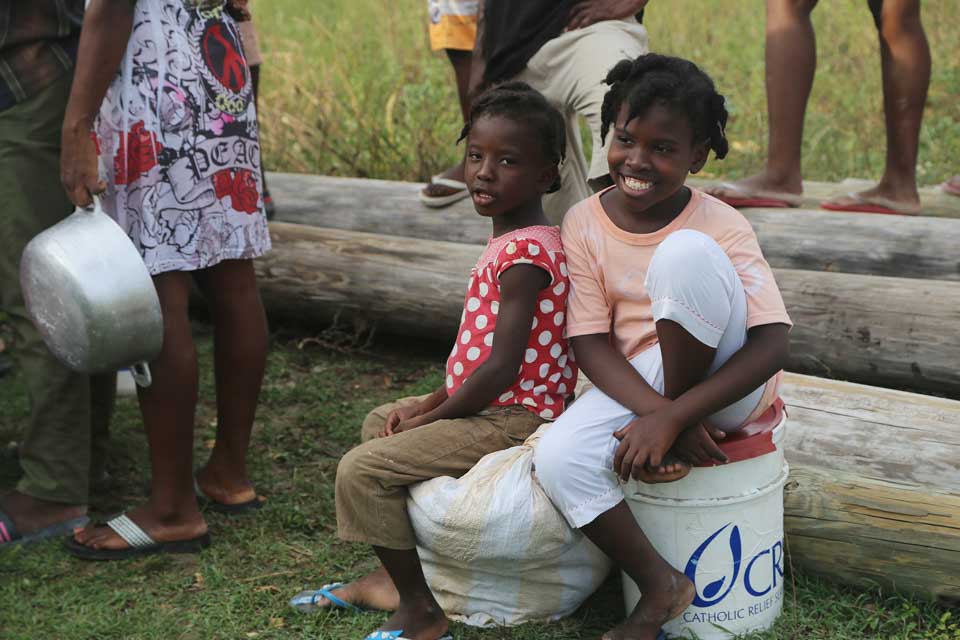 “I first met these two little girls when I was driving up the coast of Haiti’s southern peninsula to see the aftermath of Hurricane Matthew, a category five hurricane that hit the island country on October 4. The girls and their mom withstood much of the storm huddled together in their concrete, two-room house, but once walls started caving in, they ran for shelter at a neighbor’s house up the road. When I met them a few days after the hurricane, they were still stunned by just how quickly the storm had taken everything—their house, their livestock, the trees around them. The girls took me on a tour of their community. Pulling me by my hand, they took me through what was left of their market and showed me a neighbor’s donkey floating in a flooded ditch.

A few days later, I was back in their community, taking photos of a CRS distribution. We were bringing food and hygiene kits (soap, towels and the like) to families who had been waiting for days for help. The girls found me first. Clutching their buckets full of supplies, they quietly grabbed my hand again, looked up at me and smiled. Then they went to play, like little girls do. I was glad to see them and their mom. I was even more glad to see them playing.” 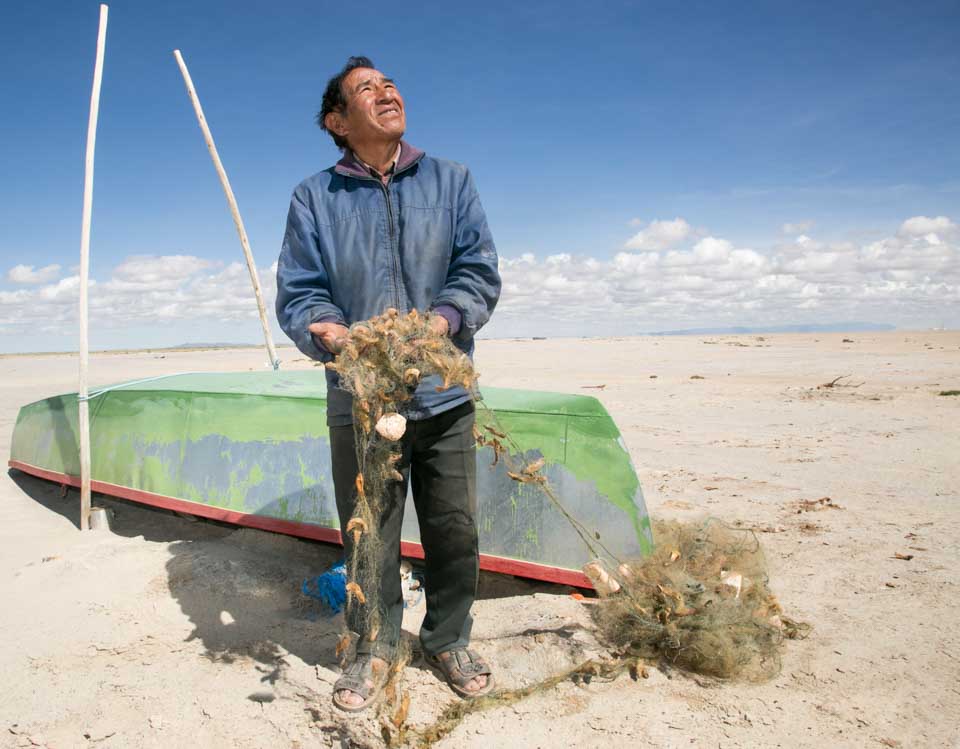 “We had been driving over what looked like desert flats for close to 10 minutes. We followed a group of local fishermen or we would have been totally lost, as the terrain all looked the same.

We arrived at a group of boats in the middle of the new desert, the former lakebed of Lake Poopó. Bolivia's second largest lake had fallen victim to rising global temperatures and mining. Where we arrived had–up until just a few years ago–been under several meters of water.

Benito Aima, 67, pulled his nets out from under his boat and held them so we could see small dead fish which festooned the net like morbid decorations. He was friendly and answered all of our questions, but he was also weary. He said that we were not the first group of climate change investigators to come and ask him about his misfortune. He wanted to know why he was just being asked questions, and why, with all of this evidence, was the world so slow to help him and the thousands of other families who had lost their livelihoods. It was sobering.” 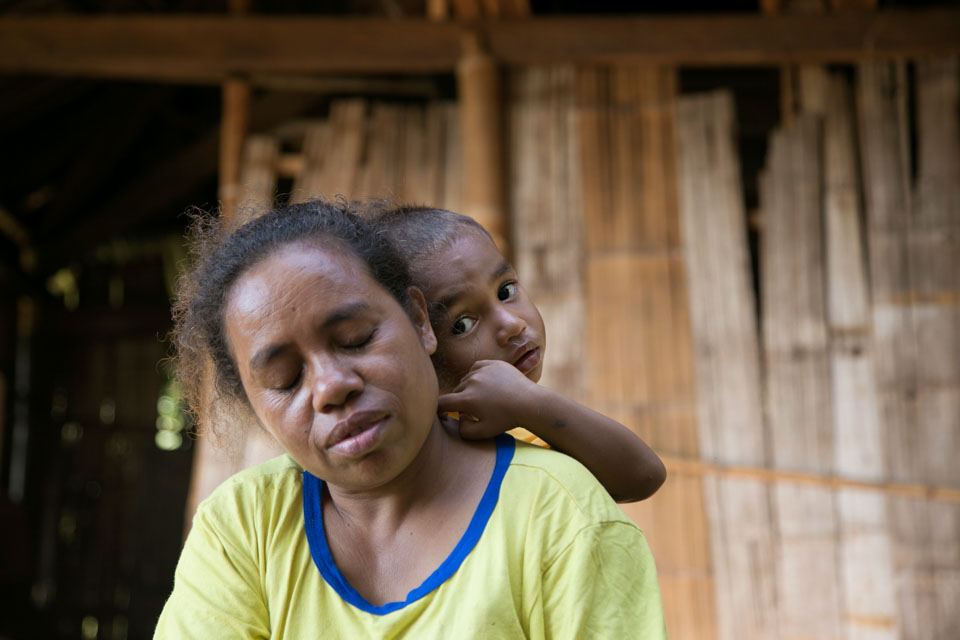 “Being a mother is happy, but sometimes I am tired. I have 6 children. They are my legacy, the only thing I will leave in this world, but on some days, I lose my patience. I always apologize, and I work to give them a good future. But yes, being a mother–it is all I can think about in my day. My heart is full, sometimes with happy, sometimes with worry. Isn’t that what it is to be a mother?”  – Agostinha Dionisia da Costa

“I visited Agostinha Dionisia da Costa in Baguia, Timor-Leste. She leads a small caregiver’s group that helps pregnant women and people who care for small children understand good nutrition, as well as helping them grow nutrient-rich vegetables to eat with the staples of rice, cassava, maize and taro.

She is more than her work, though. She is brutally honest and laughs with a guffaw before hiding it behind her hand. She speaks frankly about her struggles and what makes her feel hope. She shares her experience with miscarriage to communicate the importance of good nutrition to younger women. She loves her family and her neighbors. She struggles to cook beans so they are soft but not overcooked.

I have dozens of “typical” NGO photos of Agostinha where she is smiling and active and leading a group discussion. This one is my favorite, though, because it shows the hard things that are so easily hidden when putting on a good face for a guest. Being a mom is full of both joy and aching tiredness. I’m honored Agostinha was willing to share both sides of her journey. Spending a day with her made me want to give all of my friends with young children a big high five.”

CONNECT WITH CRS ON SOCIAL MEDIA

We seek daily renewal from the source of all life, and so we pray ... END_OF_DOCUMENT_TOKEN_TO_BE_REPLACED

Our walk with God is reflected in our walk with others, and so we pray ... END_OF_DOCUMENT_TOKEN_TO_BE_REPLACED