Thriving with Savings Groups in Guinea-Bissau

The women sitting under the large tree in the town of Xitole, in the Bafatá region of Guinea-Bissau, form a circle, with a blue metal box on a table in the middle. One by one they raise their hands when called upon, then slowly under the afternoon sun they get up to hand a few coins over to another woman sitting in front of a blue and green plastic bowl. Eventually the money will make it to the metal box, and then back into the hands of the women. 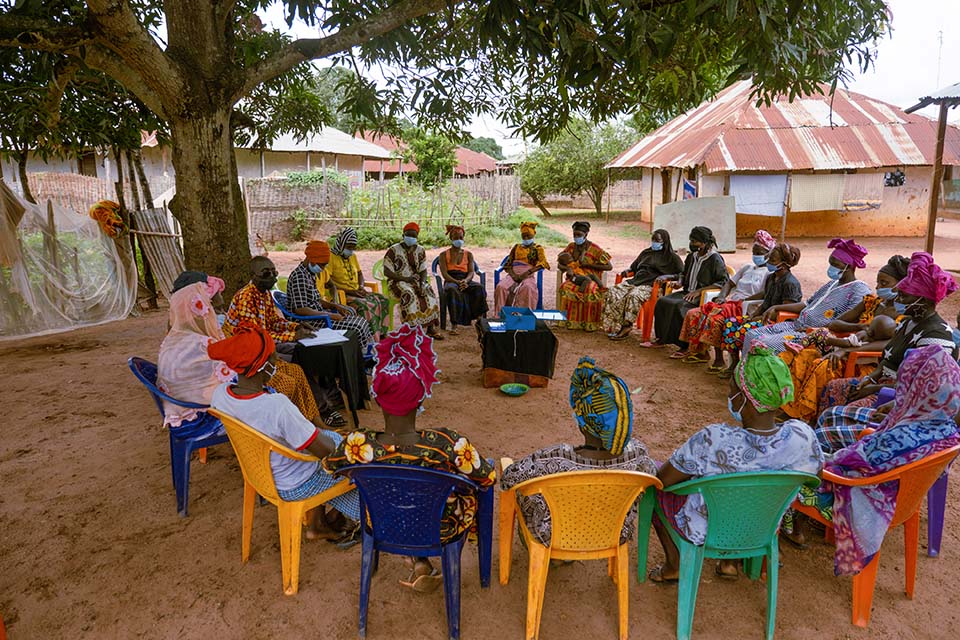 A CRS-supported savings group meets in Guinea-Bissau as part of a community-based micro-savings strategy that allows vulnerable populations in Guinea-Bissau to gain financial support for income generating activities.

Since 2021, nearly 30 women in this small town in West Africa have participated in the Savings and Internal Lending Communities, or SILC, program promoted by Catholic Relief Services and Caritas Guinea-Bissau. It’s part of the McGovern-Dole Food for Education project supported by the U.S. Department of Agriculture.

“In the beginning, we faced some challenges, because not everyone understood how the program worked,” says Fatoumata Balde, a mother of eight who sells the produce she grows.

Balde says that since the beginning of the program, she and her neighbors have seen a substantial benefit. 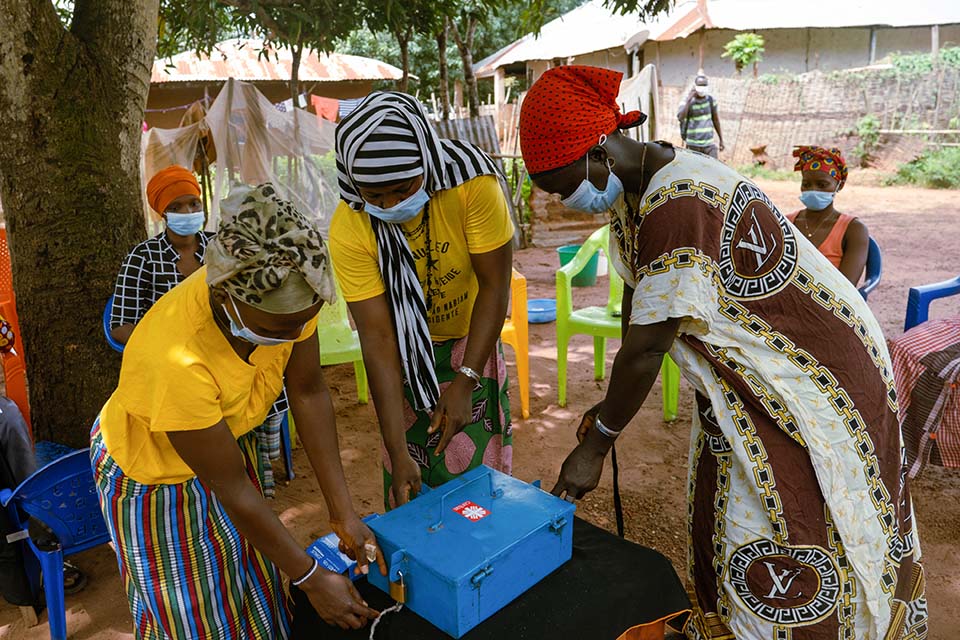 Women secure a box holding funds from their community-based savings group that allows rural and underserved populations in Guinea-Bissau to gain access to financial support.

“After the boxes arrived, we received some training and how to use it in the community. Now we are able to save a lot more money that can help us with certain activities,” she says.

The SILC methodology is about a community-managed, savings-led microfinance approach that aims to provide a safe space for households to save, borrow and increase their incomes. The goal is to help members better manage their existing resources by teaching them basic financial management skills. 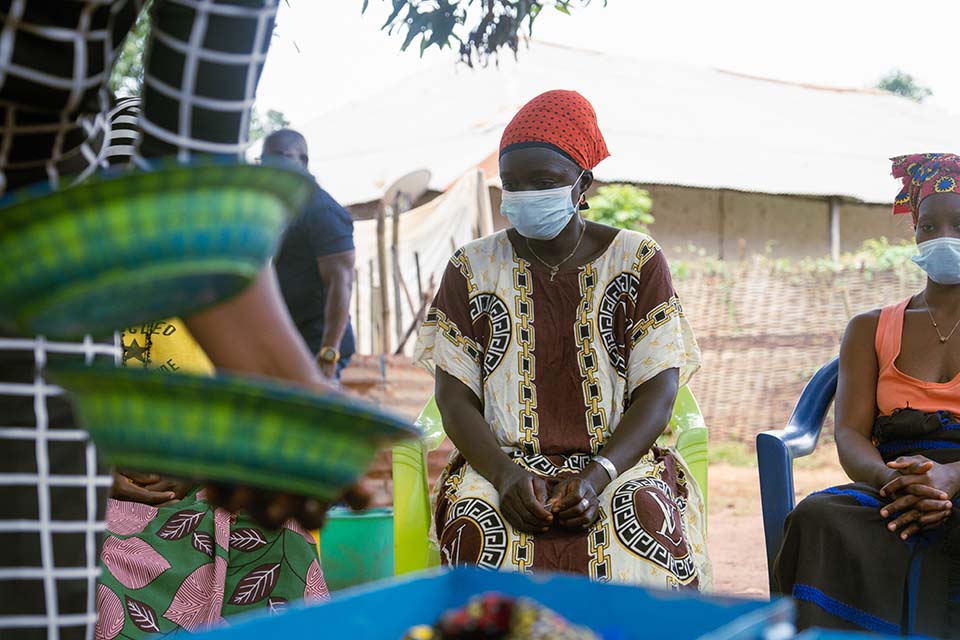 Women in a CRS-supported SILC program in Guinea-Bissau collect funds for their pooled savings.

By facilitating savings services, CRS enables vulnerable communities to build up useful lump sums without incurring excessive debt or interest charges. Moreover, the SILC strategy helps protect members’ limited resources by shifting their money from unsafe, informal locations—like under their mattresses—to investments in individual or group members’ businesses. This provides a positive return on their savings.

The accumulation of savings and the ability to access flexible credit through an internal lending mechanism enables investments in things like farms or small businesses. This leads to greater financial resilience among participating members.

In Xitole, members gather together weekly to contribute their savings, which is combined with the group’s and recorded in detail in their ledger to ensure accountability.

With their pooled money, women who would like to borrow to strengthen their businesses can do so with community oversight. 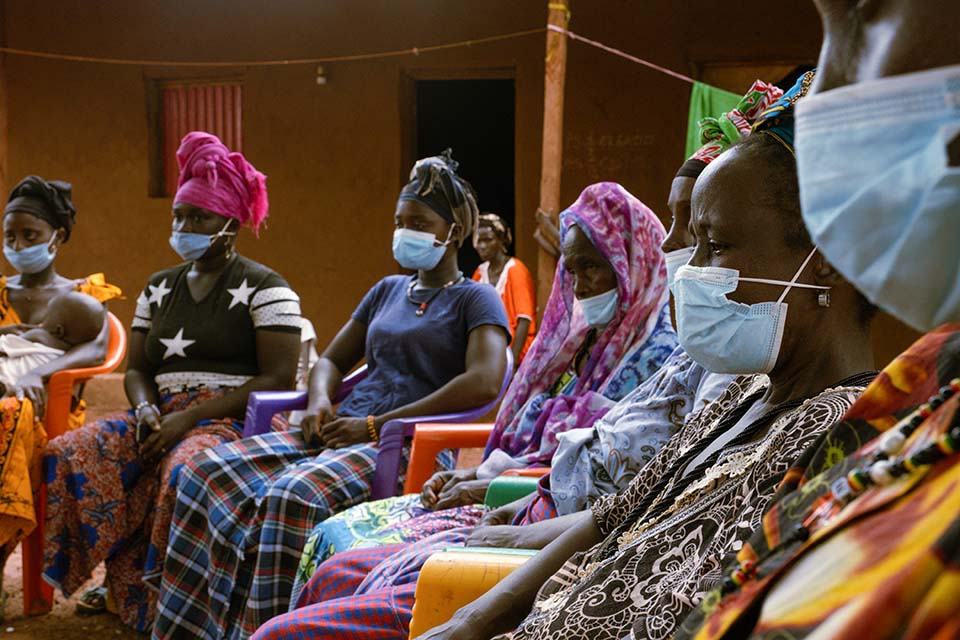 The first time Balde used the program, she bought more vegetables to sell at her market stand in order to increase her income.

“The savings activity has helped us elevate our work,” she says. “We try to increase our income.”

Balde wakes up at 5 a.m. every day to clean her house and cook breakfast for her children before shuttling them off to school. She then works either in cashew fields, making palm oil, or selling her wares at the market, depending on the time of year.

Despite her hard work, before SILC she often found it difficult to pay the bills for school supplies when the academic year began.

Now, with her increased income from borrowing and expanding her business, she is able to buy shoes, clothes, notebooks and more for all of her children as the school year opens. 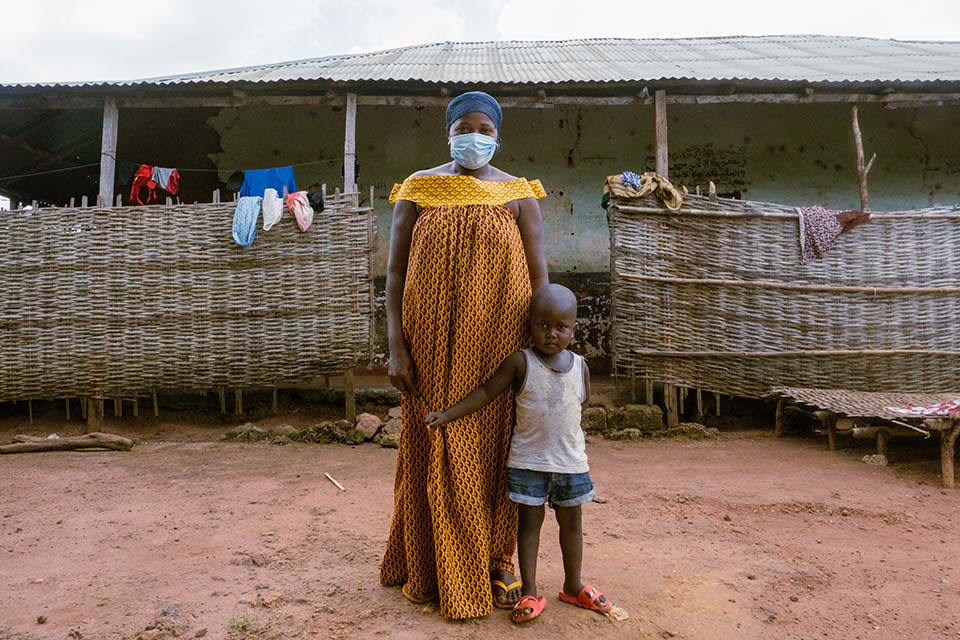 Khadja Embalo, with her son Sori Balde, uses savings to invest in economic activities such as selling peanuts, citrus and hot peppers.

Khadja Embalo has used her loan to invest in business activities, such as selling lemons, peanuts and hot peppers.

“It helps a lot,” she says of the program.

In Guinea-Bissau, savings groups have been implemented in both the Bafatá and Gabu regions. Through the project, 162 groups, comprised of more than 4,000 people in total—nearly 80% of whom are women—have been created. 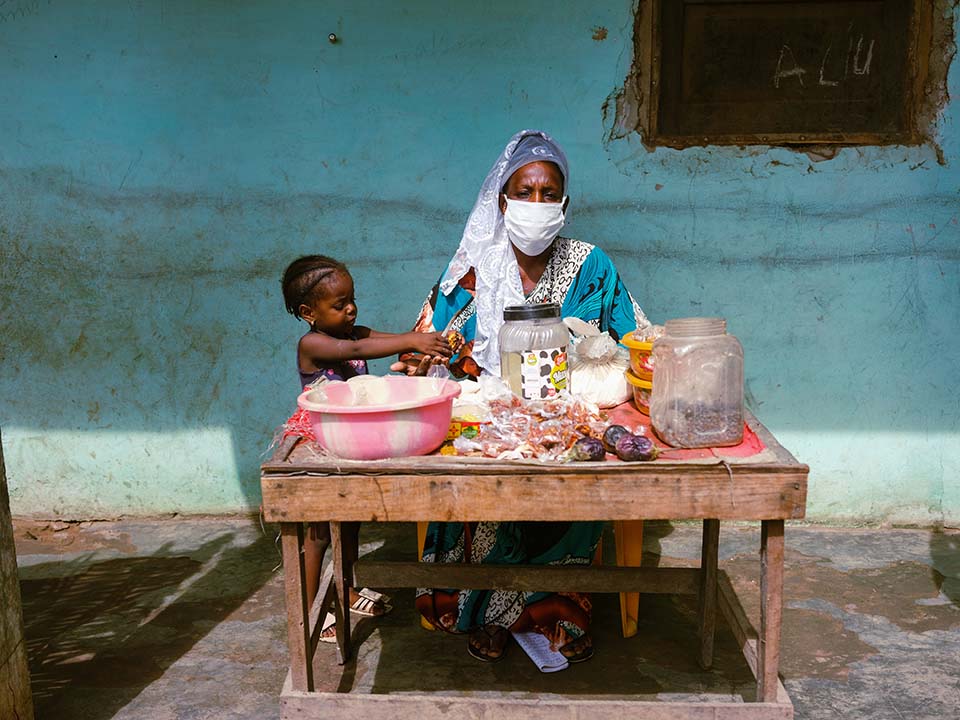 Mariama Diallo is a mother of three who supports her family through numerous economic activities, such as selling vegetables and spices at a small roadside stall.

In the town of Gabu, Mariama Diallo is just beginning to see the benefits of the SILC program that was started last March in her neighborhood.

“When we manage with SILC, I can invest in my business,” says the mother of three who has a vegetable stand near her home. “I cannot make money if I cannot buy things to sell.”

While Diallo says she dreams of eventually building a new home with her earnings, her neighbor Tenem Coulibaly says she is currently using some of her increased income for better health care for herself and her family.

“It feels good,” Coulibaly says. “When you support your child, you are helping the future.”