Thriving Despite HIV in Kenya

Janet Kanze Baya discovered she was HIV-positive in 2012, shortly after her first child was born.

“Within the group I was attending, I was the only literate person. The other group members couldn’t even write down their names on the attendance list. So I helped write their names to track attendance. Because of this I was identified as someone who might have the potential to help others,” Janet says. 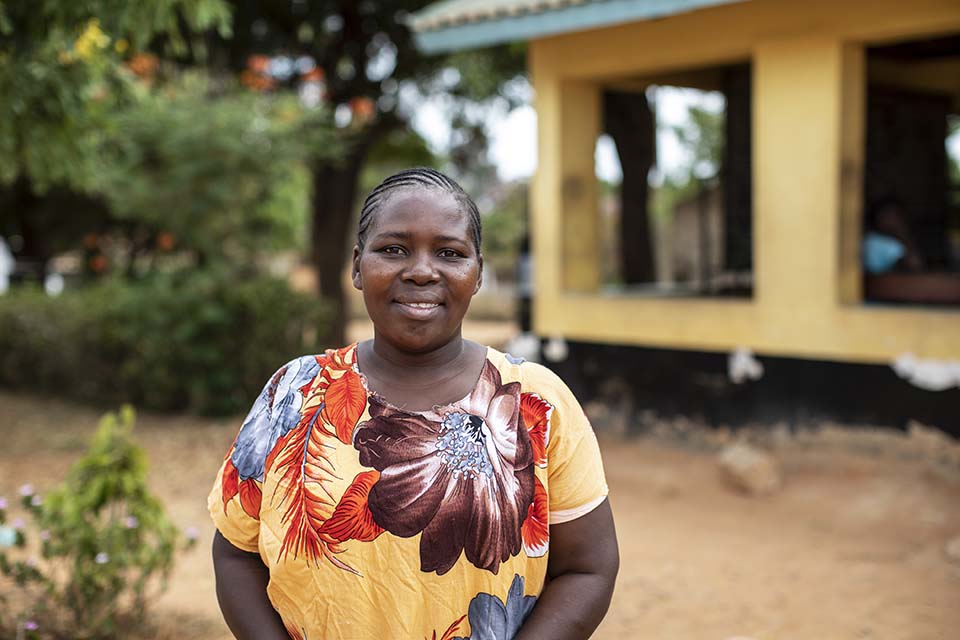 Janet's work as a mentor helps parents and other caregivers provide support to children affected by HIV/AIDS. The project improves access to health services, helping families set up and run small businesses, linking them to community savings groups, and strengthening the ability of local governments and institutions to respond to child welfare and protection needs.

In 2018, she became a Community Mentor Mother as part of Nilinde, a project which supported children and families living with HIV and was funded by the U.S. Agency for International Development, or USAID.

“I was identified as a potential Community Mentor Mother by a case manager. The case manager came to look for an HIV-positive mother who is able share her own life journey [as a way] to support other women and children who are living with HIV to be able to accept their own status,” Janet says.

Since then, she has really embraced her role.

“I was taken for a three-week training where I learned about HIV, how to support other mothers so they can bring up their children not to be infected with HIV, and how to support a person who is HIV-positive to ensure that they are adhering to their medication well,” Janet says. “I feel like this is something I have to offer, and I am able to use my HIV status to provide mentorship and also impart hope among other caregivers and children living with HIV.”

When Nilinde ended in 2019, its caseload was taken over by MWENDO, a project also funded by USAID and the President's Emergency Plan for AIDS Relief. MWENDO stands for Making Well-Informed Efforts to Nurture Disadvantaged Orphans and Vulnerable Children—but is also a Swahili word meaning “motion.” The goal of the project is to help parents and other caregivers provide support to children affected by HIV and AIDS. The project does so by improving access to health services, helping families set up and run small businesses, linking them to community savings groups, and strengthening the ability of local governments and institutions to respond to child welfare and protection needs.

Under MWENDO, Janet has provided support to 60 children with HIV and their families in Kilifi County.

Community Mentor Mothers are effective because they’ve gone through the same experience as those who they are in  counseling.

“I learned about my HIV status almost immediately after giving birth to my firstborn child,” says Janet. At the time she had felt some flulike symptoms and visited a local clinic where she was tested for HIV. When the test came back positive, she was referred to Ganze Sub-County Hospital where they revealed the test results to her.

“The testimony I use to empower women to take their medication is the fact that when I learned about my status, I did not procrastinate on accepting my status and taking medication. Within two weeks I was already on antiretroviral treatment. My child was also placed on treatment to prevent mother to child transmission of HIV,” she says. “I tell the mothers how this has ensured I have good health, how I have never gotten sick, I have never had any opportunistic infections, my children are healthy, my husband is healthy, and nobody can tell I am HIV-positive just by looking at me. Those are the stories I use to empower women to take medicine, because with [antiretroviral medication] they will remain healthy and nobody will get to know their status unless they choose to tell them.”

Janet also shares a story of perseverance with other mothers. When she was first placed on antiretroviral medication, she did not react well.

“I had some side effects, especially headaches and dizziness. But because I knew I had to take this medicine to prevent transmission to the child, I was able to stand the severity of the side effects. And then after a month, the side effects were not so bad,” Janet says.

A number of factors contribute to lack of suppression among the children and adolescents served by Ganze Sub-County Hospital. These include challenges related to lack of transport to health facilities, caregivers not telling children their status, lack of basic knowledge and understanding about HIV, and stigma among caregivers.

Often in Kenya, people living with HIV will choose to receive their medication and counseling from health facilities that are long distances away from their homes in order to avoid bumping into other members of their communities and prompting unwanted questions. The downside of this is that families often cannot afford the cost of transportation or to miss a full day of work. MWENDO has begun covering travel expenses to make travel easier for participants.

“The children who are getting treatment from this facility, they come from areas far away but no one has missed their appointments,” Janet says. “That is because we already did an assessment to identify the gaps that would lead to somebody missing their appointment. If it could be due to transport, this is provided up front through MWENDO to ensure that the children can come to the facility.”

To improve adherence, children and adolescents are also enrolled in peer groups, known as Operation Triple Zero, which meet monthly at the health facility. These groups offer a safe space where HIV-positive adolescents can share their experiences, receive support from peers, learn how to take charge of their health and make better-informed decisions. They also learn about the treatment goal of achieving the “three zeros”: zero missed appointments, zero missed medications and a zero viral load.

“We have been able to support the children to achieve suppression and also to enhance their knowledge about [antiretroviral therapy] and HIV,” Janet explains. “When the children assemble at the facility, they learn about their medication so they understand their pills. They know them by name. And they get to know them by the color and the type of bottle that they are in, so that in case of anything at the household, there won’t be a mix up between the medicines. Then everybody knows clearly which medicines they take,” she says. It is also important to bring caregivers into the fold.

“These caregivers have been empowered to just accept their children and accept the responsibility of taking care of a child, because it is a parent’s role, so we have been able to instill that in the parents when they come to the facility,” Janet says. The next step is disclosure.

“For instance, I am able to tell the parent that there is a need to inform these children why they are taking [medication] because if you don’t it will work against you. I even tell them the right words to use when talking to a child, starting from what the child already knows, and moving to advanced information, so the child knows why they are taking medicine,” Janet says.

“I tell the parents to tell the children, ‘You have tiny viruses living in your blood, and these viruses, when they are active, they are able to lower your immunity. So you are taking this medicine to reduce the activity of these tiny viruses in your body so you can be healthy,’” Janet explains.

Revealing their status at a young age is critically important to avoid the negative consequences of telling a child too late in life.

“When a child living with HIV turns into an adolescent without already knowing, they bump into accidental disclosure either in school, or at the health facility, or even among relatives. After accidental disclosure, most of them lose trust in the parent and this has a very negative impact on their treatment. Some of them [stop treatment] and even die,” Janet says.

“It is important to package this information for specific age groups so that as a child is growing up, from the age of 6 moving forward, there is certain information they are being given that is age appropriate. For example, at 6 years, a child can be empowered to understand that there are different things that cause illnesses, such as viruses or bacteria. You can explain that they have one of the two and that is why they have to take medicine every day so that that virus or bacteria does not reduce their chances of living. When a child nears 12 years of age, they are able to understand what HIV is fully,” Janet explains.

In some instances, especially in the case of elderly grandparents, if the caregiver simply doesn’t have the capacity to care for a child with such needs, Janet tries to identify another family member who can take over the responsibility of monitoring the child’s health and adherence to medication. This could be an elder sibling, an aunt, uncle or even a cousin.

In her community, Janet also performs monitoring and outreach to identify people at risk who may not already know their HIV status.

“I support the community, not just those who already know they are HIV-positive, but also those who show symptoms and have fear of just being tested to know their status,” Janet says. “I am now well-known in the community. They call me Mrs. Jefwa,” she says, referring to her husband’s name.

By being open in her own community about her status and the work she does, she has been able to convince many people to seek HIV testing services.

“They say, ‘If it weren’t for Mrs. Jefwa, we could count a number of people who would have died already. But because of Mrs. Jefwa, they are now alive and able to live their normal lives.’”

“I have been able to help people, who had fear of even coming to the clinic, to begin taking their medication and to understand that life is not about others, life is about you. And when you are happy and you are accepting of yourself, every other person out there will see you just as any other normal human being. Because of this, people have been able to come here and take their medication, so they can stay healthy enough, so they can continue looking for small jobs or start small businesses, so they can support their families..”

“The difference with MWENDO is that MWENDO is able to conduct an analysis of every potential problem at the household level and target different children with different interventions based on needs. They also have a sustainability approach where the caregiver is not just given something for their immediate need—they are also provided with services that are able to address secondary needs,” Janet says.

“ For instance, a caregiver who has issues with food insecurity.If provided with business grants, we have seen caregivers who are able to go beyond buying food. They have businesses that are able [to earn enough income] to pay school fees for their children. They have businesses that are now able to support them to ensure that their children go to the health facility without failure, and without separate transport support because they are able to provide it through their earnings,” she says, adding, “It is the sustainability approach that MWENDO has that is so unique.”