Texting to Head Off Hunger

Wariso Dekamo waits for a herd of bleating goats to cross in front of him as he makes his way toward two haggling traders at a livestock market in Arsi Negele, Ethiopia.

Wariso listens, jots down notes and nods as the woman points to fat deposits on the goat as an added measure of its value. 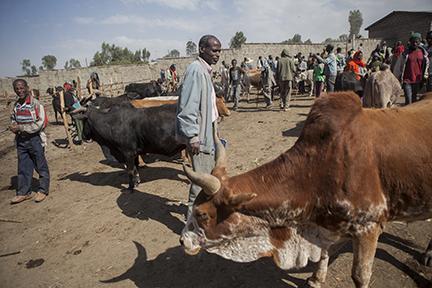 Wariso Dekamo assesses prices in a weekly visit to an Ethiopian livestock market as part of a CRS early warning system for food insecurity. Photo by Sara A. Fajardo/CRS

Meanwhile, cows in an adjacent market stall moo their discontent as they are forced into pens and pinched to determine whether they are of poor, moderate or heavier weight. Again, Wariso observes the transactions, asking questions to determine how the market is faring. Are prices up or down this week? The answer is one predictor of economic and nutritional health in this region of Ethiopia.

A glut of animals could mean that crops are suffering and people are dumping animals they won't be able to feed. In drought-prone areas of Ethiopia, where hunger is cyclical, information like this is critical to helping the government and other agencies predict food insecurity and plan a response.

After compiling his notes, Wariso heads back to the office, where he crosschecks his findings with partner Zirhun Yohannes. This pair of data collectors helps feed a digital early warning system. The system is organized by Catholic Relief Services and the Ethiopian Catholic Church-Social and Development Coordinating Office of Meki-Wonji Branch, with generous funding from the American people through the U.S. Agency for International Development's Food for Peace program.

Market prices are just one of many indicators that Wariso and his partner routinely monitor. In addition to visiting the livestock market weekly, they've teamed up with local data collectors across 77 districts in the northern, southern and eastern regions of Ethiopia to gather information on 24 indicators that can portend hunger.

Although gathering such information is not new in Ethiopia, digitized transmission has revolutionized how the data can be accessed, used and analyzed to help identify food insecurity hotspots. The previous early warning system could take up to 3 months to produce a final report. The new system—with each of the 24 indicators and their corresponding coded responses—transmits information easily by text message to a central CRS-run database. From the data, CRS generates and shares monthly reports on food insecurity with our staff in the field, other aid agencies and the Ethiopian government. These reports enable more effective planning and coordination of possible responses to cyclical drought, crop failure or other shocks. 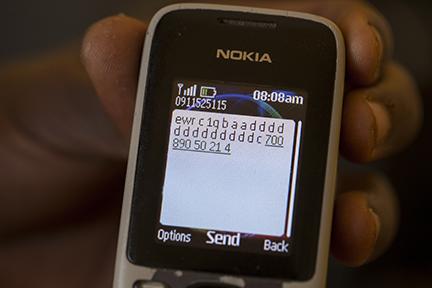 Text messages like this one travel weekly to a CRS-maintained database that is saving money and reducing the time needed to detect impending food emergencies. Photo by Sara A. Fajardo/CRS

The new system has eliminated weeks of paperwork, improved data accuracy and made real-time information accessible.

"I couldn't filter the old reports," says Shenkut Ayele, the early warning assessment and response coordinator. "If I was asked which districts had been highly affected by crop conditions, it was difficult for me to answer. It would take a week to decipher all the reports. The level of English was poor, and it was hard to tell what they were saying. In one paragraph they would say [a district] was fine and … next … that it was worse. I would have to follow up with a call. Now when I get the same question I can get an answer in only a minute," Shenkut says. "I simply export the data into Excel, go to the section on crop conditions, use a filter for worsening crop conditions, and I'll have the answer. With the raw data we can interpret it ourselves. Previously people interpreted the information, and we'd have to interpret their interpretation.

The new system not only provides more reliable and useful information, it also saves money. Shenkut says that the cost of collecting information through the new system is one-tenth of the cost of the paper-based system—$1,800 versus $18,000—when factoring in the cost of transportation, lost reports, printing, and data entry and correction.

The time and money saved can now be spent getting even more information and drilling down deeper to help predict and prevent food insecurity across Ethiopia. "This is a good system," Shenkut says, "It should go down to the community level, even the village level, where we could get even more information and respond more quickly with this data. This new system is efficient and needs to be adopted and scaled up by the government of Ethiopia nationwide."

We seek daily renewal from the source of all life, and so we pray ... END_OF_DOCUMENT_TOKEN_TO_BE_REPLACED

Our walk with God is reflected in our walk with others, and so we pray ... END_OF_DOCUMENT_TOKEN_TO_BE_REPLACED