Emmanuel Makanika used to have the tallest coffee trees of anyone he knew. Unfortunately, he didn’t realize this was not a good thing.

“Before, I didn’t know anything about pruning, so the trees would just grow to be as tall as they wanted to be,” Emmanuel says. When coffee trees are not pruned regularly, and when old trees are not cut back so that new shoots can take their place, yields drop significantly.

The coffee industry in Tanzania provides direct income to more than 450,000 small-scale farmers who produce about 50,000 tons of coffee per year. But coffee producers like Emmanuel often lack the know-how and resources to manage their farms or process their coffee in a manner that would garner top prices. Chronically low yields, averaging just 500 pounds of clean coffee per 2.5 acres in Tanzania, are largely due to poor production practices and an inability to cope with climate-related impacts. 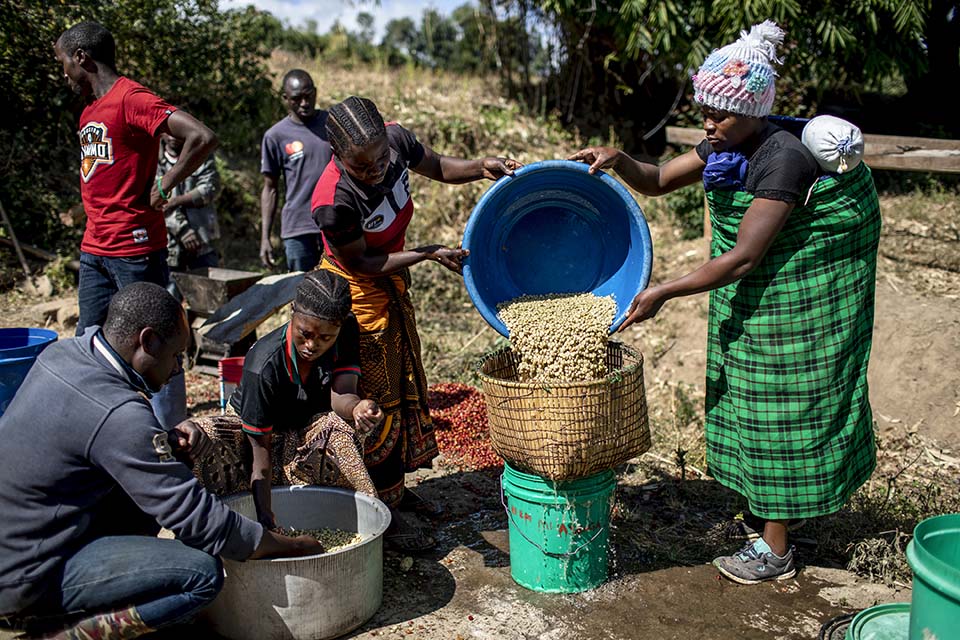 Now, through a project implemented by Catholic Relief Services and Hanns R. Neumann Stiftung, a non-profit that works with rural small-scale coffee farmers to improve their livelihoods, Emmanuel has joined a youth coffee producer group. As part of the group, he is learning vital skills and best practices such as pruning, irrigation, mulching, fertilizer application, pest and weed control, and grading and processing. The five-year, privately funded Kahawa ya Kesho—or “Coffee of Tomorrow”—project aims to empower 450 rural youth from the ages of 18 to 35 in Tanzania’s Southern Highlands.

“The main objective of the project is to improve the livelihood opportunities of youth so they can move out of poverty,” says 24-year-old Volina Kalonga, secretary of the Nkuyu youth coffee producer group in Mbeya district’s Shongo village.

The comprehensive trainings have covered everything from starting a coffee farm to caring for trees, to harvesting and processing, she says. In particular, the application of fertilizers was an area they desperately needed education on. 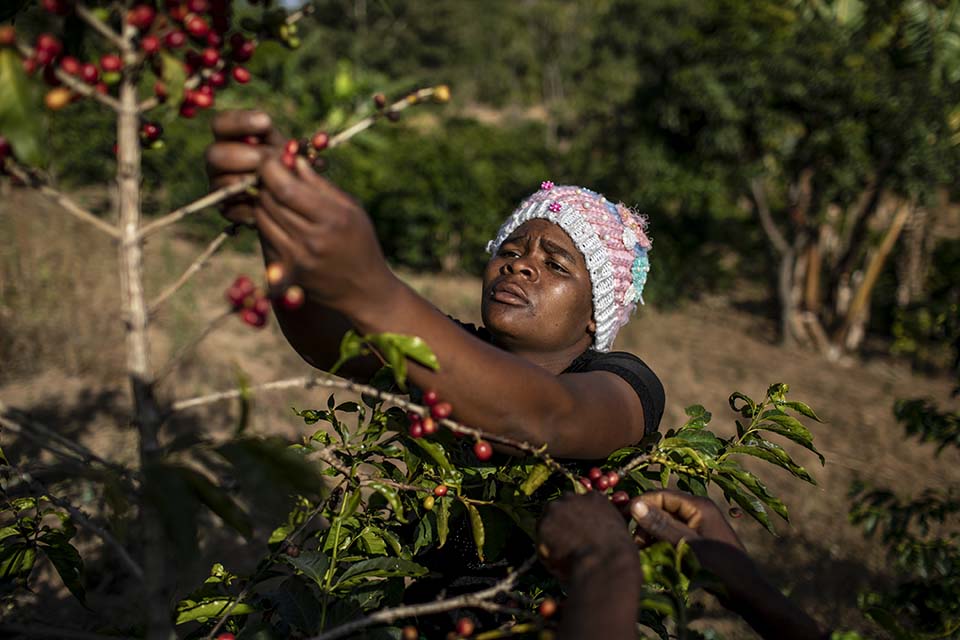 A member of the Nkuyu Coffee Group picks coffee on a farm in Igale village, Tanzania.

Coffee farmers can be incredibly reluctant to prune or cut down old trees. But that is exactly what is needed to improve yields.

“We’ve learned to remove extra suckers and do regular pruning,” says Juhudi Mwajunga, chairperson of the Nkuyu youth coffee producer group. “And we see the advantages of it … much better production.”

Harvesting at the right time and processing the beans correctly, is also key. “We learned that coffee can change from green to orange to yellow to ripe red, when it should be picked,” Volina says.

“After harvesting coffee, previously we would wait for a long time without processing the cherries, maybe even two days,” says Jenipher Kalonga. “Now we process within eight hours at the most.” Processing coffee cherries soon after harvesting helps ensure their quality—the cherries don’t sour, which can impair the flavor of the coffee. 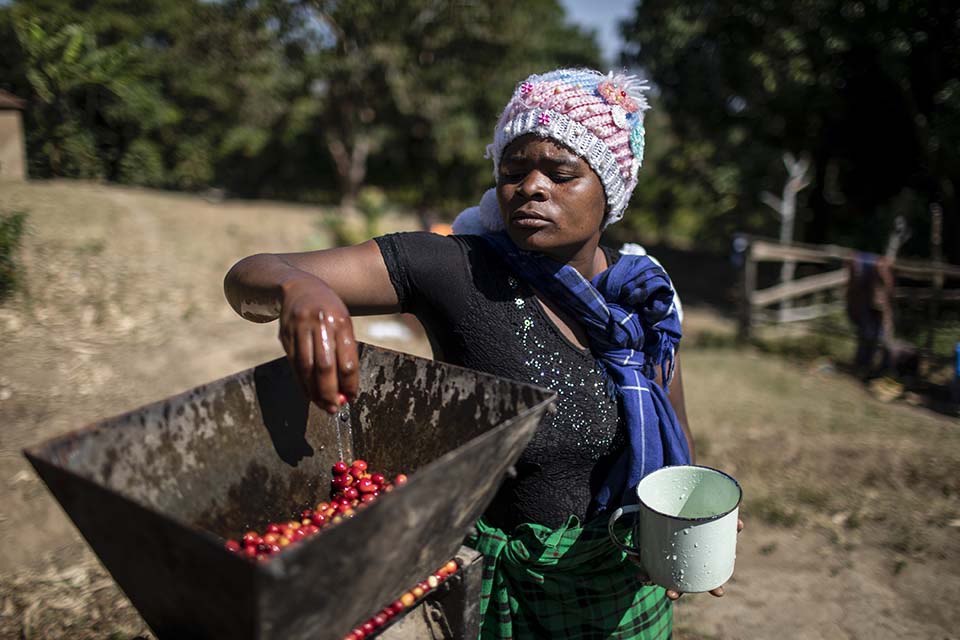 A woman processes coffee cherries as part of a project to increase livelihood opportunities and strengthen the economic empowerment of rural youth between the ages of 18 and 35 in Tanzania’s Southern Highlands.

They also learned how to separate and grade their coffee beans. “We used to mix it all together,” Jenipher says. “Now, before processing the beans we sort the good from the bad and separate them for processing.”

Members of the group are seeing significant improvements in the quality and quantity of their yields.

For example, while Emmanuel used to get just two pounds of coffee from three trees, now he can harvest almost eight pounds from a single tree.

In the Southern Highlands, where the Kahawa ya Kesho project is implemented, coffee production is threatened by a range of factors such as climate, pests and coffee diseases.

As a part of the program, farmers learn about the potential benefits of planting hybrid trees. “In previous times, most farmers believed that the local varieties of coffee trees were better,” says Frank Komba. Unfortunately for farmers loyal to the local trees, that is not the case.

“The local variety can be affected easily by climate change, drought, heavy rainfall or coffee berry disease,” Frank says. “So we are encouraging them to adopt new hybrid varieties, which are very strong against diseases,” and are also more resilient in the face of extreme climate-related events. 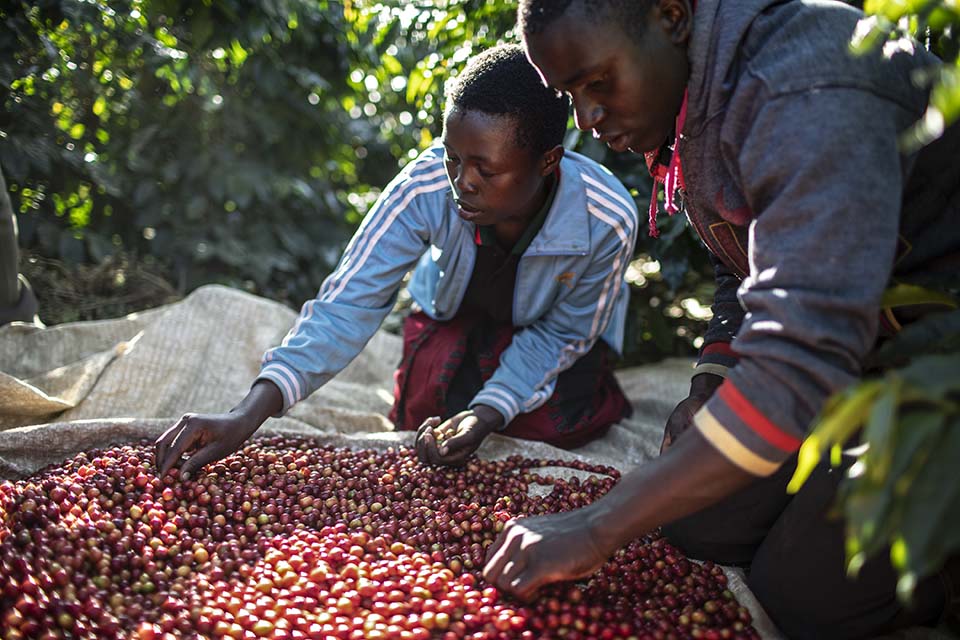 Members of the Nkuyu Coffee Group remove poorer quality coffee cherries from their harvest on a farm in Igale village, Tanzania.

Juhudi says he has fully embraced hybrid trees. “Before I had old trees. Now I have started planting new hybrid varieties of trees from TACRI,” he said, referring to the Tanzania Coffee Research Institute. Juhudi has purchased 200 hybrid seedlings at a cost of 13 cents per seedling.

“Due to climate change, there are a lot of challenges,” says Emmanuel. “Previously there was an issue about the lack of rain.”

Today, Emmanuel is adapting. “I’ve learned about water harvesting. Now I have a specific place on the farm where I collect water, and I use it when there is no rain,” Emmanuel says. 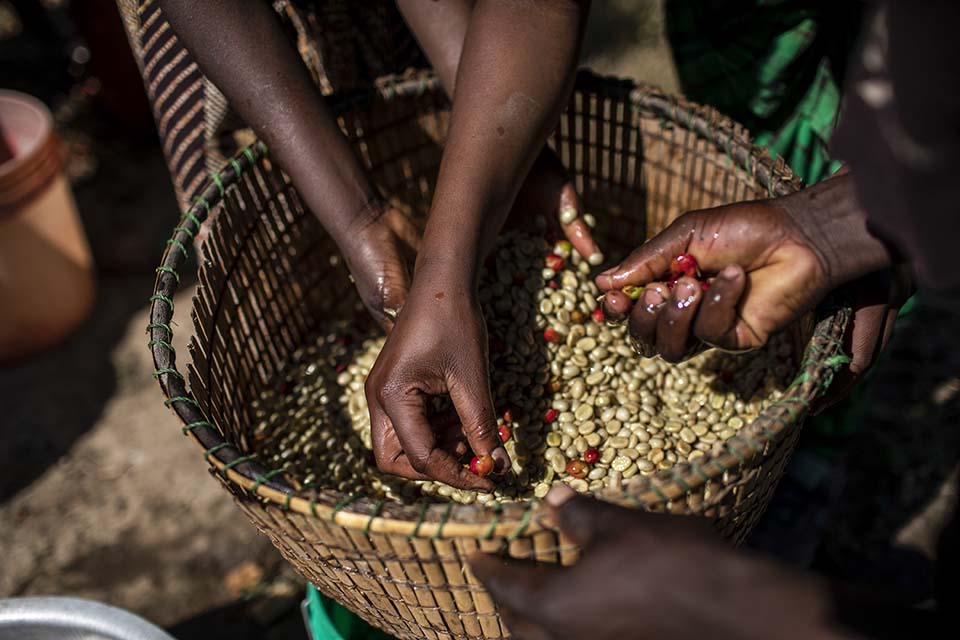 Coffee accounts for approximately 5% of Tanzania’s total exports. Mbeya in particular is an expanding coffee growing region with about 126,000 acres of land under cultivation and a growing number of central processing units.

Michelle Kiwia, Kahawa Ya Kesho project coordinator for CRS, says that supporting small-scale farmers is key to improving the overall quality of coffee from the region.

That’s why CRS helps coffee producer groups to form savings and internal lending communities, where members can pool their money, save and borrow to invest directly in their coffee farms in the form of inputs, land or manual labor.

“You cannot do production without money.”