For many Americans, debit cards have almost replaced money for everyday purchases.

Now they might do that for thousands of Syrian refugees and Jordanians impacted by the refugee influx.

Catholic Relief Services and Caritas Jordan are providing about 1,800 people with rental assistance through prepaid debit cards in a pilot project to streamline assistance and give new freedom to those who use them. 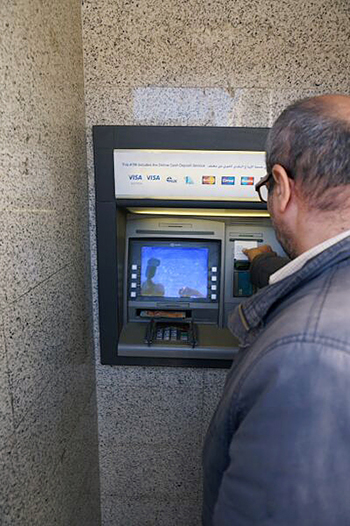 Debit cards provide refugees from Syrian conflict with choice and a sense of normalcy. Photo by Maggie Holmesheoran/CRS

Ahmed* and his family receive a 3-month rental subsidy of just over $600. The funds are crucial to families like his that live in urban areas but whose breadwinners are barred from the job market because they are refugees. They lack even basic necessities.

Since the war in Syria began, more than 9 million people have been displaced—their lives upended. Millions have flooded into neighboring countries in the largest forced migration since World War II.

Across the region, CRS is supporting more than 500,000 Syrian refugees with shelter, education and other necessities. Ahmed's family is among an estimated 600,000 registered Syrian refugees living in Jordan. The government of Jordan estimates the total number of Syrians to be closer to 1.4 million.

According to Maggie Holmesheoran, a CRS international development fellow who works closely with the debit card project, more than 80% of Syrian refugees in Jordan live in urban areas either with host families or in rented homes.

"Indebtedness and issues with landlords have become serious social issues in Jordan due to overcrowding," she explains.

Before the war broke out, Ahmed supported his wife and five children as an assistant civil engineer. But when their neighborhood in Homs became a war zone, the family abandoned everything and fled their home.

They made a dangerous overland journey through war-torn Syria to Jordan, initially settling at Al Azraq refugee camp, where they registered with the United Nations High Commissioner for Refugees.

Later the family left the camp for Amman. But without legal refugee status, they are no longer able to access UNHCR services, including cash assistance.

The family currently lives in a two-room basement apartment with a small kitchen and bathroom. At night, the sitting room becomes a sleeping room. Besides being too small for seven people, the apartment has a leaky roof and inadequate ventilation, making it damp and moldy. It's also infested by insects.

But despite its faults, Ahmed is thankful for the shelter, and for the debit card program that helps pay for it.

Through the program, renters receive a standard amount of money, regardless of their actual rent costs, and can use leftover cash to buy household necessities.

Holmesheoran explains that in the past, people like Ahmed would receive rental assistance through checks that would be made out to them or to their landlord. The process was clunky. A renter had to visit an office multiple times to receive the checks, adding transportation costs and logistical challenges.

"At first, I was confused and afraid to make mistakes," says Ahmed, of using his debit card. "But now, it's easy."

"When card users in this program could access their money independently, it improved their sense of self-confidence, and also made them feel more normal, which is really important for people who are in the midst of a crisis," Holmesheoran says.

Normalcy, and a return to their old life, it turns out, is something Ahmed and his family deeply crave.

"If they say that everything is OK in Syria, we will go back immediately," Ahmed says.

But when asked how they will manage right now, Ahmed raises his palms to the sky.

August recess is a key moment to meet with your members of Congress while they are out of session... END_OF_DOCUMENT_TOKEN_TO_BE_REPLACED

Watch videos on the issues of hunger and climate change here. END_OF_DOCUMENT_TOKEN_TO_BE_REPLACED