Syrian Refugees: Starting Up and Starting Over

In Syria, Hanadi made and sold perfume, Mohammed had a thriving repair shop and Wafa employed five people in her beauty salon.

But they are not in Syria anymore. They are in Egypt. They arrived with few possessions and little savings.

What would you do?

Hanadi, Mohammed and Wafa are among the tens of thousands of Syrian refugees trying to start new lives in Egypt—a country where jobs were already scarce. Myriad legal hurdles prevent most of them from obtaining work permits. Many are left to eke out a living in the informal economy, where there is little job security, wages are low and discrimination is rampant.

Catholic Relief Services is helping the refugees through a project that provides business and legal training, and grants startup capital. Participants write business plans, and can take supplemental vocational training to bolster their technical skills. They receive ongoing legal and technical support. The project supports refugees and asylum seekers from all nationalities living in Egypt, but a significant proportion are Syrians.

“The goal is go beyond short-term help and give refugees the tools and resources they need to become productive, self-reliant members of Egyptian society,” explains Yumiko Texidor, who oversees the project.

“The training is meant to help clients establish more resilient businesses because they can better navigate challenges and solve problems when they arise.”

The CRS project is funded by the U.S. State Department’s Bureau of Population, Refugees and Migration. Since it began in 2013, with funding from the U.N. High Commissioner for Refugees, the project has supported an array of businesses—from beauty salons to food vendors. In six months after opening, more than half the businesses were already generating a profit. 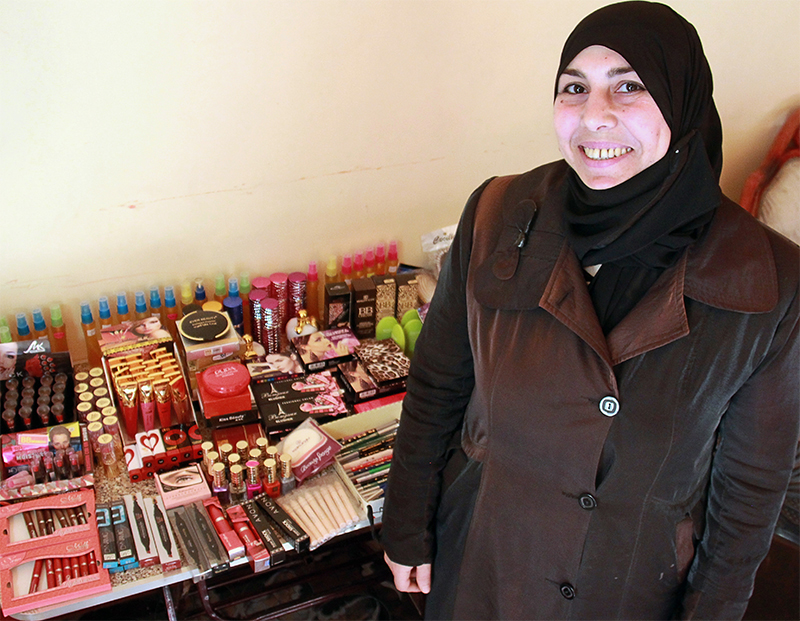 With CRS’ help, Hanadi sells cosmetics and homemade perfume to a growing clientele in greater Cairo. “I feel like I can do anything, and that nothing is impossible,” she says. Photo by Nikki Gamer/CRS

A single spray from a perfume bottle transports Hanadi back to her native Syria. The fragrance—rich and floral—is called Damascus Jasmine.

“In Damascus, there were so many Jasmine trees,” she remembers, smiling as she holds a bottle of the homemade scent to her nose. “They always smelled so beautiful.”

With CRS’ help, Hanadi expanded the cosmetics shop that she runs out of her apartment. Now, a card table serving as her counter holds every makeup product imaginable, from eyeliner to lip gloss. Damascus Jasmine is among the many scents she makes to sell—along with the other products—to her growing customer base in greater Cairo.

The life she knew as a businesswoman working with her husband in Syria came to an end when heavy shelling destroyed their home and her husband’s barbershop. Without savings or help from family or friends, Hanadi and her husband had to start over in Egypt. To get there, they sold their only possession—a car—to pay for the plane tickets.

“In the beginning it was so hard for us but now we are adapting,” she says.

Hanadi had started selling her homemade perfumes to neighbors before participating in the CRS project. But she didn’t know how to grow her business. She has since learned how to use a text-messaging app to announce new products to clients.

“I learned to be more confident and how to make the business sustainable,” she says. “I feel like I can do anything, and that nothing is impossible.” Someday, Hanadi wants to send her daughter to private school so she can achieve her dream of becoming a lawyer.

“My favorite part of running my business is earning enough money to cover all my children’s expenses,” she says. “Despite all of the hardships we’ve suffered, our kids keep us going.” 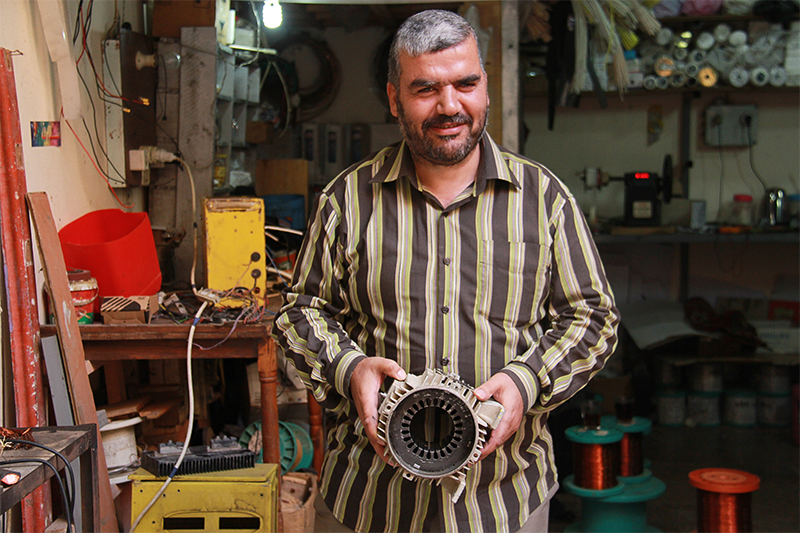 Mohammed is working on an engine in the Cairo repair shop he opened. “I want to thank CRS for giving me a new beginning,” he says. Photo by Nikki Gamer/CRS

Although it took more than 30 years for Mohammed to build up his Damascus-based engine repair shop, it only took an instant for a bomb to destroy everything.

“I was one of the most sought-after businessmen in Syria for my industry,” Mohammed says. “I was so proud of my work. I was so happy. I didn’t have any financial problems.”

Mohammed and his family lived in a five-bedroom villa with a pool. With 10 employees, his repair shop specialized in electric motors for factory machines.

But the war thrust Mohammed into the unknown. He and his family left Syria without any possessions.

“It is painful to leave the country where you grew up,” he says. “When we were leaving, I cried for 2 days.”

Mohammed lives in a cramped apartment in the greater Cairo area with his wife, their four sons and his mother. Two of his sons sleep in the living room with his mother.

The CRS small business project has given his family a thread of hope by helping him open an engine repair shop. On a weekday afternoon, the shop—about the size of a single-car garage—is a flurry of activity.

“I want to thank CRS for giving me a new beginning,” he says.

Before he opened the shop he was working odd jobs. Although his income still isn’t enough to meet all his family’s needs, it has more than doubled since he received the grant.

What keeps him going despite all he’s suffered? “To rescue my sons. To guarantee them a good lifestyle,” he says.

One thing Mohammed didn’t lose since his move from Syria is confidence in himself.

“No job is impossible for me. I can fix everything,” he says. 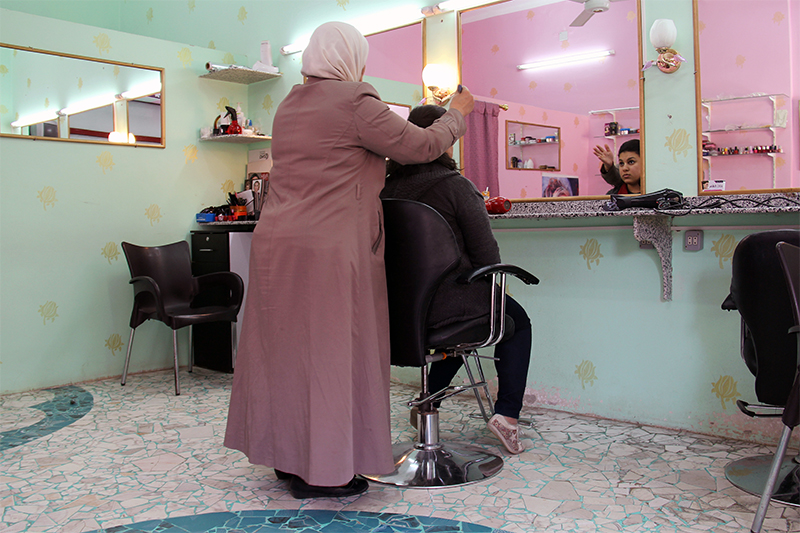 Wafa, a Syrian, opened a salon with CRS’ help. “I’m so proud that I can cover my family’s expenses. One of the best feelings is knowing that I don’t need anyone to give me money; I don’t need help from anyone,” she says. Photo by Nikki Gamer/CRS

Wafa was only 15 when she started cutting hair, learning the trade from her hairdresser aunt.

“She taught me everything,” Wafa says.

Wafa eventually opened a full-service salon in Damascus. She had five employees. It was a happy time, and she was proud of her work. But then the war started, so she left her business behind.

“There were many bombings near our house. We were so afraid and scared,” she remembers. “We saw no hope to continue to live in Syria. Some nights I slept with my hair covered because I was so afraid someone would break in.”

It hurt to leave her native land. “Words cannot describe the feeling. It was so painful,” she says.

Wafa, her husband and their three daughters arrived in Egypt with clothes and a few other possessions.

“I had some gold jewelry, and I decided to sell it to pay for my children’s expenses,” Wafa says.

To make ends meet, her husband, a former schoolteacher, sold sandwiches. In the meantime, she started styling women’s hair out of their apartment. When she heard about the CRS business program from friends, the timing was perfect because her apartment was becoming too small for her growing clientele.

“It’s a miracle that’s happened to us,” she says.

Her new salon, a bright space with sea-green walls and a tile floor, is called Damascus Girls—as a reminder of her homeland.

“My favorite part of being a hairdresser is making new relationships with clients,” she says. “My regular clients turn into my friends after a while.

“I feel like this business is my baby. It’s grown in front of my eyes,” She says.

Wafa hopes to expand the business. In the meantime, she’s proud of being resilient in the face of so many challenges.

“One of the best feelings is knowing that I don’t need anyone to give me money,” she says, “I don’t need help from anyone.”

Read the latest update from CRS country programs and partners around the world as they respond to... END_OF_DOCUMENT_TOKEN_TO_BE_REPLACED

Read the latest two-page summary from CRS country programs and partners around the world as they... END_OF_DOCUMENT_TOKEN_TO_BE_REPLACED