In his 54 years of life, Jimmy Patterson traveled only once outside the United States. He was 8 years old, and it was to the resort town of Acapulco, Mexico.

So when the lifelong Texan hopped on a plane bound for Jordan on October 4, 2013, he knew the trip would be like no other. 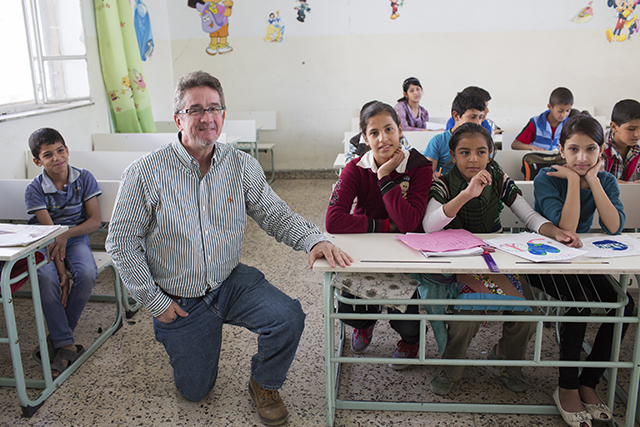 immy Patterson with Syrian refugee children in their classroom at the Latin School in Jordan. Photo by Andrew McConnell for CRS

What Jimmy didn't realize was that the people he would meet, Syrian families who'd fled home and country, would be mirror images of himself. The only significant difference was that, unlike him, they knew the cruelty and brutality of war.

He would also come to see the trip as a pilgrimage. In it, he would come to terms with the pervasive unrest that plagues the holiest places of his Catholic faith.

'Human beings have no borders'

Jimmy traveled to Jordan at the behest of a group of anonymous donors from his hometown of Midland. They asked him to ensure that their support for a CRS-supported program that provides trauma counseling, care and education for Syrian refugee children was making a difference.

But Jimmy learned far more than he expected. "The people who are having to endure this [war and exile]—the people who get up every morning and feed their children and go to work to pay the rent or the electric bill—these people are exactly like us," Jimmy says.

That realization came as he met family after family and child after child. Each person recounted a story of horror and heartbreak from a now 3-year war. During that time, nearly 2.5 million Syrians have fled to bordering countries. The most moving story, says Jimmy, was that of a woman who, in the panic and confusion of fleeing from her home, left behind her 2-year-old daughter, still asleep in her bed.

Now in a country not their own, these Syrian refugees struggle to live and work, while bearing the uncertainty of their futures. They are worlds removed from Jimmy, a professional writer who's been married for 30 years and has three grown children. Yet in these refugees, he recognizes himself. 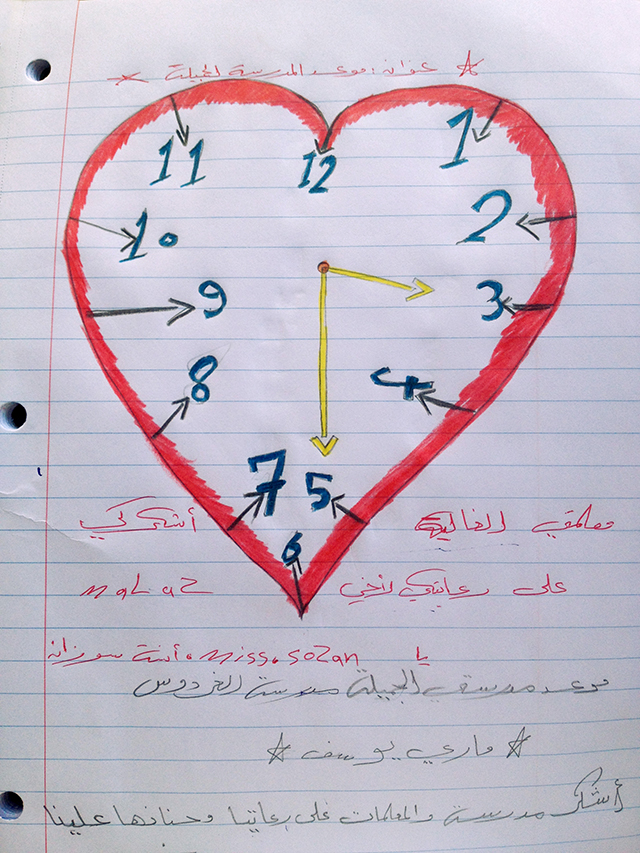 A heart-shaped drawing of a clock points to 3:30—the time school begins for the refugee children. Photo by Jimmy Patterson for CRS
In reporting back to the donors, Jimmy tells stories of the children he met, the priests who teach them, his delight in discovering the universality of the fist bump. He recounts the grace of people who, nearly broken by their losses, are still able to extend hospitality to a stranger.

He tells them that the program has had a profound effect on the lives of the 1,000 children who participate in it. With a renewed gift in early 2014, the program will reach 10,000 children this year. They now have safety, routine, a supportive environment, daily meals and counseling. In the program he visited, the Syrian children begin their school day at 3:30 p.m., after the regular school day has ended. They learn poems and the days of the week. They learn how to express themselves and how to cope with loss and fear.

"This donation has made it possible for these children to continue to go to school," Jimmy says. "They may not get a report card at the end of the year, but it keeps their minds active."

"And it's keeping them interacting with others in the same position they're in," he continues. "The education they're receiving is providing them with comfort, friends and school."

Jimmy says the program is precious to the parents—and the children. As proof, he points to a crayon drawing by one of the Syrian children. It's a clock drawn in the shape of a red heart, its hands pointing to 3:30, the time that class begins every day. 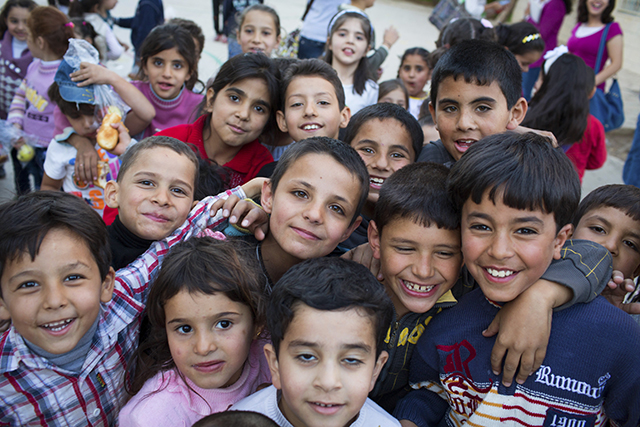 Students at the Latin School study core subjects like math, science and English. Their day also includes physical education, arts and crafts, and trauma counseling. Photo by Andrew McConnell for CRS
Jimmy created a personal blog during his trip. In it, he included stories of a boy named Samir who served him tea, of priests made holy by their work with the refugee children, of the courage of survivors who reached out to help others.

But he left one thing out of his accounts. One could call it an epiphany. For years, Jimmy struggled to reconcile how the conflict and violence that plagues the Middle East could exist in the very places where Jesus and his apostles walked and lived.

During his trip, Jimmy visited the Dead Sea and the River Jordan and learned that Jesus is believed to have been baptized by John in a place called Bethany.

But meeting the refugees, and the people who were helping them, allowed Jimmy to bear witness to his faith. He discovered that it's not a matter of how strife exists in the places Jesus walked, but how love manifests in those very places.

"It's the message...to love your neighbor," Jimmy says. "It was a perfect example of the Gospels in action that's occurring through the work of CRS and Caritas in the Jordanian villages."