It’s December. A young woman, sitting on the floor of a modest shelter, cradles a small bundle in her lap. She gently pulls back the blanket that shields her infant’s face from the biting cold. The baby’s eyes focus on her. She returns its gaze with a tender smile. 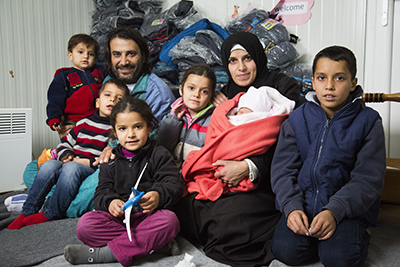 Zaynab Ahmad cradles her week-old baby, Layla, at a CRS-supported transit camp in Tabanovce, Macedonia, near the Serbia border. Photo by Elie Gardner for CRS

The baby is only a few days old, born to a mother who had left her home and embarked on a long, harrowing journey. Sitting here on the bare floor, all this mother has is her family and the warmth extended to them when they arrived in this strange place, far from home.

“When I heard about this family, the first thing I thought about was the Holy Family,” says Bill O’Keefe, vice president of government relations and advocacy for Catholic Relief Services. “Here we are in Advent, we're thinking about the Holy Family, about Jesus, about Mary, and here was our modern‑day Mary giving birth, not in a manger, but in an inn that is a transit camp in Macedonia, just north of Greece.”

O’Keefe met the family on a trip to witness the Church’s response to the refugee crisis in Europe. The mother’s name is Zaynab Ahmad. She’s from Syria.

Zaynab was 9 months pregnant when she arrived at the camp after fleeing their home in Aleppo with her husband, Mohammad, and their five children. Like thousands of others, the family embarked on a perilous journey in search of a better future.

More than 750,000 people from countries like Syria, Iraq and Afghanistan arrived in Europe in 2015, driven from their homes by conflict, violence or poverty. Some spend their life savings, or take on massive debt, to pay for the journey. Many risk their lives for a new start. In 2015 alone, more than 3,600 refugees and asylum seekers drowned in the Mediterranean attempting to reach European shores.

Zaynab’s family was forced to leave Syria when Mohammad’s bakery was destroyed in the civil war there. During their boat journey to Macedonia, they lost all of their belongings when smugglers threw their luggage overboard as they crossed the Mediterranean sea. They hoped to arrive in Germany or Norway in time for the baby’s birth, but as soon as their train pulled into the station in northern Macedonia, Zaynab knew it was time.

Exhausted, desperate and with the early signs of labor, Zaynab was greeted by staff of CRS’ partner Caritas Macedonia. She delivered a healthy baby girl and named her Layla.

Today, she and her baby have found shelter in a CRS-supported transit camp. CRS and our partners across the region are providing food, clothing, hygiene items, and medical, legal and translation services to families like hers.

Zaynab and her family now await Layla’s birth certificate so they can continue their journey.

“I am constantly thinking about my children and the people on the border,” Zaynab says. “The more we stay here, the more anxious we get. Our only concern is to keep moving. We have lived through war. We don’t need much help—we only want to keep moving.” 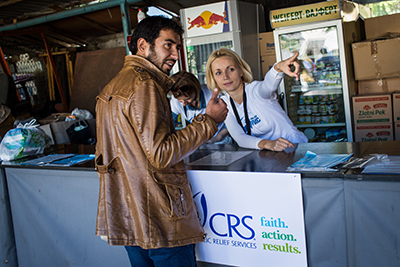 Across Europe, CRS works with local Church partners to provide critical services to refugees, including food, clothing, and translation and information services. Photo by Andrew McConnell for CRS

Their camp is located within walking distance of the Serbia border. Scenes like Zaynab’s are playing out in similar camps that have sprung up across Europe in recent months. Families arrive exhausted and confused, not knowing what their future, or the next day, will bring.

“Here are the people who are getting off a boat in Greece after a really perilous journey, and the first people they're meeting are staff from Caritas, who speak their language and are offering their support with a smile and with love and concern,” O’Keefe says. “And there is this family in this river of humanity, which is the European refugee and migrant crisis. And there they are, standing tall, standing strong. Somehow they're weathering this storm.”

The response to the growing refugee crisis, carried out by a compassionate and strong network of Catholic organizations, exemplifies Pope Francis’ reminder of our moral obligation to increase assistance to vulnerable refugees. The vast Catholic infrastructure in Europe helps CRS reach those most in need. To date, in partnership with local Church agencies, CRS has supported more than 70,000 refugees in Greece, Macedonia, Serbia and Croatia.

“I think that the response to this European refugee and migrant crisis is a reflection of the global Catholic community,” O’Keefe adds. “It's just an amazing sign of how the Church comes together to address a very specific, but very large, problem.

“The [refugees] know they have a long way to go. They know it's going to be a difficult journey—but at least they know there's someone on their side now.”

Remembering Zaynab and her newborn baby, O’Keefe adds: “I just kept thinking that we helped provide room at the inn.”

August recess is a key moment to meet with your members of Congress while they are out of session... END_OF_DOCUMENT_TOKEN_TO_BE_REPLACED

Watch videos on the issues of hunger and climate change here. END_OF_DOCUMENT_TOKEN_TO_BE_REPLACED