Syrian refugees in Lebanon are facing harsh conditions after storms dropped several inches of snow on tent camps in Lebanon's Bekaa Valley. Catholic Relief Services and our partner the Good Shepherd Sisters are distributing critical shelter materials, food, blankets and heaters. "There is snow everywhere and it's very cold," says Sister Micheline Lattouf of the Good Shepherd Sisters, which has supported Syrians crossing the border into the Bekaa Valley since the onset of Syria's civil war. 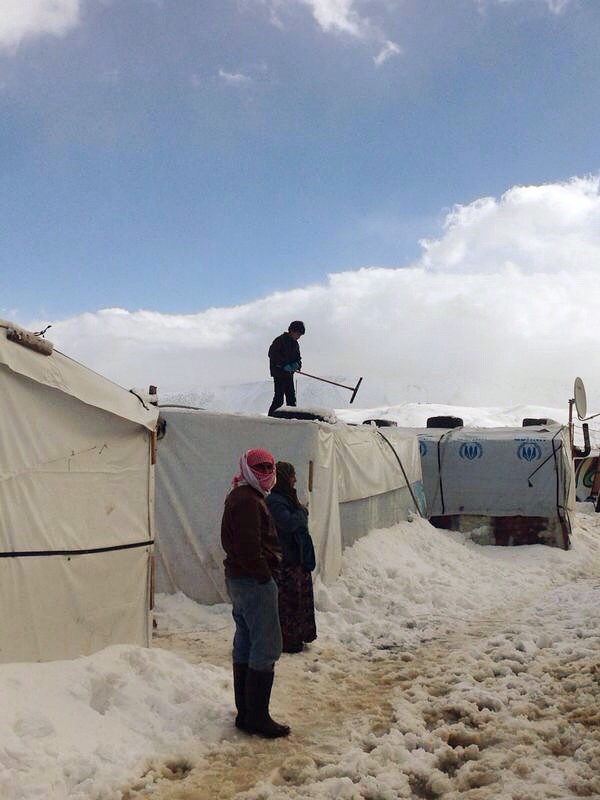 A powerful winter storm swept through the Middle East in January 2015, killing Syrian refugees in Lebanon and forcing thousands more to huddle for warmth in makeshift refugee camps. Photo courtesy of CLMC/Caritas

"Some roads are blocked and the camps are full of snow. Families gather all in one room—where there is a heater—sometimes 10 people in a small room."

"Refugees are locked inside their tents—they can't leave them," Sister Lattouf continues. "In the camps, latrines are outside the tents and since it's so cold, people can't use them anymore and this—in the long run—might lead to hygiene and sanitation problems."

In the Kurdistan region of northern Iraq, thousands of people who fled the violence and threats by ISIS are also facing harsh conditions without adequate shelter, supplies or even clothes. CRS and Caritas Iraq have worked in Erbil and Dohuk to provide safe shelter and other critical supplies and services.

Many of the displaced Iraqis who came to Dohuk are Yazidis and Christian minorities. They have been persecuted by ISIS and forced from their homes. In many cases, ISIS has killed and abducted their family members. 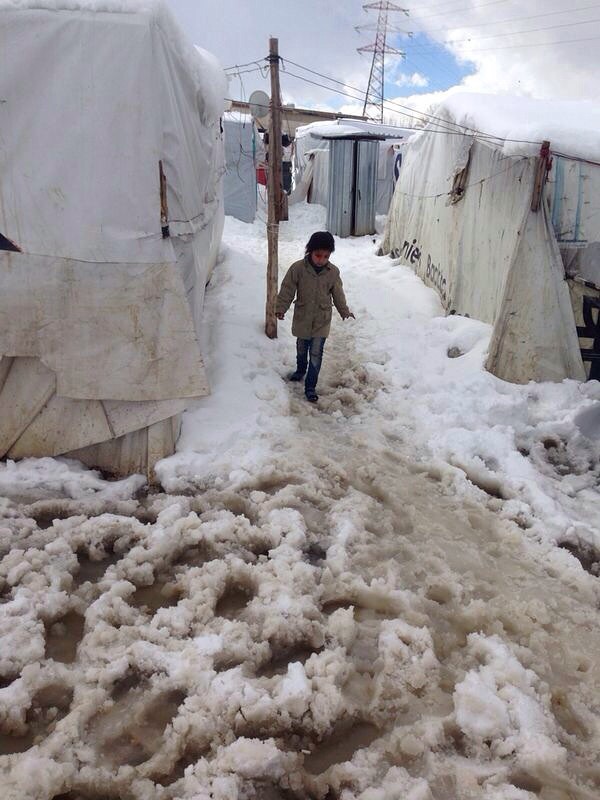 CRS is helping Syrian refugees prepare for the long winter ahead. Photo courtesy of CLMC/Caritas

"They're living in abhorrent conditions," says Erin Atwell, a CRS program manager working in Dohuk. "I recently met a young Yazidi girl and her even younger brother, living in an unfinished school, both parents killed by ISIS."

The children are among thousands of people currently living in abandoned and unfinished buildings without walls, doors or windows. These buildings were part of a construction boom that came to a halt about 5 years ago during the global economic downturn.

CRS and Caritas Iraq are weatherproofing many of the unfinished buildings with PVC windows and doors, covering holes and stairwells with plastic sheeting. We're also providing blankets, heaters and cooking supplies, and have entered into agreements with municipalities, homeowners and local contractors to make hundreds of houses habitable. In all, we hope to help 33,500 people through the winter with safe housing.

"It is important that people understand the complexity of the situation here. It can be easy to write it off as just another war in the Middle East," Atwell says. "It can seem overwhelming and a bit daunting to think we can have an impact on this situation. But we can."

Read the latest update from CRS country programs and partners around the world as they respond to... END_OF_DOCUMENT_TOKEN_TO_BE_REPLACED

Read the latest two-page summary from CRS country programs and partners around the world as they... END_OF_DOCUMENT_TOKEN_TO_BE_REPLACED