Birhan T/medhin* has persevered through the droughts that have plagued Ethiopia in recent years, but after her harvest was wiped out by flooding she considered uprooting her family to migrate in search of day labor. 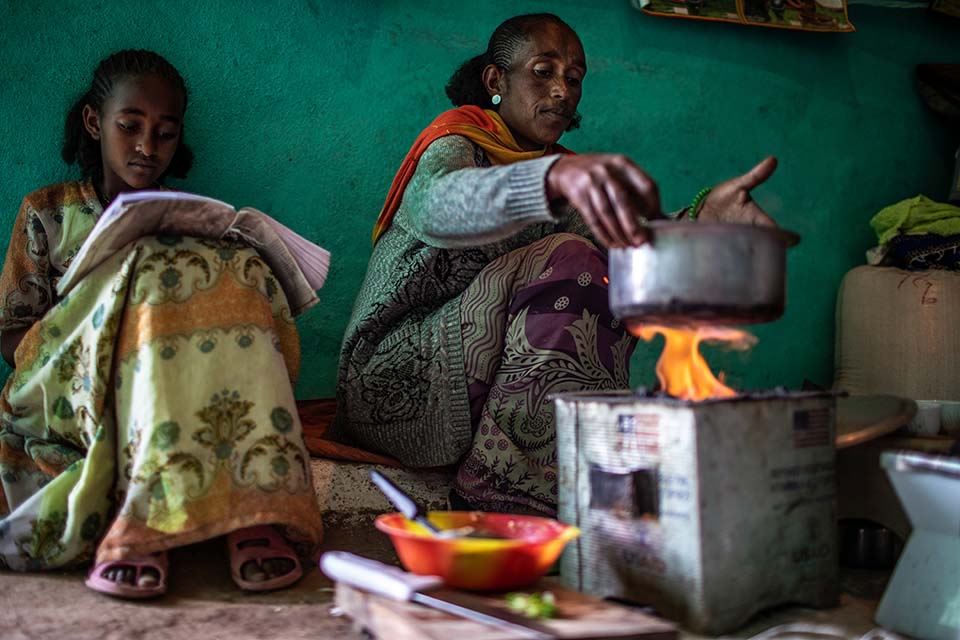 In rural Ethiopia, the vicious cycle of droughts, unpredictable flooding and crop failures can leave families with little or nothing to eat—forcing them to sell their possessions, pull their children out of school or even migrate in search of work.

Food distributed through JEOP—or the Joint Emergency Operation Program—is funded by the U.S. Agency for International Development’s Office of Food for Peace and serves as a valuable lifeline for more than 1.6 million people in these times of need. 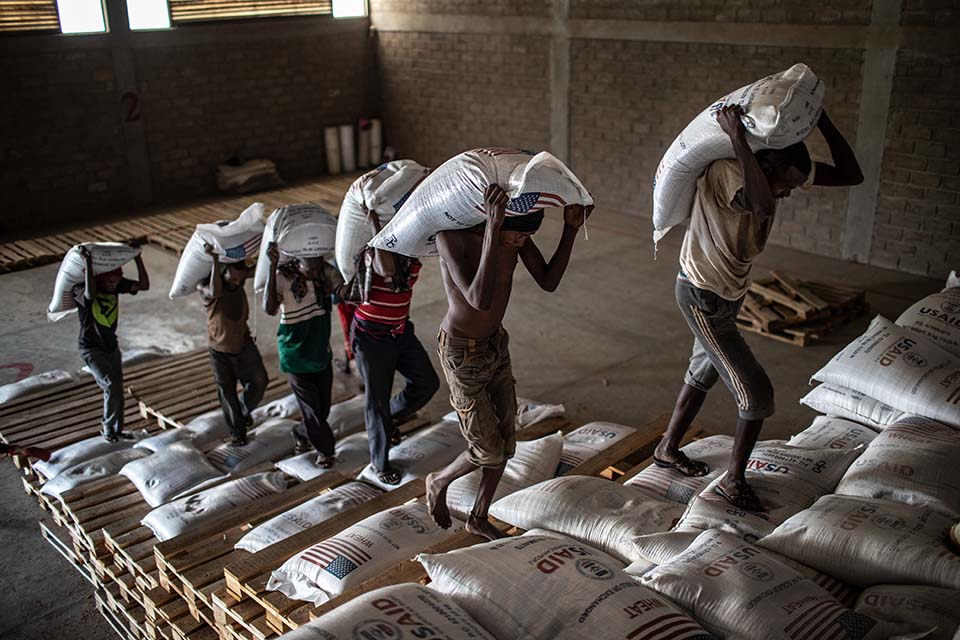 Laborers carry bags of wheat on to roof-high stacks at a warehouse operated by Ethiopia's National Disaster Risk Management Commission in Shinile, Ethiopia. The warehouse is used to store commodities distributed through the Joint Emergency Operation Program.

Led by Catholic Relief Services, a consortium of non-government organizations works hand-in-hand with the government of Ethiopia and community leaders to distribute wheat, yellow split peas and cooking oil in as much as 33% of drought- and emergency-affected areas of the country each year.

During each distribution, which takes place every 30-45 days during lean months, families supported by the program receive rations of 33 pounds of wheat, 3.3 pounds of split peas and a pound of vegetable oil per person in the home. Between January and August 2019 alone, CRS and its partners distributed 96,320 metric tons of food to people in drought- and emergency-affected areas of the country.

Since 2016, when CRS started using new technology to track food aid in Ethiopia, 99.99% of food distributed through JEOP has been accounted for and delivered to the families for which it is intended.

A scooper opens bags of wheat at a food distribution point in Hawzen district, Ethiopia.

“If people didn’t receive this aid they would have to migrate. It is safer for them to stay near their homes. If they leave, they will face additional hardships,” says Birtukan Gedefaw, a storekeeper with CRS partner Food for the Hungry.

“Now we are feeding our children three times a day. We are sending them to school. There is a real difference,” says Birhan. 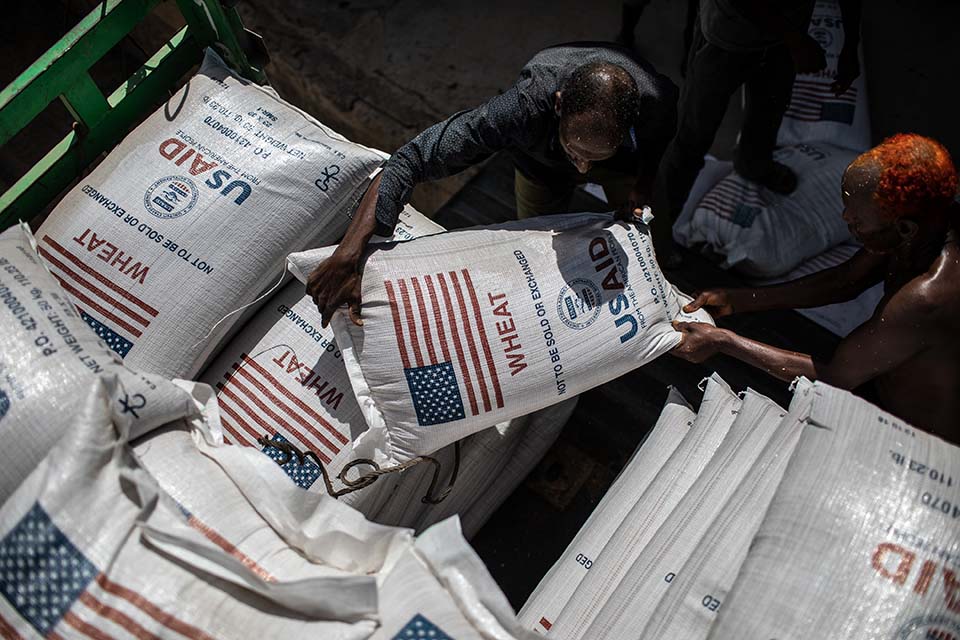 CRS also helps people to hold onto their hard-earned possessions. Birhan has a cow and a calf, but initially worried she would have to sell both.

“I would automatically sell the cows because I would not be able to feed them,” she says. Worse still, if she sold them at loss, she might find herself in debt. “I bought these cows with a loan from the local credit institution, so I would not even be able to pay back the loan.”

Like Birhan, Febedu Mehari has been able to keep her livestock because a significant portion of her family’s food needs are met by program rations.

“Before, we were selling our hens, milk, and goats. Now, because JEOP is supporting us, I don’t need to sell animals or our other assets to buy food,” says Febedu, who also lives in the Tigray region. “We can survive because we can produce hens, sell eggs, have cows and get milk. So there is no need to migrate to another place.” 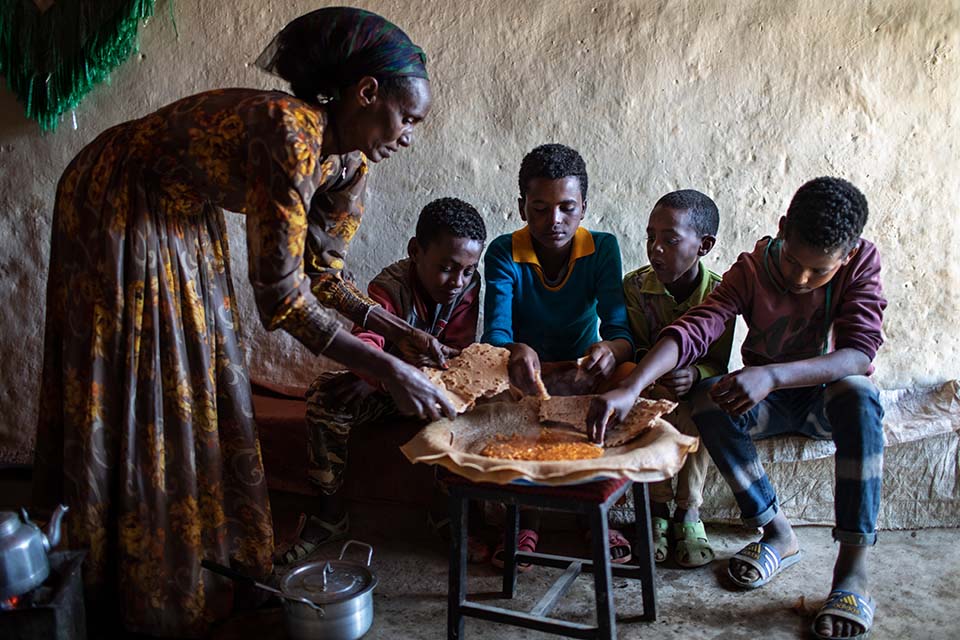 Febedu Mehari serves a meal of injera and a yellow split pea dish to her children in Hadush Emba, Ethiopia.

Orchestrating a massive, timely response during an emergency food shortage requires expertise in areas such as logistics, coordination and monitoring, as well as strong relationships.

Support Food Security and Farming Around the World

Information about CRS' response to the coronavirus. (Updated June 18, 2020) END_OF_DOCUMENT_TOKEN_TO_BE_REPLACED

A prayer for all those who are experiencing the devastation of Cyclone Fani in Eastern India (... END_OF_DOCUMENT_TOKEN_TO_BE_REPLACED