Through the narrow openings that weave in and around the potatoes, beans, sesame, banana, corn, yams and cassava on her farm in central Nigeria, Mwuese Jato introduces her latest crop with particular pride: "TME 419!" 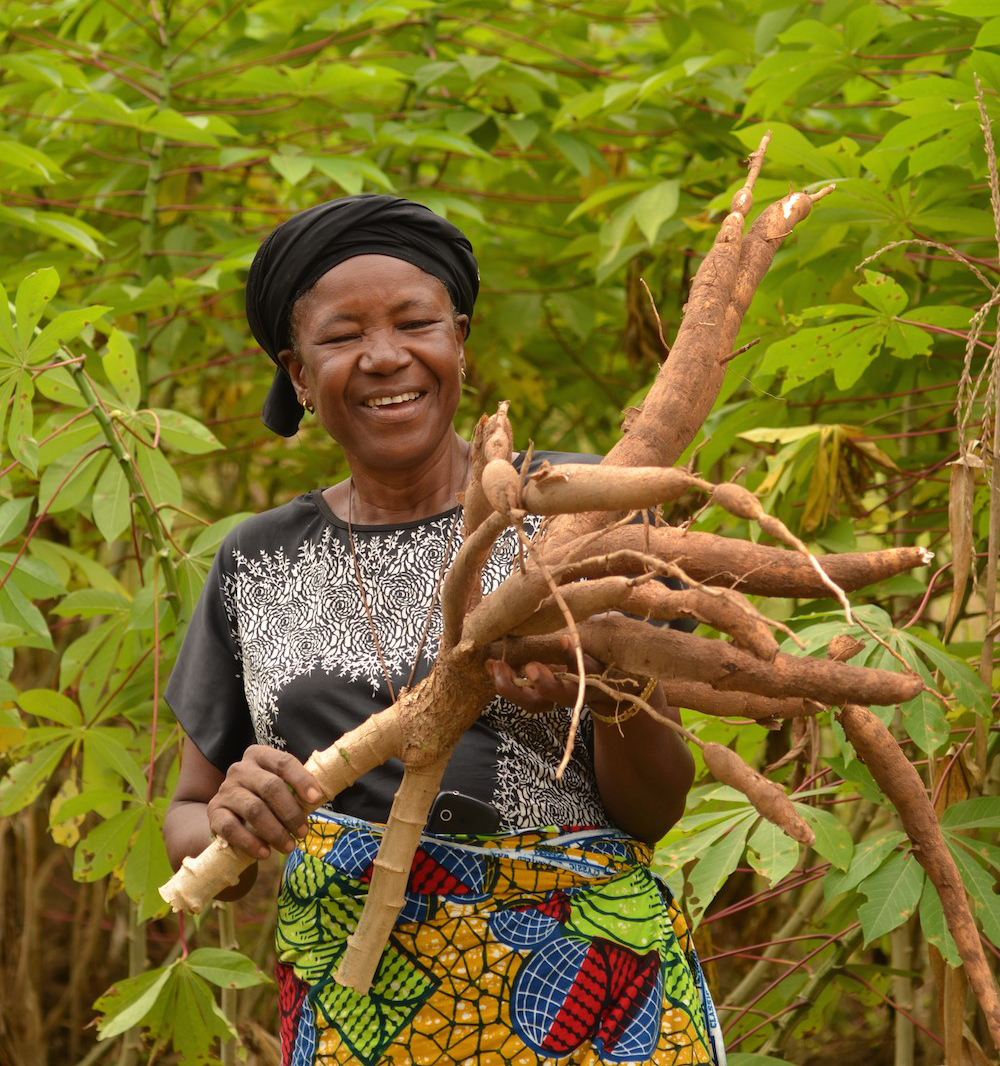 CRS helps Mwuese Jato produce and sell a new variety of cassava plants. She also participates in financial management training. With the income she earned from her last harvest, Mwuese supports her family. Photo by Michael Stulman/CRS

To the untrained eye, it looks like just another batch of cassava, a staple that millions of people depend on for food and income in Nigeria—and throughout Africa.

However, farmers who depend on the local cassava variety often struggle as low yields, fluctuating demand and marketing problems reduce their income.

"This is the new variety," explains Mwuese. "With TME 419, I'll produce more than three times as much cassava compared to the local variety," she says as she points toward the ground, where just below the surface the cassava root system grows. It's the part of the plant that is harvested and sold in local markets. But much of her income will come from the stems of TME 419 as well, which she will sell to farmers who want to plant the new variety in their fields.

Mwuese, a widow who heads a 14-member household, is one of more than 50 "seed entrepreneurs" participating in a 4-year Catholic Relief Services pilot project called Sustainable Cassava Seed Systems. With support from the Bill and Melinda Gates Foundation, CRS and our local partners are helping improve the cassava farmers' productivity and profitability. Seed entrepreneurs receive TME 419 cassava, along with practical advice how to grow, sell and track their earnings.

"Usually farmers give away their stems after a harvest, but people have seen how the new variety of cassava is better," Mwuese says. "Now people come to my farm, and they want to buy my stems."

Cassava is an important crop for two reasons: It is drought-resistant and it's available all year, so it can mitigate food shortages. Mwuese says she first heard about the new variety during a local demonstration sponsored by CRS. "I was convinced it would help me. When I harvest next year, I will do well," she says.

Approximately 4,000 farmers have participated in 20 farmer field days that promoted new varieties of cassava and taught best farming practices, including fertilizer and herbicide use. 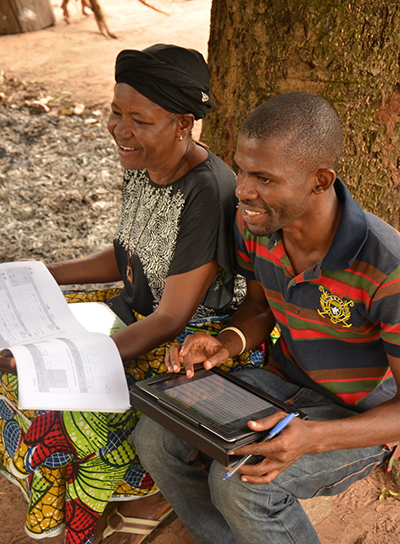 An app helps CRS collect and analyze information rapidly and efficiently from cassava farmers like Mwese Jato. The goal is to document progress and improve services. Photo by Michael Stulman/CRS

However, Mwuese and her neighbors need support to grow from subsistence farmers to agricultural entrepreneurs so they can sustain new farming practices.

A bad harvest can force farmers to sell their livestock, pull their children from school because they can't afford school fees, or take on debt that will burden their families for years.

CRS is building a network of dozens of local partners in Nigeria. This network is helping create a commercial and sustainable cassava seed system. Scientists provide advice based on sound evidence and extensive research. And with strong relationships in the farming communities, Catholic partners are trusted advisors. We leverage skills and knowledge so small-scale farmers can produce, market and sell cassava and its stems profitably. This helps farmers earn enough to sustain their families through a difficult growing season.

Potential to scale up 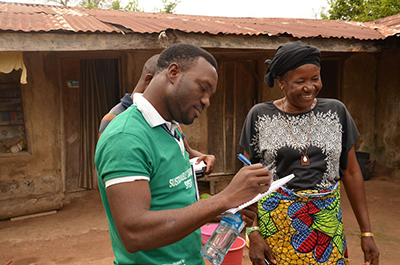 Segun Owoyermi, CRS program manager for the Sustainable Cassava Seed System project in Nigeria, works with Mwuese Jato, a farmer and a widow who heads a 14-member household. Photo by Michael Stulman/CRS

She has sold more than 2,800 cassava stems, earning around $750 during the last harvest. Mwuese has reinvested some of the proceeds in her farm, which will pay dividends during the next harvest. And she has extra money to support her family and community.

Mwuese is one of more than 1,000 farmers who have bought 60,000 cassava stems. As demand for the stems grows, the CRS model is designed to scale up and be adopted for nationwide use, giving entrepreneurs the potential to become an engine of economic growth in Nigeria.

Pray and reflect with your community on our call to respond to the needs of our sisters and... END_OF_DOCUMENT_TOKEN_TO_BE_REPLACED

Reflect on the impact climate change has had on our planet and pray for the Holy Spirit to change... END_OF_DOCUMENT_TOKEN_TO_BE_REPLACED

August recess is a key moment to meet with your members of Congress while they are out of session... END_OF_DOCUMENT_TOKEN_TO_BE_REPLACED