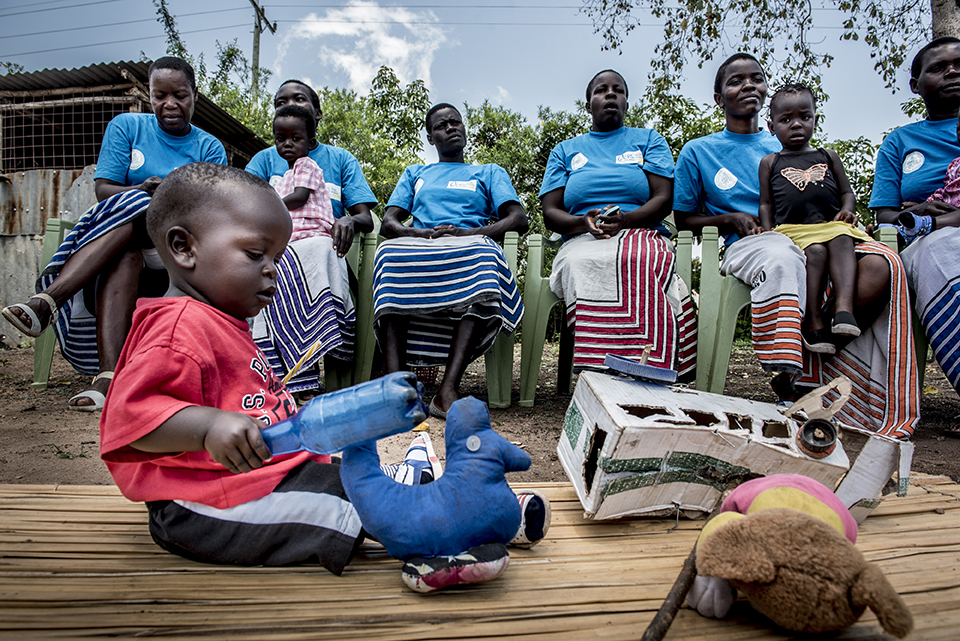 Members of the Joyful Ladies care group meet at one of their twice-monthly sessions to learn about early childhood development and positive parenting. Photo by Karen Kasmauski for CRS

Along the shores of Lake Victoria, in Western Kenya, new and expecting mothers are coming together to give their children a better start in life.

Women here typically marry very young, and tradition dictates that they live with their husband’s family. A new wife often cares not only for her children, but for her husband and in-laws as well.

“No one ever tells you how hard it is to give birth and become a mother, and to live a married life with your husband and new family,” says Grace Okiki, who volunteers for a local care group in the village of Kaluoch. “It can be so hard. And you’re so young.”

Grace’s care group is supported by Catholic Relief Services through the Conrad N. Hilton Foundation-funded THRIVE II program. The groups help mothers teach fellow mothers key principles, like how a child develops in the womb, how to play with a newborn, how to stimulate young minds and how to nourish growing babies.

As with other groups, the care group that Grace leads comes together for twice-monthly lessons. In the ensuing weeks, Grace makes house calls to the women in her group to talk about what they learned in class. She checks to see if they are having any difficulty implementing the lessons at home and, if so, she discusses how progress can be improved.

A house visit provides a much-needed respite in a mother’s daily routine. Research—conducted during the first phase of THRIVE in Kenya—discovered that 68% of new and expecting mothers suffered from symptoms of depression and low social support. The visits help reinforce lessons learned, but they also create opportunities for women to talk and share with others. This has proven to be completely novel in a culture where people don’t talk much about their emotions.

“This project has given us the possibility and the permission to get together as women, and to express our feelings. We have a group of women who support one another, instead of staying on their own and keeping everything locked up inside,” Grace says.

Rosemar Odhiambo, a mother Grace visits, agrees. “Of course, it’s really hard to come live with a new family and leave your own, but that is just the way it is in Luo culture. It’s frowned upon to keep the links with your own family.” 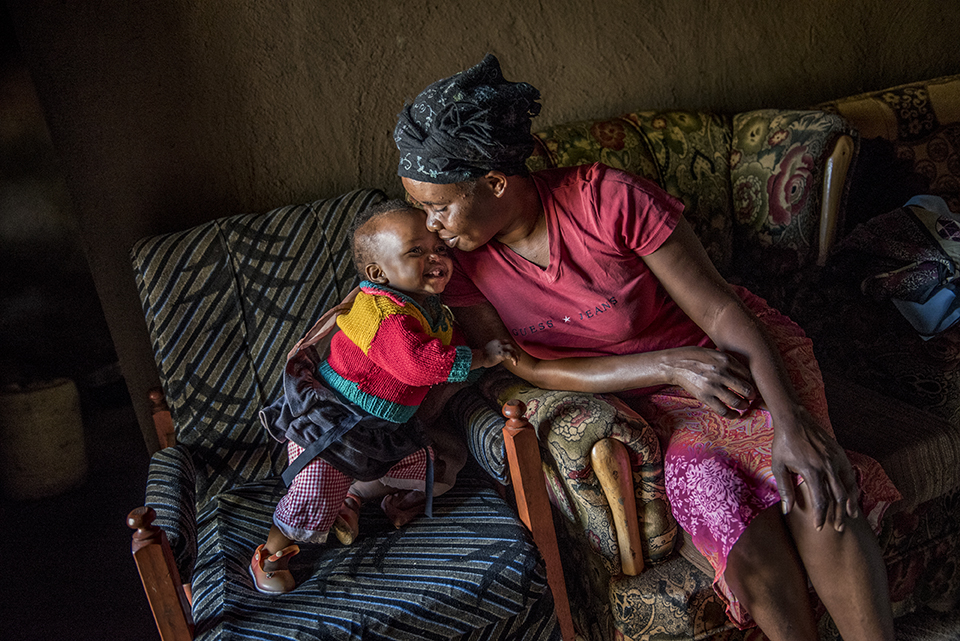 In the village of Kuloch, Rosemary Odhiambo nuzzles with her baby. She and her husband Patrick try to adhere to the principles Rosemary learned at her THRIVE meetings. Photo by Karen Kasmauski for CRS

As it would for most families, stress can take hold—especially when a married couple only makes a few dollars a day, and there are many mouths to feed. In home after home across the region, there is a common thread to every family’s story: They’re constantly worried about money, barely scraping by. Ensuring their children eat well and have their school fees paid weighs heavily on mothers and fathers.

Rosemary’s husband, Patrick, is a relatively successful fisherman in a village where many struggle and fishing is one of the only jobs available.

“There are two main sources of stress for me. The first is money. If the catch from the lake isn’t good, we can’t make ends meet,” he says.

“The second is if we spend money on school fees, and then maybe one of the children doesn’t perform at school … We struggle so hard to pay the fees,” Patrick says.

When Rosemary started attending THRIVE’s Mother and Baby Course, she began making changes around the house and in the way she cared for the children. So Patrick wanted to join the group too.

“My wife told me it’s only for women,” he says with a chuckle. Still, he readily adopts the new ideas and practices she brings home. 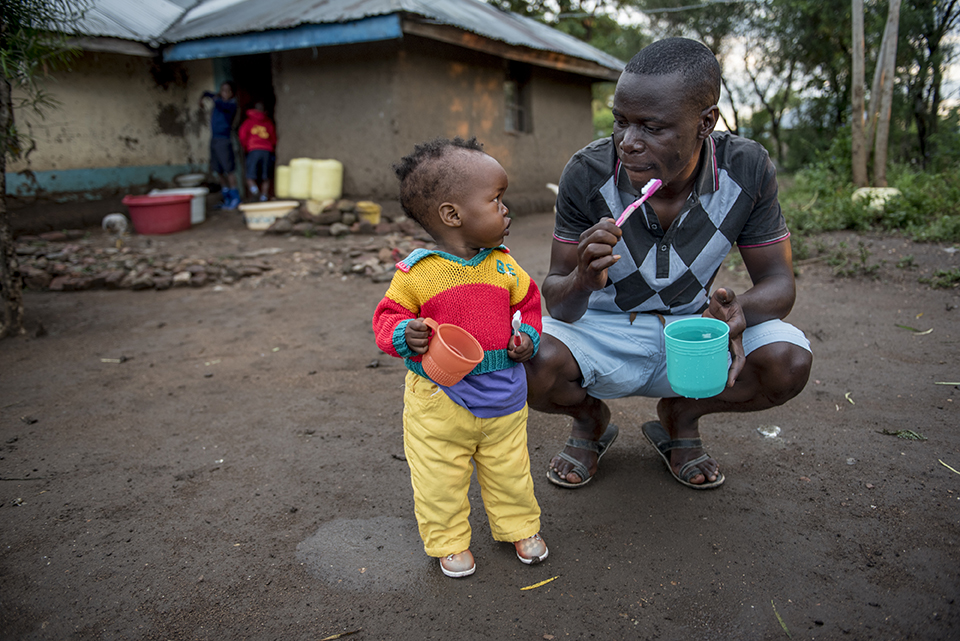 Patrick Odhiambo helps his daughter, Aggy, brush her teeth outside their home. He took on additional parenting responsibilities after his wife enrolled in the THRIVE Mothers and Babies Course. Photo by Karen Kasmauski for CRS

Embracing the role of fatherhood

Patrick, whose own mother died young, was accustomed to helping his father with “women’s work” from an early age. He would fetch water, collect firewood, cook the staple food, ugali, do the laundry—and the list goes on. He now helps Rosemary with the housework whenever he can. In fact, his youngest child, Aggy, is glued to his side or in his arms whenever he is home. He plays with Aggy while Rosemary cooks her porridge, or while she prepares their two boys for school. Junior is just 6 and Fidel is 5, so with Aggy, just over 1, it certainly makes for a lot of work.

“I used to go out for drinks with the guys after work,” says Patrick. “But now I realize it’s not very fair to Rosemary to leave her at home to do everything. She is working too. Now I come home, so I can give her a rest.”

A baby gets a vaccine from Nurse Susan Okuku at the Otiti Village health facility in Kenya. Photo by Karen Kasmauski for CRS

Grace says there’s been another important change too: Women are now visiting their doctors as soon as they know they are pregnant. HIV rates for adults in the region stubbornly remain as high as 26%, so early detection and proper prenatal care can help prevent transmission from mother to child.

THRIVE mothers know—and want—to go to their medical facility early. “And now we know to bring our children for regular check-ups, even if they aren’t sick,” Grace says. “My own girl, Esther, is 9 months old, and she has never missed a check-up.”

When mothers visit health clinics for pre- and postnatal care, or parenting classes, their children can play while they wait. Susan Okuku, a nurse at one of the clinics supported by the program in Migori County, says the children respond to their locally-made toys. Rattles, for example, are made from bottlecaps strung together with wire from a clothes hanger.

“If we see a child isn’t responding, for example, to sound from the rattle, or another source of stimulation, then it might be an indicator something is wrong,” Susan says.

“If there are indicators a child is missing a developmental milestone, we’ll see that, and we can refer the child for further care.”

HIV can cause significant delays in development. And it has also been shown that even for children who are not personally infected, if they are affected by the virus—such as by the loss of a mother—they too have delays in motor and language function. Robust early childhood development programs are one of the best opportunities to support children already starting out one step behind. THRIVE helps level the playing field, so all children can grow to achieve their full potential.

We seek daily renewal from the source of all life, and so we pray ... END_OF_DOCUMENT_TOKEN_TO_BE_REPLACED

Our walk with God is reflected in our walk with others, and so we pray ... END_OF_DOCUMENT_TOKEN_TO_BE_REPLACED