Lena Munezero had many good reasons not to trust people. 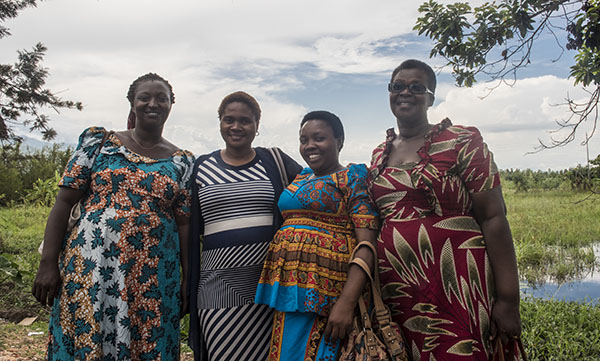 Cross-border women traders in Burundi, Rwanda and the DRC are working together to promote peace in the region. Photo by Michael Stulman/CRS

“My father and brother were killed in conflict, and my mom always told me to be careful—that I shouldn’t collaborate with certain people,” she says, speaking in Bujumbura, Burundi’s capital city.

But, as a cross-border trader, Lena knew she had to learn trust if she was going to effectively collaborate with the different types of people she encountered every day: government officials at the border and traders from Burundi and neighboring countries.

The project provides them with an opportunity to build relationships and promote conflict transformation in their lives, communities and governments.

“I was living with prejudice, and this was blocking my full potential—both in terms of entrepreneurship and personal relationships,” Lena says.

She knew she needed true healing to build the relationships required for her business to be successful. She needed to help promote peace and economic development.

She wasn’t the only one. Burundi and the surrounding countries in the Great Lakes Region of Central Africa have seen more than their share of violence in the past 2 decades. Starting with the Rwandan genocide in 1994, every country in the region has suffered from war and displacement.

Fidelie Bivugire, an artisan and widow, lived through Burundi’s ethnic conflict in 1993. Now she supports her two children by selling crafts at a local market.

“When I initially started participating in the meetings, it was difficult,” she says of COSOPAX. “But I got something that I was not expecting. There was a personal transformation. It was a progressive transformation.”

Fidelie was able to talk about the trauma of 1993 with other survivors, including perpetrators of the conflict.

“As we talked, I realized it was not only about me,” she says. “I realized we had the same problem. The meeting facilitators shared information on how to forgive, and slowly, I could share the same room. We even shared meals together.” 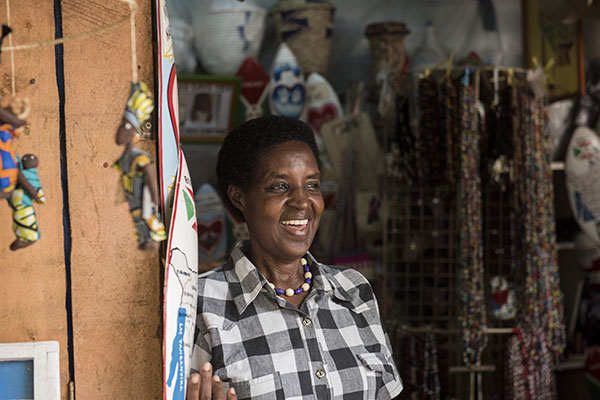 Complicating the situation, there are many refugees who come through the region, as well as the business challenges small entrepreneurs face. COSOPAX helps with such challenges.

“With the movement of refugees, you have many stereotypes,” says Monsignor Anatole Ruberinyange. “There was a big distance between people. There was no cohesion between refugees and host communities. We saw this in families, communities and the region overall.”

As refugees move across borders, they can put a strain on limited resources, like clean water, housing, employment or land. This can give rise to economic competition, which can lead to frustration and discrimination. The tension is only increased by differences in religion, culture and social norms.

COSOPAX women — as they proudly identify themselves — learn to acknowledge, critically examine and challenge their own prejudices. This helps them transform potential conflict, beginning at the interpersonal level and within their own lives. Then they can contribute to, and advocate for, similar transformation in their families, friends and neighbors.

COSOPAX women also reinforce relationships through business collaborations and by sharing new business opportunities, which expands their work and advocacy.

“With COSOPAX, there is a spirit of compassion. From one diocese to the next, women are supporting each other,” says Monsignor Ruberinyange.

For these women, the day-to-day work as a cross-border trader isn’t easy. At the borders, traders like Lena and Fidelie might be subject to violence and abuse. Their goods could be confiscated, and they might be required pay fines for no apparent reason.

“There is a lot of risk,” says Esperance Nkurunziza, a customs official who works along the border of the DRC and Burundi. She visited a COSOPAX meeting to train the women on tax collection and other border procedures.

“Before there was fraud—going from one side of the border to the another, passing without paying,” Esperance says. “After the training, COSOPAX women started registering their goods on a regular basis. Now they contribute to the economy of our country, and there are fewer problems because they know what documentation is necessary.”

“We’re not afraid to cross the border. We’ve learned about payments and taxes. And it’s good to pay taxes to build things like schools and roads,” says Fidelie.

In addition, by forming Savings and Internal Lending Communities, or SILCs, COSOPAX women can fund their immediate and longer-term business needs.

“It was difficult for me to get a loan from the bank to expand my business. But now, there is SILC, and there’s no problem,” Fidele says. “Last year I got three loans.”

“What I’ve done in the last 3 years is more than the 40 years before that,” she says. “I want to build a house, and I think it will be possible, because of SILC.”

COSOPAX women have a big vision, well beyond the project CRS started.

Lena agrees. “We dream of becoming a strong, independent organization, where we can pay for CRS staff to attend our meetings and provide the trainings,” she says.

A prayer asking God to help us recognize family in each of His children, to know them as brothers... END_OF_DOCUMENT_TOKEN_TO_BE_REPLACED