7 Things You May Not Know About Human Trafficking, And 3 Ways To Help

“The trade in human beings, a modern form of slavery, … violates the God-given dignity of so many of our brothers and sisters and constitutes a true crime against humanity.”  —Pope Francis

You may not see the problem, but it’s there. The US State Department estimates there are 24.9 million human trafficking victims worldwide. This is not something that occurs only in dark alleys in the far corners of the Earth, though. It’s happening around the world every day.

Human trafficking is considered modern-day slavery, and there are more slaves today than at any time in history.

“They are hidden from view. You don't recognize them in the back kitchens, shops, gas stations and in hospitality. They are also tucked away in fields. They don't come out and ask for help. It’s a different kind of slavery than long ago,” says Dr. Lucy Steinitz, Catholic Relief Services senior technical advisor for protection. “They are not in shackles or on farms. People are coerced into harsh employment under horrible conditions, and then have no freedom to leave. They are beaten, violated and told they are worthless—that no one else wants them anymore.”

Here are 7 facts about human trafficking you may not know, plus 3 ways you can help.

There are 3 ways you can help stop human trafficking:

1. Purchase a Gift for Trafficking Survivors

After escape or rescue, trafficking survivors remain at great risk until they can re-establish their lives. CRS’ kits provide a month’s supply of food, medicine, bedding, clothing and hygiene items.

Give a Survivor's Kit for trafficked girls

Give a Welcome Kit

The best response to human trafficking is to prevent people from being trafficked in the first place. CRS’ work in agriculture and livelihoods, education, shelter, inclusive value chains, emergency response and recovery and other programming aims to help people prosper at home. Prosperity at home greatly reduces the false enticements of the trafficking trade.

Help where it's most needed

If you witness suspected human trafficking or other forms of exploitation, speak up. The United States Conference of Catholic Bishops has been a national leader in advocacy and education efforts related to sex and labor trafficking. These resources can help you take action if you believe there are human trafficking victims in your community. Human trafficking may be a crime against humanity, but as a human you can be the light. 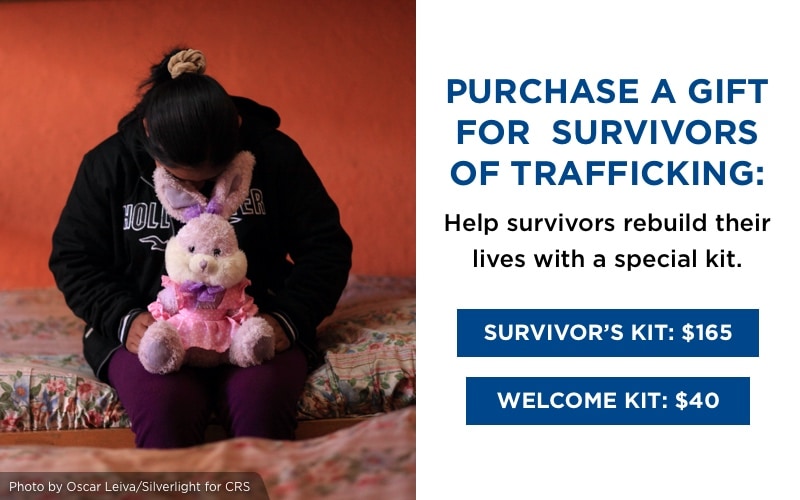 We seek daily renewal from the source of all life, and so we pray ... END_OF_DOCUMENT_TOKEN_TO_BE_REPLACED

Our walk with God is reflected in our walk with others, and so we pray ... END_OF_DOCUMENT_TOKEN_TO_BE_REPLACED