Standing Against Child Abuse in Lesotho

With recent large-scale studies, the scope of violence against children around the world has started to come into light. The Coordinating comprehensive Care for Children project (4Children) is strengthening social systems to sustainably prevent and respond to child abuse and neglect. But as this story from the 4Children project in Lesotho illustrates, the best response can come by empowering children themselves.

"Children have the right to be heard.”

In Thabana Tsoona, a large rural village in Lesotho, 4Children is mobilizing adolescent girls and young women into groups to be trained on how to save money, build their social assets, and protect themselves from HIV.  In this village where children travel long distances to school and it is normal for girls leave school and marry young, the groups are very popular with both the parents and the girls.

In one group, a student leader noticed that one of the 17-year-old participants had stopped attending sessions.  The leader followed-up with the girl, who burst into tears and told the leader that her father had forbidden her to attend.  The leader took further initiative and visited the girl’s parents to encourage them to allow her to attend the sessions, but the father became furious and told her to stop interfering in family affairs. 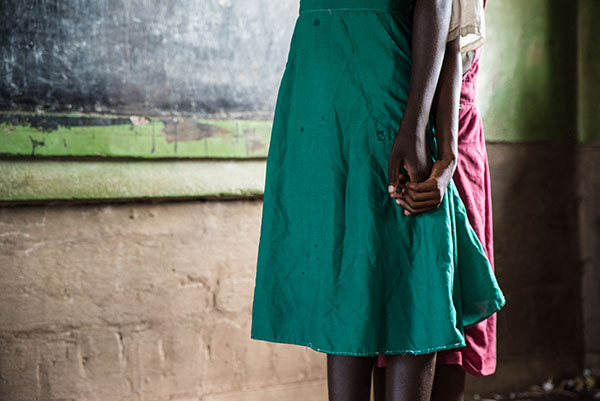 4Children is empowering young women to stand together against violence and abuse. Photo by Lauren Carroll/CRS

But the isolation and control of the father went well beyond just the girl’s group participation.  His drunken abuse of the girl was well known in the community, but no one wanted to make it their business.

The young women, empowered by their training on their rights and self-esteem, went to the local chief to ask for his help with the girl. He turned them away and even some of the parents warned their children not to get involved. But the young women would not give in.

“How can we stop standing up for what we believe in and for what is right?” they asked.

They continued seeking help and called on a community lawyer who was impressed by their bravery and agreed to intervene. Aided by this new advocate, the young women's persistence and compassion paid off. The young woman has found a safer home situation.

“The sad fact is that children are doing more than adults to fight for their own rights,” she said. “It is always considered disrespectful not to see eye to eye with the elders, but this group has taught me that change is never made by accepting what society says is normal and children have the right to be heard.”

This project is made possible by the generous support of the American people through the United States President’s Emergency Plan for AIDS Relief (PEPFAR) and the United States Agency for International Development (USAID) under cooperative agreement AID-OAA-A-14-00061. The story contents are the responsibility of 4Children and do not necessarily reflect the views of USAID or the United States Government