She is now Saint Teresa, but for most of us, she will forever be Mother. 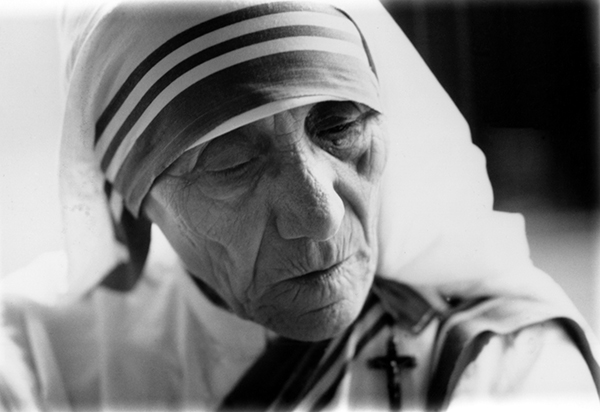 Mother Teresa came to the attention of Monsignor Alfred Schneider not long after he arrived in India in 1955. Relocated from Germany, he was there to set up initial programs in India and Pakistan for the newly named Catholic Relief Services.

In Calcutta, he heard of a religious sister who was working in the slums, then met her while visiting a school CRS was supporting. He wrote of seeing Mother Teresa that first time: “Christ was in her face—in her shining eyes, in the lines of patience and laughter around her mouth, in the ineffable glow of love which surrounded her.”

Father Al, as Monsignor Schneider was known, visited the empty warehouses that Mother Teresa’s Missionaries of Charity had turned into the Home for the Dying, filled with the desperately ill picked up off the streets. Frankly, he was appalled. “It was the most depressing place I ever saw in the world,” he later wrote.

But looking past the filth, disease and death, he recognized that at the core of Mother Teresa’s work was an affirmation of the dignity and worth of every individual, even these who had been discarded by society and left to die on the streets.

“I came away impressed beyond words with her courage and commitment,” Father Al wrote. “The very horror of the Home for the Dying made the effort all the more beautiful.” 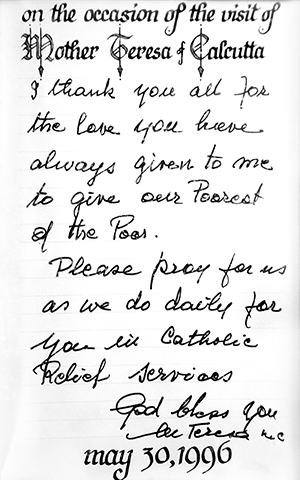 Dignity for all human life was at the heart of CRS’ mission as well, so it was no surprise that CRS and Mother Teresa began working together. Father Al personally arranged funding for Mother Teresa’s first ambulance, and he wrote of her charitable work in the publication of the National Catholic Welfare Council–then the umbrella organization that included CRS. This led to Mother’s Teresa’s invitation to the United States to address the National Council of Catholic Women, the first international publicity her work received.

CRS continued to support the Missionaries of Charity even as Mother Teresa’s fame grew—and we do to this day.

Jim De Harpporte, now CRS’ Western regional director based in California, who ran CRS programs in India in the 1970s, said that Mother Teresa knew how to use her fame. He recalled once asking for her help in getting a shipment of food released that had been tied up in the port for weeks. Mother Teresa accompanied him to a meeting with port authorities and the red tape disappeared. After De Harpporte thanked her, she said with a small smile, “Sometimes it helps to be Mother Teresa.”

“She wasn’t someone to just send people to do it, she was the doer herself,” Callahan said.

Callahan had to leave India due to illness and it was partly out of concern for him that, on a visit to the United States in 1996, this then-Nobel laureate insisted on changing her carefully scheduled trip to include a visit to CRS Baltimore headquarters. Her presence would have been inspirational enough, but she took the time to personally greet every staff member who turned out to see her.

Before leaving, she left a handwritten message that is now framed on our lobby wall: “I thank you for all the love you have given me to give to the poorest of the poor. Please pray for us as we do daily for you in Catholic Relief Services.”

She is indeed Saint Teresa of Calcutta, but at CRS she will always be our mother, Teresa.

We seek daily renewal from the source of all life, and so we pray ... END_OF_DOCUMENT_TOKEN_TO_BE_REPLACED

Our walk with God is reflected in our walk with others, and so we pray ... END_OF_DOCUMENT_TOKEN_TO_BE_REPLACED