One thousand people pull up weeds, clear brush and flatten the soil along a 6-mile stretch of land on the outskirts of Bor, a town in Jonglei State in South Sudan. They say they're building a road, but what they're really building is a nation.

Shoulder to shoulder, residents of nearby communities in this country in east-central Africa begin as strangers and end as friends. As they remove weeds and uproot trees, they are paving a way to possibilities by 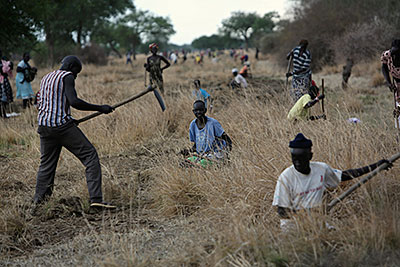 Residents from the village of Manydeng in South Sudan clear land to prepare for road construction. They are part of a CRS-led program that pays them in food for work building critical infrastructure in their new nation. Photo by Sara A. Fajardo/CRS
providing access to markets and medicines. They also are creating a clear field of vision that will prevent attackers from hiding and enable authorities to patrol more easily.

The men move the trees from the road and chop them to pieces while women like Mary Ngok carry away the debris.

"Last year, there were floods," says Mary. "Our crops were lost. My farm only produced one bag of sorghum. In a good year, it produces five."

With minimal access to markets, and land so muddy that vehicles carrying food could get stuck, the fear of hunger set in.

Mary's village, Makol Cuei, turned to the Catholic Relief Services-led Jonglei Food Security program for assistance. Generously funded by the American people through the U.S. Agency for International Development Food For Peace program, the Jonglei program helps communities build infrastructure in exchange for payment in food. Each village builds what it determines is most needed to help prevent future bouts of hunger. Some flood-prone villages located on the banks of the Nile have chosen to build dikes, and others have dug fishponds. In the case of Makol Cuei, the villagers opted for building a road last year and decided to extend it this year.

During dry seasons, the people of Makol Cuei clear the road; in rainy seasons, when the soil is easier to mold, they level and raise the roadbed. A South Sudanese government official oversees the work and inspects the completed road to make sure it meets local road construction standards. For 20 days of work, a person receives 110 pounds of sorghum, 50 pounds of yellow split peas, a pound of salt and almost a gallon of oil—enough food to feed a family of five for a full month.

The Jonglei Food Security program "helps because we are able to decide what will help our village and get paid in food for our construction," says Mary. "This month, no one will speak of hunger. My family would have been suffering…if it had not been for the [program], which brought the jobs to us."

Working Themselves Out of Dependency 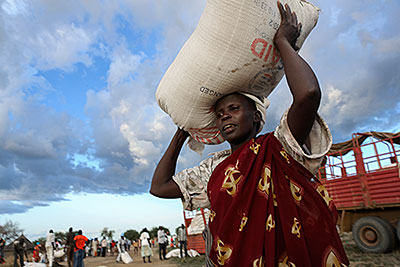 A woman in Makol Cuei, South Sudan, balances a 110-pound bag of sorghum she received as payment for 20 days of road construction. Photo by Sara A. Fajardo/CRS
It's been 2 years since the South Sudanese voted their way to independence and became the world's newest country. They took on self-rule, and added a new flag and anthem. They inherited a bare-bones infrastructure stagnated by conflict and a war-weary psyche that isolated communities and left much of the population completely dependent on foreign assistance.

If one were to look solely at the statistics—ongoing conflict, low literacy rates, less than a hundred miles of paved roads, children dying from easily treatable conditions like diarrhea—one might say that South Sudan is a land without hope. It would be easy to overlook South Sudan's greatest asset: the people, who are willing, able and determined to build a future if only given the tools with which to do it.

A first step is getting people scattered by war to learn how to work together again.

"When people came back from the war, they settled back into the villages they knew, but the larger communal groups had been lost," says Brigid O'Connor, team leader for the Jonglei Food Security program. "Trying to create an economy after the war means that you have to bring people back into bigger groups and associations. The individual farmer and the individual village need to link up to something bigger so that they can produce in large quantities."

People must shift from receiving free food in displacement camps to providing for themselves. The Jonglei program is tailored to help. Often employing up to 1,000 people at a time, the communal experience of building roads does more than link communities; it teaches people they are capable of overcoming challenges as a group. The food received in exchange for that work offers an additional cushion against hunger until the people of Jonglei can build the necessary infrastructure to create that cushion for themselves.

'One Hand Cannot Clap by Itself' 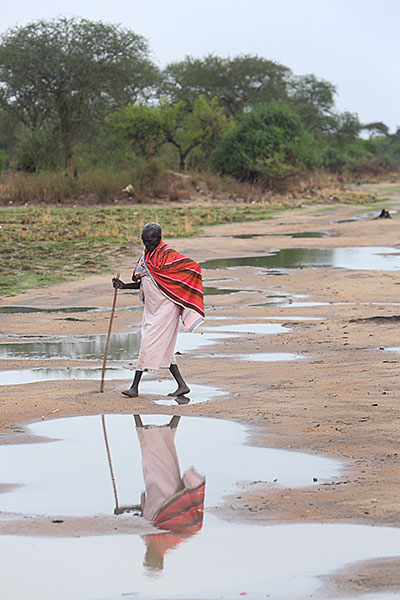 A woman walks along a finished road outside of the village of Makol Cuei in South Sudan. Roads provide access to markets and other villages, and offer safety from attackers. Photo by Sara A. Fajardo/CRS
Nearly 600 people mill around Makol Cuei's newly built road. Someone opens a small rope gate to allow two large semitrailers laden with food to enter. The villagers are fiercely protective of their roads, reserving them for foot and small vehicle traffic. They minimize use by heavier vehicles because, during the rainy season, those vehicles destroy the clay soil and render the road impassable.

When the food arrives, CRS staff work with members of the village's project implementation team to organize the distribution.

Sitting on large cans of oil and using large cardboard boxes of food as makeshift desks, the crew calls each villager to come sign for his or her food. Low literacy rates mean most people sign their names with a fingerprint. Although many of them can't read, they know what they can accomplish and have the math skills to calculate exactly how they'll stretch the food they're receiving in the months to come.

It's a challenge to walk with 110 pounds of sorghum. All along the road, women drag the bags behind them. Others enlist a friend and juggle the weight between them. And some, like Mary, carefully balance the bag on their heads.

A few miles away, Manyang Kuol, a project implementation team leader, agrees. His village built a dike last year to prevent flooding. This year, they've decided they needed a road to help get medicines to their health clinic.

"People benefit from roads like the ones we are building," Manyang says. "When we have a dike, it prevents floods and we can raise more goats and sheep, which we can sell. When we have no floods, crops produce. This is helping bridge the gap between the rich, the poor and the hungry."

Throughout the state, the Jonglei State Food Security program will continue helping the South Sudanese forge their future—one road, one dike and one fishpond at a time.

A prayer asking God to help us recognize family in each of His children, to know them as brothers... END_OF_DOCUMENT_TOKEN_TO_BE_REPLACED