A two-year-long drought, coupled with conflict, violence and a sharp increase in food prices have pushed Somalia into a state of severe crisis.

Nearly 3 million people have been displaced, and nearly half of Somalia’s population of 15 million need humanitarian assistance. An estimated 1.4 million children under the age of 5 face severe malnutrition as southern Somalia has witnessed a drastic rise in child and adult deaths. 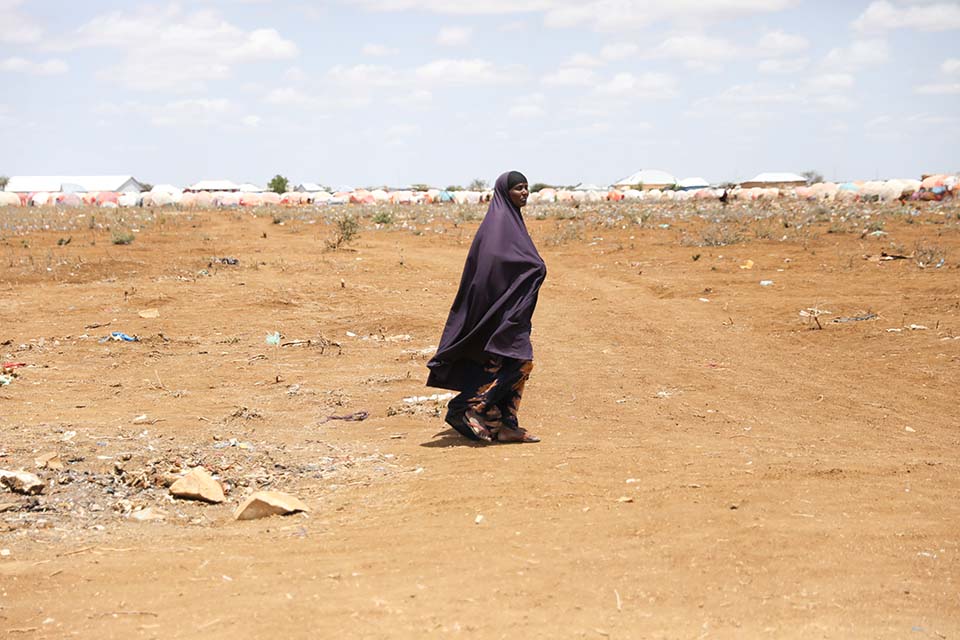 A woman walks toward her tent in a settlement for displaced persons in Baidoa, Somalia.

“The situation is grim,” says Angela Muathe, a communications manager for CRS in Kenya and Somalia. “There is a need for a huge response to provide food, cash, water and sanitation services. Catholic Relief Services is already working to provide water, sanitation and hygiene services but the needs are immense. Displaced people are coming into camps every day and there is so much more needed.”

Somalia, where most people earn a living from agriculture and livestock herding, has experienced four consecutive failed rainy seasons—with a fifth underway. As pasturelands wither, communities are losing livestock. Crops are failing due to a lack of rain. Families are leaving their homes and communities, migrating in search of food and water for their children.

Fadumo Hudow Ibrahim fled southwest Somalia after she lost her farm and livestock to the drought. "We did not receive rain for a long time. All our animals were wiped out, and we cannot even grow crops. All these tragedies forced us to move here,” she says. After traveling three days to reach the outskirts of Mogadishu, she and her family now live in a makeshift shelter. 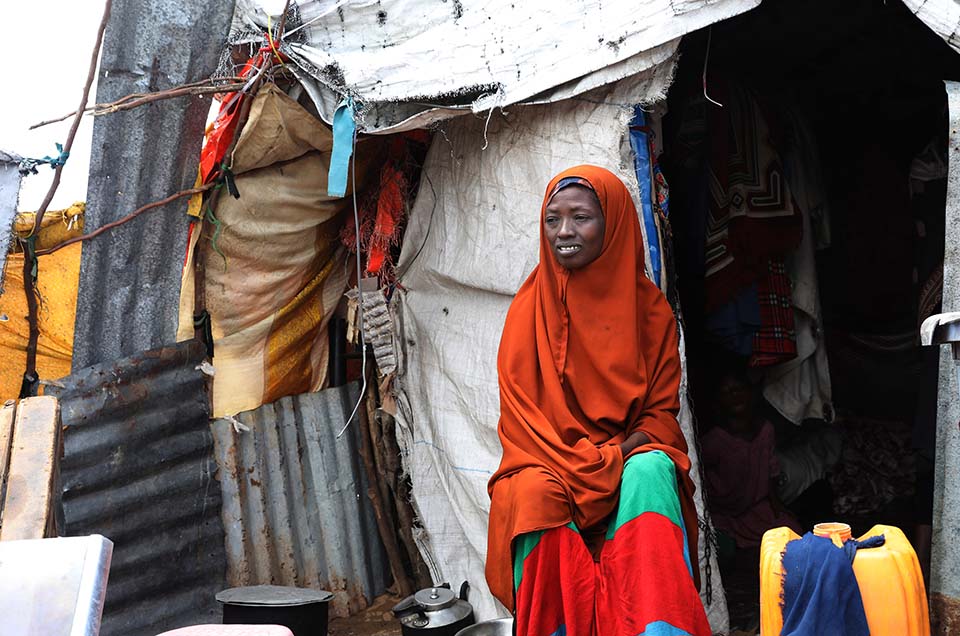 Fadumo Huudow Ibrahim, mother of eight, sits in front of her makeshift tent at a camp for internally displaced people on the outskirts of Mogadishu, Somalia. Fadumo and another 275 families at the camp fled from the Bay region in southwestern Somalia, the center of drought-hit areas in the country.

According to the most recent assessment by the United Nations, at least 40% of Somalia's population will experience severe food insecurity between now and December. If lifesaving aid is not critically ramped up, famine is expected to be declared in several districts within the next few weeks.

The stark reality of ongoing hunger can be seen in the Baidoa District Hospital, where mothers hold their children and line up as they wait for them to be examined.

"The drought has taken a toll on us,” says Faiza Abdi Siyad, a mother with a severely malnourished child. “I brought [my daughter] here for treatment and medicine, and food was provided to her, and she has improved tremendously, and I thank them for that. She is now taking therapeutic food and medicine, and I thank God for the improvement."

The children could carry the health impact of these early childhood deficits for their entire lives. According to UNICEF, at least 330,000 children in Somalia need life-saving treatment for severe wasting, the deadliest form of malnutrition. 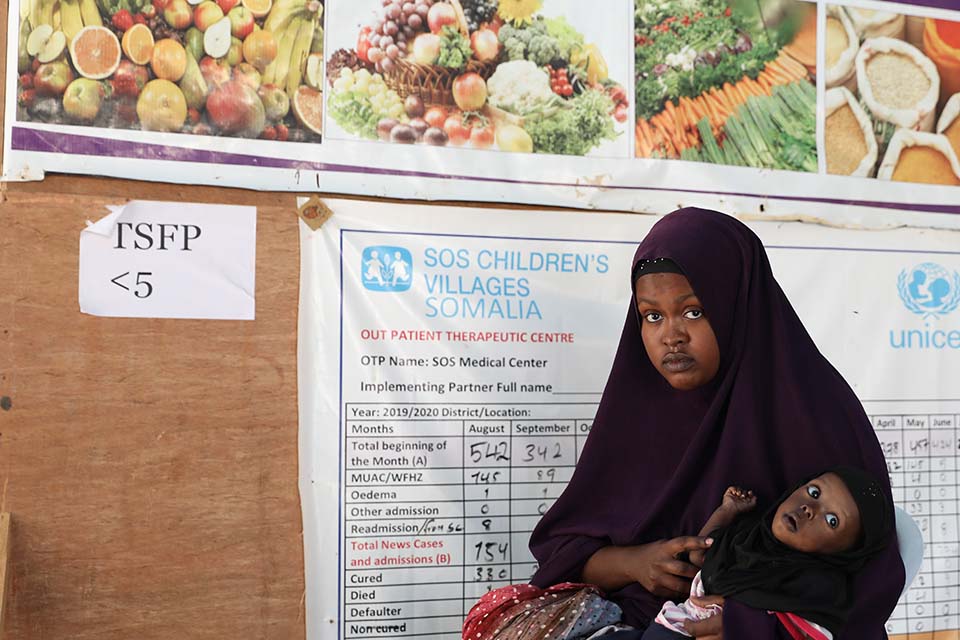 Faiza Abdi Siyad waits for her malnourished child to be examined at a health center in southwestern Somalia.

Mothers like Faiza bring their babies to hospitals in the main urban centers, hoping for treatment. At the Baidoa District Hospital, where CRS runs a nutrition project with one of our partners, new admissions of malnourished children has multiplied since May 2022. Angela reports real benefits for those who can get treatment.

“I met two children in the hospital who had been undergoing follow-up treatment from illnesses related to malnutrition and the hospital staff told me they were improving,” she says. Adults are also responding to treatment.

“At Baidoa hospital, I met a lady who was around 60,” Angela says. “She said the treatment had saved her life. She was extremely grateful to the medical staff. Without that treatment, she could not survive. The treatment provided to these people literally saves their lives.”

As drought ravages communities in Somalia, CRS has supported 70,000 people affected by the crisis with health care, nutrition services, cash assistance, clean water and hygiene supplies. We recognize the urgent need to avert famine and the devastation of livelihoods, and we prioritize localized cooperative approaches that enhance social cohesion and a community's ability to respond to future crises.

Learn more about food insecurity in Somalia and the Horn of Africa.

August recess is a key moment to meet with your members of Congress while they are out of session... END_OF_DOCUMENT_TOKEN_TO_BE_REPLACED

Use this calendar for key dates to reflect and take action with your community to address climate... END_OF_DOCUMENT_TOKEN_TO_BE_REPLACED