"Something exciting's happening at CRS," says Sandra Basgall, who turned 70 a few weeks ago.

Sandra's a Catholic Relief Services staff member who lives in Kinshasa, Democratic Republic of the Congo. To understand her excitement is to grasp the deep commitment she shares with CRS about using modern means to more effectively help people in dire need. 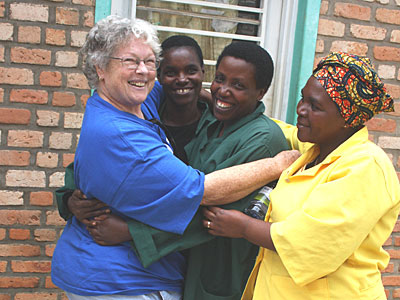 Sandra Basgall, left, a CRS advisor on monitoring and evaluation for Central Africa, hugs several partners, including a social worker and community health workers, in Rwanda. Photo by Kevin Kostic/CRS

She wanted a better way of tracking which beneficiaries were getting which service—whether it's food, seeds, tools, whatever. And then a serendipitous event changed everything.

"We used to look at data that's 6 months or a year old and say, 'Oh, if only I'd known this….' Well, now we can know, and we can plan our projects around that!"

Sandra believes firmly that CRS is a leader in the tech-meets-humanitarian world. It's the only organization to hold an annual global Information and Communications Technology for Development (ICT4D) conference—the fourth was held this year in Kigali, Rwanda. Sandra remembers the first one in Nairobi 3 years ago.

"The techies sat at one table and the development people sat at another. But then, slowly, they started talking to each other," she explains. "Right now, I feel as comfortable with the techies as they do with me. We now understand each other's roles and how to integrate them. In the past, we'd only call a techie if we had a problem with our computer or the internet, or if the mainframe was down. Now, they're an integral part of everything we're doing.' 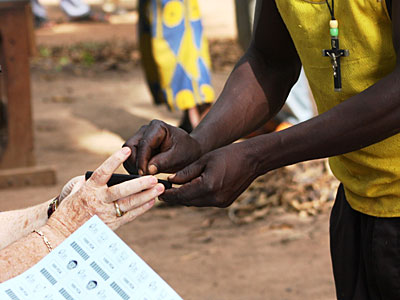 And it's not just up to the techies to make technological breakthroughs. Sandra had her own "eureka moment" a little while back, which could now help transform the way CRS keeps track of the people we're helping.

She came back to the office one day, none too happy about the problem of tracking the people CRS serves. And then a serendipitous event changed everything.

"I had a magazine in my hand, and I threw it on my desk and starting doing something else. Then I turned and looked and saw the barcode on the back of it, and suddenly thought, 'Aha! That's how we can do it!' "

Sandra explained her idea to the IT staff, who began to turn it into a reality.

"The methodology we used was really quite different to how I'd imagined, but that just shows the importance of bonding between IT people and 'field' people like me. They know so much more about these things."

Last summer, Sandra saw her barcode technology put into practice as a pilot program during CRS seed fairs in the Central African Republic. CRS gave each person we serve and each vendor an identification card with a barcode on it. A scan of the barcode registered the person and kept track of what they received or sold. Photos of each person, taken with a phone camera, plus information about them were stored in a digital format, making them accessible on- or offline—a world away from all the paper forms, signatures and thumbprints of previous fairs.

"We found it saved time, it saved money, everybody enjoyed it," Sandra says. "I thought people might be a bit afraid of the technology, a bit reluctant. But they embraced it and were excited about it. The Central African Republic is one of the poorest countries in the world, with a very low literacy rate. So it just shows that technology is something that anyone can accept and use. Plus, it made things a lot simpler. It could really revolutionize the way we do things."

We seek daily renewal from the source of all life, and so we pray ... END_OF_DOCUMENT_TOKEN_TO_BE_REPLACED

Our walk with God is reflected in our walk with others, and so we pray ... END_OF_DOCUMENT_TOKEN_TO_BE_REPLACED