When Fatuma Ali Sali talks, the words come out as if they are spilling down a waterfall. It’s hard to keep up. With a mischievous smile, she acknowledges she’s talking too much, not leaving time for anyone to ask questions. 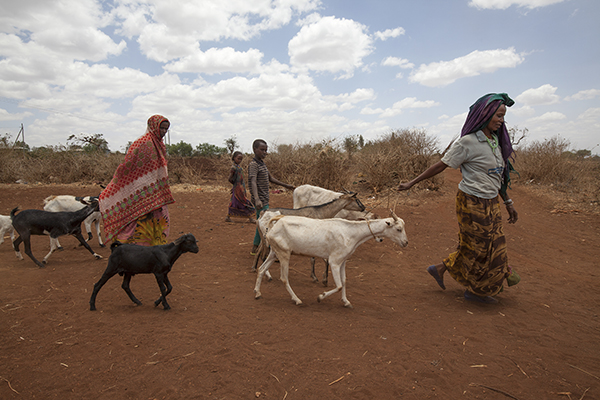 Fatuma is one of the millions of Ethiopians severely affected by the worst drought in 50 years. Thanks to a CRS program helping families reduce their vulnerability, she can now better withstand such crises and even buy enough food for her family. Photo by Petterik Wiggers for CRS

“I’m so happy. I’m laughing and feeling happy,” she says. “I’ve learned how to protect my family from climate change.”

Fatuma is one of nearly half a million people participating in a Catholic Relief Services project on resiliency and adaptation. The 3-year project will help people use new practices and technologies to mitigate the devastating effects of hotter temperatures, prolonged droughts and soil erosion.

A mother of eight living in a remote area of Ethiopia’s eastern Oromia Region, Fatuma sits on one of the small rocks in her one-room mud house. An occasional bleat comes from three small goats and a young calf, chained to the wall next to her. Livestock is one of the most valuable assets a family can have here, so sharing her small home with them is like parking a car in a garage.

While she is joyful today, just a year ago, Fatuma didn’t know if her family would be able to survive. Speaking to her in April 2015, she said, “We’ve seen climate change harm our lives time and time again. Drought has been getting more and more serious over the last 20 years.”

At the time, her family’s only income came from selling crops at the local market. Without a harvest to sell, her husband found work plowing their neighbor’s fields—all by hand, because he had no ox. Their only animal was a donkey barely strong enough to carry water.

Now, Fatuma and the animals in her home tell a different story. “Even though this is not a good year, we’re trying to improve our livelihoods,” she says. “And we’re learning about climate change adaptation.”

“Not a good year” is putting it mildly. Ethiopia is suffering through the worst drought in 50 years. Millions of people live on the brink of disaster as a strong El Nino current intensified the latest of the country’s recurring droughts. Climate change has caused longer, more severe dry periods. If another harvest fails, up to 20 million people could face life-threatening food shortages unless they receive immediate aid. 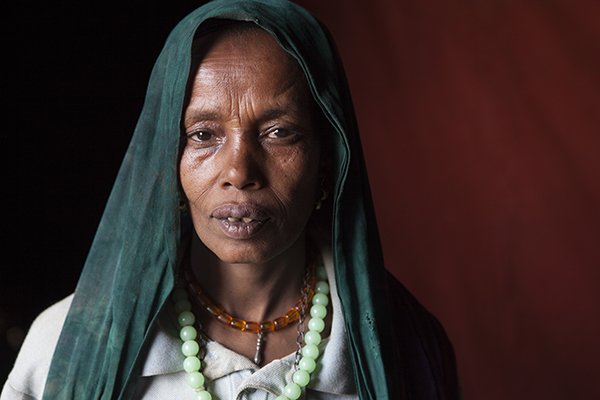 Fatuma is better able to cope with drought thanks to a CRS project that includes, among other things, microfinance and natural resources management components. Photo by Petterik Wiggers for CRS
CRS’ resilience project is meant to break this cycle by taking a grassroots approach to finding responses to climate change. Communities receive training in a number of different areas and then take matters into their own hands. Project participants have built resilience by:

Since early 2015, CRS has helped thousands of people—from farmers to animal herders—become more resilient by adapting through new behaviors, approaches and technologies. The El Nino crisis means changes are only incremental, but they are a beginning.

“There’s been an improvement,” says Fatuma, with a nod to the animals she was able to buy with a loan from her savings group. Joining the group has given her financial independence, a life-changing form of resilience. She’s also had a small harvest thanks to drought-resistant seeds and training on how to cultivate vegetables.

“Last year, I said I was open to this project,” she says. “When I joined, I got a lot of information on the immediate risks of drought. Now I’m well-adapted to the situation.”

Fatuma has come a long way since last year, when she was afraid of losing her home. “I have much more confidence,” she says, with a little sparkle in her eye. “If it wasn’t for the program, we would have migrated to look for wages.”

Instead, she can sit in her house and hear the reassuring sounds of her goats and calf.

Pray and reflect with your community on our call to respond to the needs of our sisters and... END_OF_DOCUMENT_TOKEN_TO_BE_REPLACED

Reflect on the impact climate change has had on our planet and pray for the Holy Spirit to change... END_OF_DOCUMENT_TOKEN_TO_BE_REPLACED

August recess is a key moment to meet with your members of Congress while they are out of session... END_OF_DOCUMENT_TOKEN_TO_BE_REPLACED