“I couldn’t believe it when I first saw the houses here—it was more than we expected.”

On May 23, 2017, a violent conflict erupted in Marawi City between government security forces and armed fighters from two radical Islamist groups—Abu Sayyaf and the Maute group. Over the next five months the conflict raged, forcing over 70,000 families to flee their homes and seek refuge in nearby towns, where they lived in substandard and insecure conditions.

When the violence broke out, Catholic Relief Services Philippines—which has ongoing work in Maguindanao province—moved quickly to bring help to displaced residents. Among them was Jalilah Barodi, her husband and two children, ages 5 and 7.

Leaving behind their home in Marawi, Jalilah Barodi and her family slept on the streets, shared a small room with two other families, and lived in a makeshift  tent community. They lacked basic necessities and waited for two years for help to arrive. 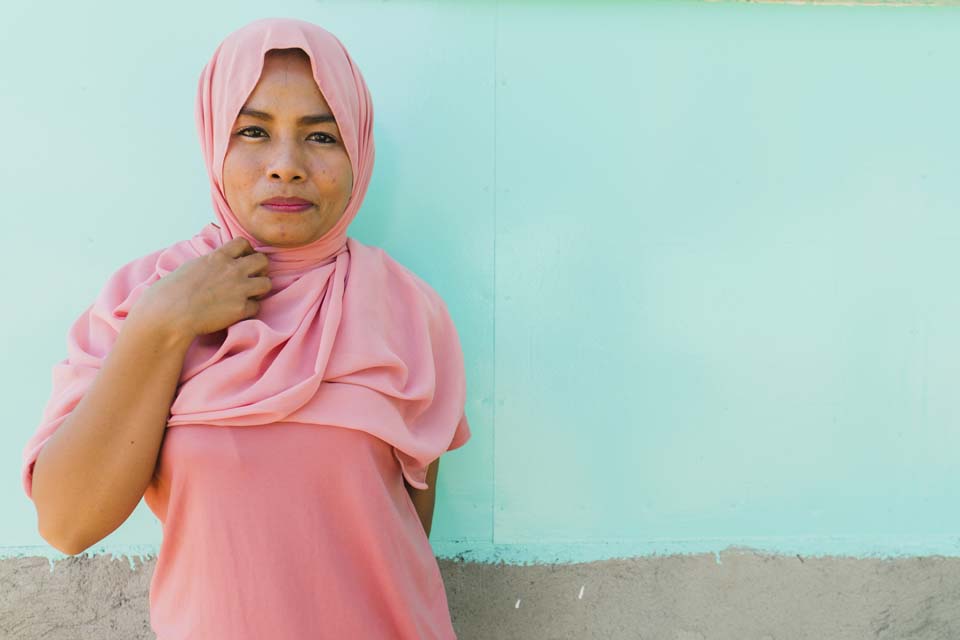 Jalilah and her family were forced to flee their home during the Marawi Siege of 2017.

Fleeing for their lives

At the outset of the conflict, Jalilah and her family stayed in their home, hoping for a quick end to the firefights. But within only three days, ongoing attacks and nearby bombings left them no other choice than to evacuate.

“We were not able to pack more than we could carry,” says Jalilah “we were all scared, and we only wanted to get far away as soon as possible.”

They grabbed what they could from their home but left most belongings behind. “My children were crying, and my husband and I were panicking as we saw people running past our house when the gun fights became closer,” Jalilah says. “We only carried some clothes and grabbed our cash before we ran for our lives.”

“We were lucky the school was on break. The municipality allowed us to stay in it,” Jalilah says. She and her family shared a 215-square-foot room with two other families.

Jalilah and her family lived in the school for three months until classes resumed and they were asked to leave.

“It wasn’t comfortable living in the school, but at least we had a roof above our heads. It was safer than living on streets,” says Jalilah.

The family traveled to a temporary shelter just outside of Lanoao del Norte’s Pentar municipality. This is where they’ve stayed the longest and faced ongoing challenges like water shortages and chronic malnutrition. 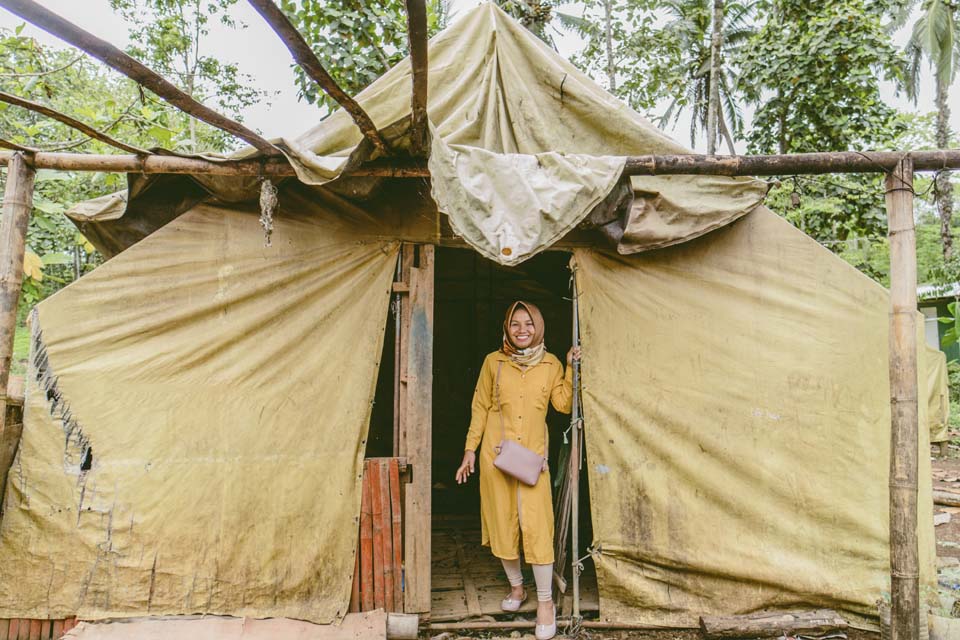 After three days of hiding in their home during the siege, Jalilah fled with her husband and her son, Imran, from their home in Marawi City, taking only what they could carry.

“It was okay at first. We got used to it,” says Jalilah. “But I never thought that for two years my children will live in a tent and eat canned goods or instant noodles almost every day.”

Another major challenge for the 14 families living in the shelter was that none of them were ever registered as temporary housing recipients.

“We were so sad. All of us here were not recognized as displaced families by the local government because we were not present at the assessment of families,” explains Jalilah.

With funding from the U.S. Agency for International Development Office of Foreign Disaster Assistance, CRS is prioritizing families like Jalilah’s who are living in unofficial and unregistered tent cities and evacuation centers.

“We couldn’t contain our happiness when CRS representatives found us here and started interviewing us. We were given hope,” says Jalilah.

About three months after the interview with CRS representatives, Jalilah and all of her neighboring families transferred to CRS’ temporary shelters. 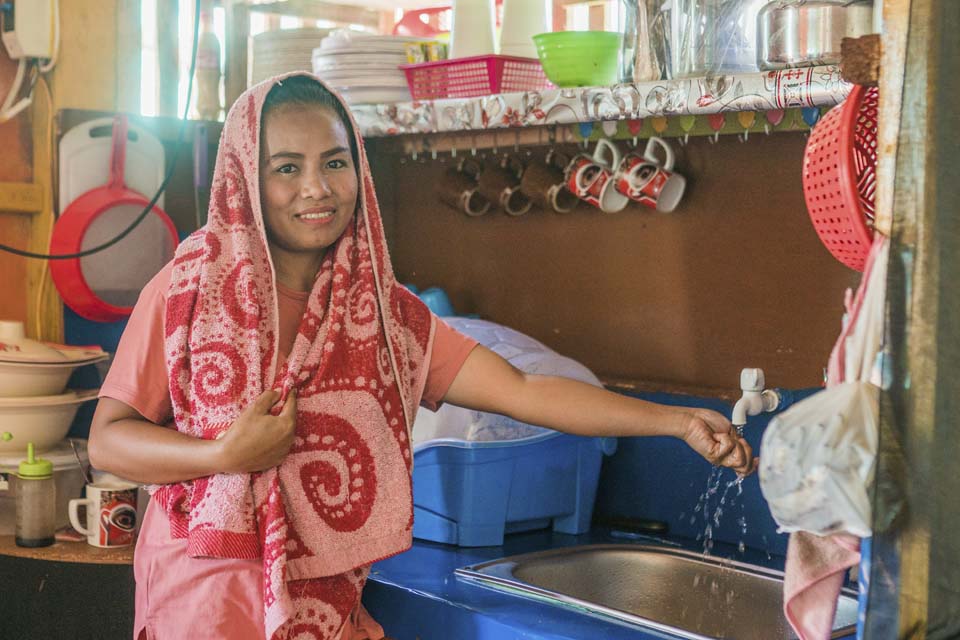 Jalilah in her home in Pataon. Before moving into the home built through a CRS project, she and her family were forced to walk long distances to access water.

“I couldn’t believe it when I first saw the houses here—it was more than we expected,” says Jalilah.

CRS has completed 100 of 400 planned temporary shelters, with 25 currently under construction. Before construction, CRS determines the specific needs of each displaced family.

Jalilah, now a mother of three, will move into a two-bedroom shelter. She and her husband are also hoping to customize the kitchen and dining areas so that they are large enough to accommodate their family of six, which now includes Jalilah’s mother.

“I was so excited to know that the house will have two bedrooms. There are also water tanks and faucets, and we even have our own toilet,” says Jalilah. “We don’t have to walk for miles again to fetch cooking and drinking water.”

The dignity of hope

In Marawi, Jalilah and her family had a beautiful home. Jalilah’s husband had a regular job and she ran a variety store where she sold imported shawls and scarves from Indonesia. Life is so different now, but Jalilah has hope. 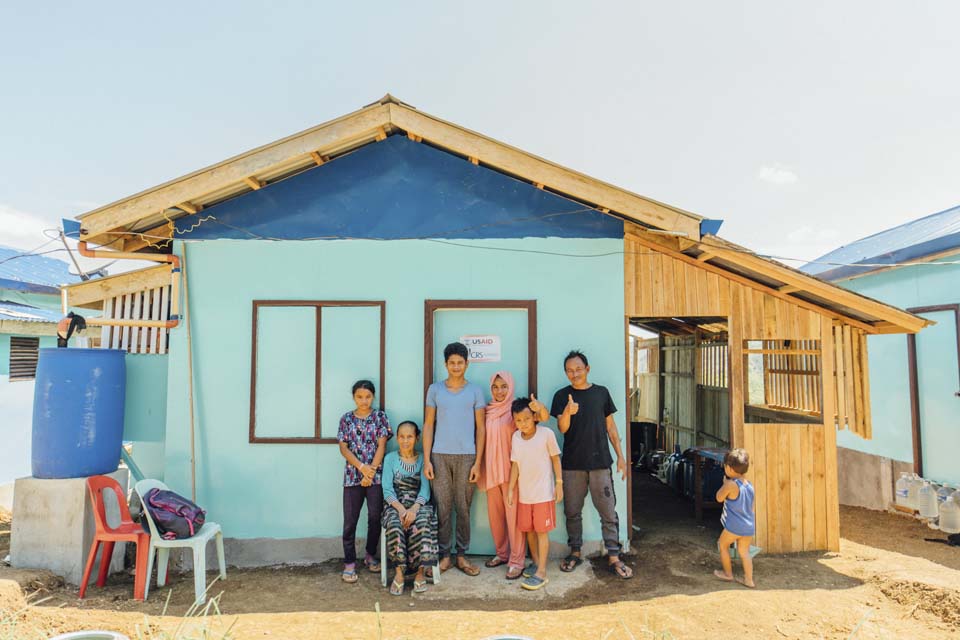 Jalilah and her family in front of their home in Pantaon. It has two bedrooms and a living room. It also has a kitchen and bathroom with running water.

“Compared to what we have experienced in the past two years, we are now so happy and thankful for what we have. It gave me hope and made me a different person,” says Jalilah, who has become an active member within her shelter community.

“Before the conflict, I never cared about my neighbors,” she says. “We rarely got together or had time to talk. But here, our neighbors who’ve been with us for the past two years became like an extended family. We actually requested to live next to each other when we relocated here and CRS granted us that wish.”

Jalilah is once again selling imported shawls and scarves and her husband drives a tricycle taxi. “Our life is getting back to normal again. I have hope for my children’s future,” says Jalilah. “We now feel safe and secure.”

Read the latest update from CRS country programs and partners around the world as they respond to... END_OF_DOCUMENT_TOKEN_TO_BE_REPLACED

Read the latest two-page summary from CRS country programs and partners around the world as they... END_OF_DOCUMENT_TOKEN_TO_BE_REPLACED