“You have behaved badly. That’s why you’re here.”

Fourteen-year-old Eva* thought she was being punished for disobeying her parents. That was what she was told by those who had trafficked her to work in the Peruvian sex trade. It took a social worker to explain to Eva that her parents were actually searching for her, and that her only mistake was that she had trusted a friend too much.

Amalia Ravelo Arias was that social worker. She has worked for Caritas, a partner of Catholic Relief Services, in Madre de Dios, Peru, for 10 years. Madre de Dios, located in southeastern Peru, is part of the Peruvian Amazon. It’s also one of the regions most affected by human trafficking in Peru.

In Eva’s case, a 15-year-old friend told her she should leave her family and make some money. Eva followed her friend out of curiosity. She didn’t know what she was getting herself into.

“Normally, the young girls used to come around 16, 17 years old. Now, they are coming at around 13 or 14. They have been taken from their home with lies,” Amalia says.

Those lies come in many forms.  Some girls read and then act on fake advertisements for restaurant workers or nannies. Sometimes a “boyfriend” starts dating a girl and convinces her to move with him.  In other cases, “sponsors” convince a minor’s parents to allow the child to go with them in order to get a better education.

Amalia says this goes on in cities and homes all over Peru, especially those where there are financial or family issues.

“Those who capture know the life and work of each family of each girl. Many of the families have troubles or are dysfunctional. I think [the traffickers] have set their sights on a teenage girl. They follow her and follow her until they succeed in capturing her. Need makes them accept and come to work,” Amalia says.

In many cases, once they are captured, the children–especially girls–are handed off to three or four people. It’s an operation that is meant to be confusing. Much of the travel happens during the night with several people and multiple stops, and is often done via bus. When they reach their final destination, it’s very different than what they were expecting.

Human trafficking in Madre de Dios and surrounding areas has a strong connection to illegal gold mining. It’s estimated that 80% of the economy of Madre de Dios is dependent on mining. Much of that mining is illegal, meaning workers have not registered or entered into the lengthy formalization process. In addition, illegal mining is often done in protected areas of the Amazon or in the territories of the indigenous people. The mining can be destructive to the environment.

“When the work ends, it generates a change in the ecosystem because it totally destroys vegetation, visually changes the Amazon territory,” says Tattiana Cotrina, CRS Peru project manager. “It seems as if you are not in the Amazon, but in the desert. And as mining is currently developed, it has no remediation programs or mine closure, so the ecosystem remains completely altered.”

This type of mining is also devastating to communities. Many miners migrate to where they work. They set up camps and lives.

One of those areas is La Pampa, which is about 90 minutes from Puerto Maldonado, the capital of Madre de Dios. La Pampa began to form in 2007 with 50-70 miners. By 2011, there were hundreds of miners. Today, it’s not known exactly how many people live in La Pampa, but it is estimated that in the 15 illegal mining camps that exist, there are at least 20,000 people.

Near the camps are bars. During the day, they are seen as a great center of commerce in the middle of the Amazon. In these stores they sell groceries and products related to mining. But at night, businesses disappear and the buildings become nightclubs called “prostibares.”

“You can see their multi-colored lights and the flashy posters with images of half-naked women and suggestive phrases. The doors are open and it is easy to see girls and adolescents drinking and dancing with men. There are always one or three women seated at the doors of bars. They are the ‘hook’ for occasional customers,” Cotrina says.

“The victims are attracted with labor promises. In La Pampa, that promised paradise becomes a hell that you can see in front of your eyes.”  – Tattiana Cotrina

Cotrina says the streets of La Pampa are dangerous. She says there is a constant fear of insecurity. In addition to that, the health conditions are not good. Streets become public urinals and garbage piles up along the road.

“Madre de Dios is truly a place where the issue of trafficking is a very serious problem. Women are pulled from their place of origin, from their communities. They bring them to Madre de Dios to make them work in a forced way in those bars and those brothels. The bulk of that population is underage women. They are girls,” says Cotrina. “The scene is repeated night after night, and for cars that pass in front of La Pampa, the common thing becomes invisible.”

According to the Trafficking in Persons, or TIP, report released by the U.S. State Department, women and girls exploited in sex trafficking near mining communities are often indebted due to the cost of transportation. They are unable to leave because of the remoteness of the camps and the demand for commercial sex by miners in these communities.

More than a number

Many migrants travel to Madre de Dios of their own free will. But for those who lack a national identity document, the illegal mining sector may be their only chance for employment. Many of these migrants are extremely poor and geographically isolated; they are very vulnerable to exploitation and labor trafficking because of their circumstances.

Workers are quite often recruited in their communities. They may be told stories of others striking it rich, but are provided with very few details about their conditions of employment. Some workers may be given money or clothing as “gifts.”  Those “gifts” turn out to be debts that need to be repaid. Other workers are sometimes sold by their family members, who received money for recruiting them.

When they get to the camps, workers often are isolated and closely watched. They do not receive a salary because they are paying off their “debt,” and therefore don’t have transportation to leave.

Luis Alberto Sanchez Villaran is in charge of the Office of the Special Prosecutor for Human Trafficking Crimes in the department of Madre de Dios. He sees labor trafficking in the camps, but sex trafficking is also very prevalent. He says many of the victims are from other parts of Peru, including Cusco and Puno, and are enticed by false job offers.

“Victims brought from those distant places are taken into those mining camps with no possibility of returning. The traffickers are very well organized. They are watching the victims at all times,” he says. “There are several employment agencies where they recruit victims–underage and adult females–through false job offers. The place where they will work is not the one promised. It is not a restaurant; it is a nightclub. It is not a city, but rather a mining camp.”

Luis says there are approximately 800 underage victims of trafficking in mining camps in Madre de Dios. Part of his job is to stop the trafficking from happening. One way is by patrolling the highways.

“We control all the buses coming into the department. We step in and get all the children off. We control the entry of minors who come without documents, who come without close relatives, who come without permission. Moreover, in the area of occupational and sexual exploitation, we developed many operatives in order to rescue those victims who are being violated in these sectors. We go with the firm hope of rescuing the largest number possible of victims,” Luis says. 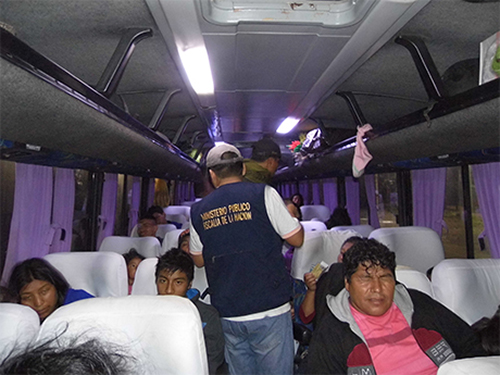 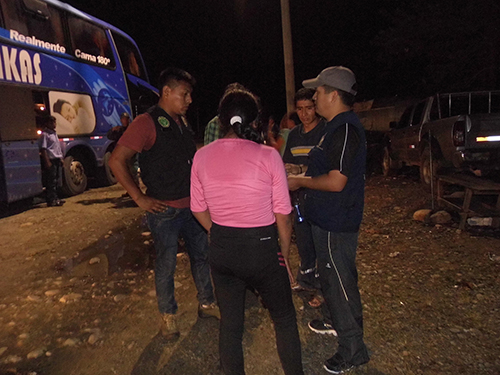 According to the TIP report, the country acknowledges that different ministries collect overlapping statistics regarding anti-trafficking operations, victim identification, arrests and convictions. This lack of data standardization can make record keeping difficult.

The office dealing with human trafficking crimes in Madre de Dios has been running for about a year. In that time, Luis says the prosecution has rescued and served 322 victims. He says about 30 people are being detained as they wait for trial and a possible conviction.

While prosecution is bound to legal capacity, CRS and Church partners work to prevent human trafficking and to protect the victims. Campaigns explain triggers of trafficking to people and bring real-life testimony to communities. People who have escaped or survived trafficking rings are brought back to tell their stories. CRS supports work where policies on trafficking are developed.

“In terms of protection, the Church has been critical in providing safe houses and refuge for women and children who have been caught up in these schemes,” says Kelly.

Pamela Elisa Robles Espinoza, who works with Dominican Missionary Sisters of the Rosary, says human trafficking is a human rights issue, and everyone should be concerned.

Pamela says that few people have been held responsible for human trafficking in the area.  Many call it “the law of the jungle,” where people often turn their head to what is going on. That is starting to change, she says, as institutions join together and are educated about the problem.

“So we’ve gone to a school in the state where we’ve proposed three workshops: getting to know each other, talking about trafficking and, through a game, learning how much knowledge they have on the issue of trafficking,” Pamela says.

She says that families also play a role in preventing trafficking.

“Affection is super important. The issue of emotional bonds is very important: to be able to communicate within the family, to be able to listen to each other. In working with young people, what they ask for the most is to be heard,” she says.

“It gives me hope to talk to other young women and say, ‘Look, trafficking is not a story. It is something real. And you and I, and those of us here, as long as we inform ourselves and we educate ourselves, we can do something.” – Pamela Elisa Robles Espinoza

August recess is a key moment to meet with your members of Congress while they are out of session... END_OF_DOCUMENT_TOKEN_TO_BE_REPLACED

Watch videos on the issues of hunger and climate change here. END_OF_DOCUMENT_TOKEN_TO_BE_REPLACED