“The group has brought us a sense of unity.”

Hajara Adamu knows the problem of access to finance only too well. She is a businesswoman and sees diverse opportunities for growing her income but getting financing can be difficult.

“We have nowhere to collect loans,” she says.

Hajara’s farm and street-food businesses bring in just enough to feed her eight children but not for much else. When Hajara’s husband died in 2011, she became the family’s sole provider and her older children had to drop out of school. She could no longer afford their tuition and she needed their help on the farm.

In 2014, Hajara’s community of Mbalala in North East Nigeria was attacked by armed groups. Hajara and her family fled their home and remained away for two years. This led to further economic disruptions. Hajara could not earn a living during their displacement and relied on family for basic needs. Upon their return in 2016, the local market had not been reopened for business and Hajara could not return to selling food there. 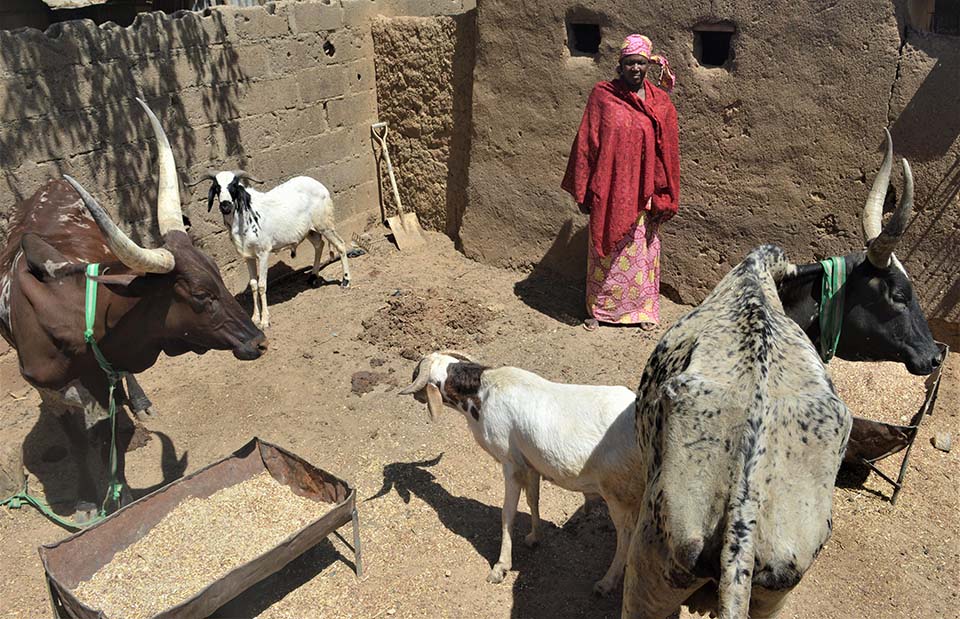 Through SILC, Hajara now invests in the purchase and fattening of rams and cows for a profit.

In 2019, when Catholic Relief Services began working with communities and families affected by the Lake Chad Basin crisis, Hajara’s community was selected for support. With funding from the German Federal Ministry for Economic Cooperation and Development, CRS is implementing the Stabilization and Reconciliation in the Lake Chad Region, or STaR, project to support communities and families to rebuild shelters, functioning markets, livelihoods, water, education and health care infrastructure. CRS recognizes that access to finance is vital to rebuilding and scaling up livelihoods, so we work with participating communities to introduce our Savings and Internal Lending Communities, or SILC, method to project participants.

Working with prequalified and trained community members known as field agents, participants form groups and CRS facilitates this user-owned and self-managed savings and lending process. SILC groups pool the weekly contributions of their members, numbering from 10 to 30 people, in a fund from which group members may borrow at a preset interest rate and repayment schedule. In November 2019, Hajara Adamu became a founding member of the Aminchi SILC group in her community.

Hajara met with the SILC field agent to sign up. She says she decided to join because, although she had worked most of her life, she had not been able to save.

“Before SILC, I barely had any savings,” says Hajara. “SILC has been an eye-opener and shows the value of saving and keeping money.”

Access to rapid low-interest loans has been a major benefit for Hajara, allowing her to finally engage in new enterprises. In December 2019, she took a loan of $78 from her group, bought two rams at a total of $73, and fattened and sold them within three months at $178. In April 2020, she took another loan of $317 from the group, invested in more rams and eventually sold them off at double her investment. Hajara promptly paid off both loans with a 10% service charge within the group’s first savings cycle. A savings cycle runs for 10 months, after which members receive their savings plus profit from interest on the group’s loans. 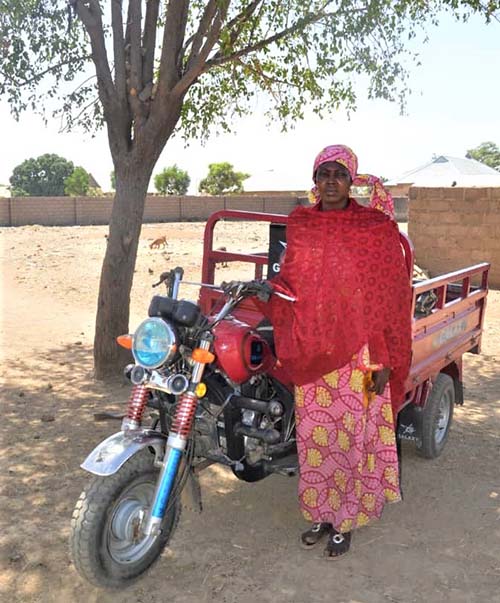 Hajara bought a tricycle with earnings from her savings group. Photo by Suleiman Musa/JDPC Maiduguri for CRS

Access to finance is vital to rural development and livelihoods yet remains inaccessible for many people in rural Nigeria. Financial institutions are reluctant to invest in rural markets over concerns of cost and profitability. This leaves people in the poorest rural communities—a demographic which comprises more than half of the country’s population—without critical financing to grow their livelihoods.

During the first cycle, Hajara saved $2.40 every week and at the end of the cycle received $135.40. Pulling this together with profits from her ram sales, Hajara invested in a motorized tricycle as another source of income. She recognized the demand for traders and farmers to transport their goods to and from markets. She has adult children who can drive it. On market days they lease out the tricycle and on other days use it to ferry water for clients and for waste disposal.

Prior to joining her savings group, Hajara earned an average of $24 a month from her food and farming. She now earns $26 per month from her tricycle business alone. She has expanded her food business and uses higher quality seeds and fertilizers on her farm. There was a shortage of rainfall last farming season but Hajara was still able to harvest 74 bags of grains.

“The way I saw my farm flowering in the beginning, I would have gotten over 100 bags if not for the poor rains,” she says. This would not have been possible without the benefit of being in a savings group that enabled her to buy better seeds and fertilizer.

The Aminchi SILC Group is now in its second savings cycle and Hajara has increased her weekly savings contribution from $2.60 to $12.20. She has also accessed two loans under this cycle. She used one loan to invest in storage for grains so she can sell them at peak periods. She used the second loan to purchase two cows and two rams for rearing. Hajara says she has not needed to sell her harvests from last season.

In addition to the economic benefits of belonging to a SILC group, Hajara is experiencing other social and educational benefits.

“The group has brought us a sense of unity,” she says. “When something goes wrong with a member, we rally around them and this has helped us become one. What has touched me the most is that the unity is so strong that if someone takes a loan, it is kept quiet, there is privacy. Sometimes we also receive lectures on financial literacy from our field agent, which is helping us. There are a lot of people who were not doing much before but who have now started one or two businesses”.

Hajara plans to save more to invest in her businesses and sponsor her children through school. She hopes that savings groups become more widespread and that more people can join. Going to their weekly meetings has become a highlight for her—especially since the group has adjusted to the COVID‑19 safety precautions of mask use, social distancing and handwashing at meetings.