The Cactucito cooperative, a cactus nursery formed by women 19 years ago, is located in Charcos, a community outside of Matehuala, the fourth-largest city in San Luis Potosí, México. After exploring the town, I noticed something glaring—the lack of men. "The community is practically formed by women," says César Álvarez, who works with one of our partners. In fact, each member of the cooperative has lost at least one relative to migration. 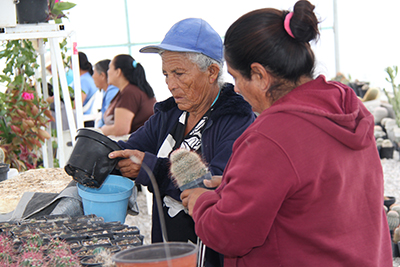 Basilia and Antolina, members of the Cactucito cooperative, prepare for a cactus sale. Photo by Christian Meléndez-López/CRS

Father Gerardo Ortíz Blanco, a strong advocate for the cooperative, led our group. We sat in a circle surrounded by an impressive variety of cacti. As we met, children ran outside the greenhouse, their laughter erupting as we introduced ourselves. Claudia, the president of the cooperative and the youngest in the group, talked to us about the group's accomplishments and challenges.

San Luis Potosí has almost 3 million inhabitants: 36% live in rural areas and 20% are of indigenous origin. There are 26 municipalities in the Altiplano Potosino, and its climate is unsuitable for farming. There are high levels of poverty and migration in the area. In Matehuala, 52,468 people—about 54% of the population—live at or below the poverty line. Most people work temporary jobs and earn less than $7 per day.

Leonor and Claudia told us that the nursery grows 107 species of cacti, plus some succulents. It's been a long road to success—the first time the women planted seeds, they died. But their perseverance has paid off; they now hold a permit, which not all farms are granted. Cutting cacti in Mexico is a felony, and exporting them is not permitted.

Succeeding at growing cacti was not the women's only challenge; their next trial was finding a profitable market.

Facing challenges with hope and education

Catholic Relief Services and our partner began working with the women this past April. During their weekly meetings, they apply Savings and Internal Lending Communities, or SILC, methodology to learn how to save their earnings. They're also learning to embrace the principles of trust, co-responsibility, solidarity and long-term planning. In addition to their main savings fund, the women have created an emergency fund to cover illnesses and unexpected needs. In the future, they hope to buy a truck together, so they can sell their cacti in other areas.

"The success of SILC lies in fostering savings habits little by little," says Sanjuana Rodríguez, a local health and community organization promoter. "Then, if God allows, to increase the savings toward getting a venue for a shop."

Over the past 3 months, the women have saved almost $24. That amounts to about 53 pounds of beans for their families. "The savings training and additional sessions have been of much help to us," group member María Salomé tells me. Antolino, another member of the group, has been inspired to save even more. "I've decided to drink less soda to be able to save—and it is worth it," she says. 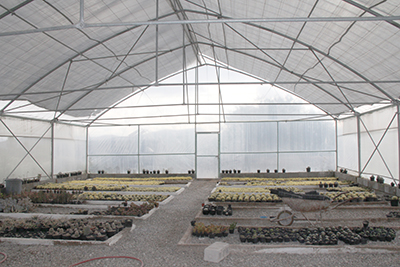 More than 100 hundred species of cacti are grown in the greenhouse. Photo by Christian Meléndez-López/CRS

Group members share their knowledge, expectations and challenges at the weekly sessions. The sessions also have a therapeutic component. "We offer emotional health sessions to mitigate some of the psychosocial impacts caused by migration," Álvarez says.

In it for the long—and inspiring—haul

Although the farm has been a success, the group has yet to find a target market. The only opportunity they've had to sell their products is at their yearly patron feast. And because many cooperative members support their entire families, it's not enough. The community survives mainly through temporary farm jobs and other nonpermanent opportunities. 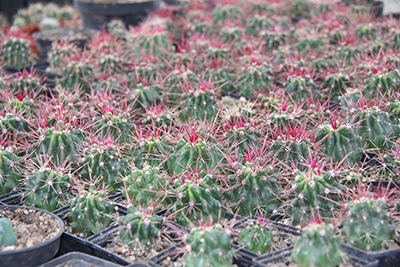 This one of 107 varieties of cactus that the women of Cactucito produce, the biznaga-roja (Ferocactus Pilosus). Photo by Christian Meléndez-López/CRS

But the future looks promising for this hardworking group of women. CRS partner MaxiTerra, a for-profit marketer specializing in fresh products, is designing a market strategy, and ENACTUS, a university volunteer movement, is working on a commercialization and marketing campaign. In the next 4 months, they expect to create a plan that will enable the Cactucito nursery to finally make a profit. Before they joined the SILC group, the women were discouraged. But today they have their sights set on a much brighter future.

We seek daily renewal from the source of all life, and so we pray ... END_OF_DOCUMENT_TOKEN_TO_BE_REPLACED

Our walk with God is reflected in our walk with others, and so we pray ... END_OF_DOCUMENT_TOKEN_TO_BE_REPLACED