Savings and Empowerment Are Keys to Success

About a dozen years ago, CRS was looking for a way to help the poorest of the poor financially. That may seem redundant–if you are poor, of course you need financial help–but it is one thing to help with nutrition or agriculture or water or health or even livelihoods, and another to help with finances. 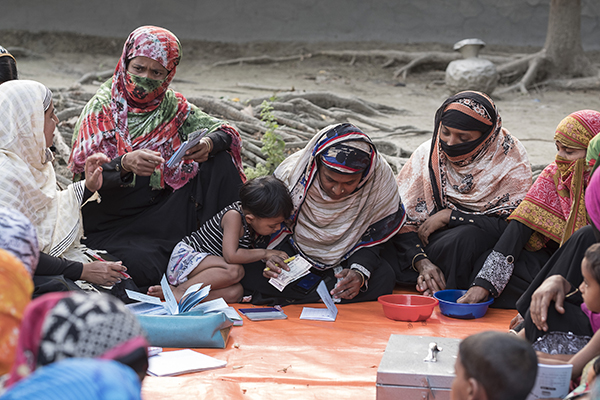 A savings-led microfinance group meets in Bangladesh as part of the CRS Savings and Internal Lending Community program. Photo by Map Mahmud for CRS

How do you make getting ahead financially a realistic possibility for someone who must run as fast as they can to stay in the same place economically, or who would find paying back even a small microfinance loan an unmanageable burden? Saving money and accumulating capital is the key, not just watching it disappear into the vastness of need. So, CRS came up with the SILC–Saving and Internal Lending Communities program.

In villages around the world, the program begins when anywhere from 15 to 30 people form a community—almost all of them women—agreeing to put a certain amount of money every week into a box with three locks. The treasurer keeps the box. Three other group members are the key keepers. Unlocking the box at each meeting is an exercise in trust and cooperation.

In addition to saving, the members can access the group’s assets by taking out a loan. The group decides on interest rates and payback schedules. At the end of a year, members get back the money they’ve saved plus a share of profits from the loan operation. CRS’ technical help usually ends at that point, but the members almost always continue on their own.

It’s amazing to see what SILC members do when they have a little capital. Maybe they buy a few chickens and start selling eggs. Or purchase merchandise and open a small shop. Some use it to tide their families over during the lean season between harvests so husbands don’t have to travel to the city to look for work, disappearing for months. Others pay school fees for their children.

As they save money, they talk to each other, building bridges of trust as they provide support, advice and encouragement.

But what’s really exciting is to see is the empowerment of the participants. Tom Shaw, CRS senior technical advisor for microfinance, says, “When a SILC starts, its members are thinking, ‘I can’t do anything.’ Three or four months in, they are thinking, ‘Maybe I can do something.’ And by the time they finish the cycle, they are saying, ‘Look! I am doing something!’”

Sometimes that something has nothing to do with saving money. SILC groups are often formed by various affinity groups--people with something in common. Maybe they are all affected by HIV or are victims of domestic violence. As they save money, they talk to each other, building bridges of trust as they provide support, advice and encouragement.

SILC has now reached 3.3 million people in more than 130,000 groups in Africa, Latin America and Asia. Though it has existed for only a fraction of CRS’ 75 years, SILC grows from our deepest roots, from Catholic social teaching. The SILC program is a prime example of subsidiarity, solving a problem on a local level. It promotes solidarity among its participants, people who otherwise might never join together. And, most importantly, it fosters integral human development as its participants grow materially, psychologically and spiritually.

When those three keys unlock a SILC money box, they open up something fundamental to our mission–a recognition of the dignity that God has given each and every one of us.

We seek daily renewal from the source of all life, and so we pray ... END_OF_DOCUMENT_TOKEN_TO_BE_REPLACED

Our walk with God is reflected in our walk with others, and so we pray ... END_OF_DOCUMENT_TOKEN_TO_BE_REPLACED