Saving in Burundi and Progressing to Peace

Most people couldn’t live deep in the rain forests of Burundi, but for thousands of years the Batwa people found everything you need to survive there: food, water, medicine and shelter. 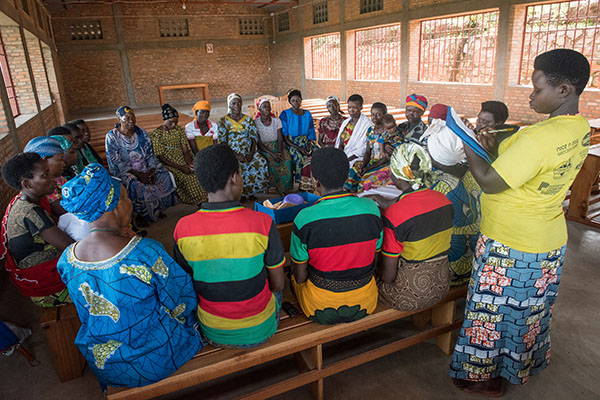 In Kukabami village, Burundi, members of a Savings and Internal Lending Community meet to make their monthly contributions. Photo by Michael Stulman/CRS

That hunting-and-gathering lifestyle ended as land was cleared for agriculture and cattle-grazing. Losing their physical and ancestral homes, as well as their role as the keepers and protectors of the land, the Batwa settled on the fringes of Burundi society as the most isolated, marginalized ethnic group in the region – truly the poorest of the poor.

That’s why Catholic Relief Services has been supporting the Action Batwa project for the last ten years, creating a social safety net so the Batwa – just one percent of Burundi’s population — can access decent housing, medical care, livestock and resources to improve farm production.

“You would be shocked that people still live in this kind of poverty,” says Father Elias Mwebembezi, who has led Action Batwa and works with the Missionaries of Africa, noting that it is harder to kick poverty out of the Batwa’s lives than it was to kick the Batwa out of the rain forests.

“When our families left the forest, it was complete poverty,” says Jovita Matungimana, a mother of six children in Kukabami village. “We didn’t even have basics – drinking water, healthcare, shelter or education. Children would be sick with nowhere to go.”

Without the forest providing economic autonomy, the Batwa needed almost everything, starting with land.

“We had no land. We would work for other people and get small amounts of food,” says Jovita. “We would go to the bush to find firewood and sell in the market for 30 cents.”

Obtaining land from the local government was complicated by the fact that many Batwa people never received a birth certificate. Action Batwa was there to assist with that and then to help thousands learn how to use their land, to farm and raise livestock.

“Now we have farms to cultivate, and with income, I can manage day to day,” says Viviana Nzinahora.

CRS and Action Batwa have helped form more than 40 community-based savings groups of about 25 people each. Members of these Savings and Internal Lending Communities, also known as SILC, pool their savings and make loans to members to pay for pressing needs or to grow businesses. The interest paid on the loans increases the group’s holdings.

During a recent SILC meeting, Viviana and Jovita met with friends under a community pavilion. 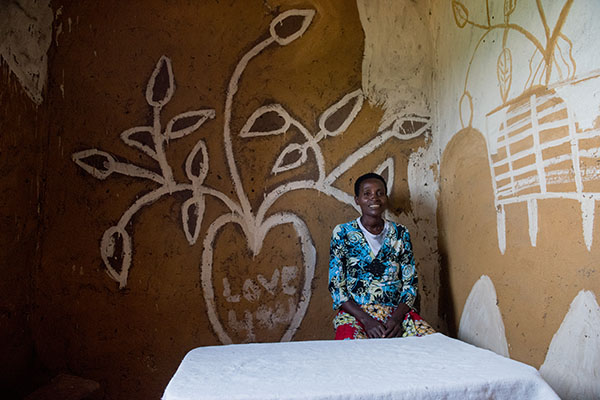 Jovita Matungimana at her home in Kukabami village, Burundi. She is a new member of a Savings and Internal Lending Community (SILC), organized by Catholic Relief Services. Photo by Michael Stulman/CRS

“By coming together, it is a way of expressing solidarity,” explains Viviana.

Men and women make their weekly contributions – equivalent to $1, $2 or $3 dropped into a bucket. The contributions were counted and recounted. The group saved more than $1,600 over the past year – all of which is kept in a box with three locks. Three different members each hold one key. A fourth member holds the box.

“We had no idea how to make progress in day-to-day life. We didn’t know that SILC was possible,” says Viviana. She’s taken three loans to pay for the land where she grows tomatoes, green beans and cassava.

“We are happy,” says Jovita. “We are cultivating our own land. We sleep in a better place. We drink clean water. People respect us. We have dignity. My children are much better off, and our future is bright.”