Sulaxshana “Sasi” Vimalan remembers the exact date her life changed. It was April 25, 2006. 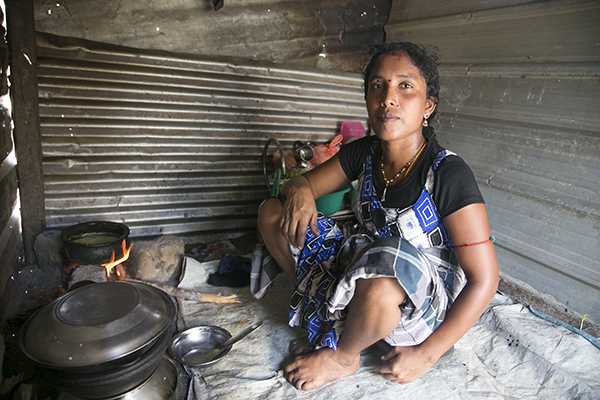 When Sasi Vimalan’s family returned to their land after 10 years in camps for internally displaced people, she brought the tin sheeting from their shelter and used it to construct a makeshift outdoor kitchen. Photo by Jennifer Hardy/CRS

“I was cooking,” she recalls, “and the first shell hit the well outside the house. We ran. We had gold and money in our house to pay for my sister’s wedding, and we had to leave it behind—our whole savings. The shells kept falling, and that’s the last time I saw my home.”

Sasi and her family joined the hundreds of thousands forced from their homes by Sri Lanka’s long civil war. Every day for 10 years she worried about how she would have enough food and water, let alone money to pay for medicine or other needs. It’s just one of the many burdens she’s borne while on the move or in camps for displaced people.

But now, she is home again. And Catholic Relief Services, with support from the U.S. State Department’s Bureau of Population, Refugees and Migration, is helping Sasi build a new home—and her life.

CRS has long supported Sri Lankan refugees in camps in India, but now, as many leave the camps to return to Sri Lanka, CRS has broadened our support to include both refugees returning from the Indian camps and internally displaced people in Sri Lanka. While Sasi was displaced inside Sri Lanka, her brother and other family members fled to India.

A strange place once called home

The war ended in 2009, but because of the slow process of clearing mines, the Sri Lankan military did not allow anyone to return to Sasi’s community until March 2016. After that, her family rushed home.

“We could not find our land,” she says. “The whole landscape had changed from shelling and military construction. We found a small temple we recognized covered in vines, so then we could identify the location of our former home. All that remained were a few scattered stones.”

This was a far cry from Sasi’s memory of a decade before. There was sorrow because her brother had been forced to join the revolutionary forces, the Tamil Tigers, but mostly she recalls a lovely home and school with clean latrines, time for play and dreams for the future. Before April 2006, the family lived in peace, even as fighting raged elsewhere.

But Sasi no longer felt safe here. Although it once was her home, now it reminded her of years on run, which included nights spent in trenches covered with camouflage cloth and in abandoned bunkers. And always, there was the worry about where to go to the bathroom. When hidden in fields and riverbeds, she had to wait for darkness. When in formal camps, she had to plan for long lines or wake in the middle of the night to use one of the few latrines.

So even though she was home, Sasi was still waiting for nightfall and walking more than half a mile in darkness to use an open field. While the family had government support to rebuild a simple home, it was not enough to build a latrine.

Happy, safe and at peace 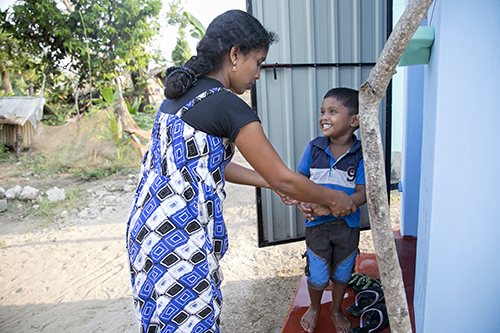 CRS stepped in with our local partner Organization for Elam Refugee Rehabilitation to build the family a latrine. Sasi finally feels safe again.

Jomey Joseph, CRS head of office in Chennai, India, says, “CRS has worked with Sri Lankan refugees in India for many years, and we have heard them discuss the benefits and risks of returning to Sri Lanka. We know it’s a difficult choice and we can’t make it for them. But we also know that these Sri Lankans, like refugees everywhere, deserve the support they need so they can make their dream of returning home a reality.”

That support in Sri Lanka is helping reunify Sasi’s wider family. “My brother lives in a camp in India,” she says. “We’ve told him it’s a good place to return now. We can earn a little income from fishing, and we have a latrine so his wife doesn’t have to go far at night. He is planning to leave the camp in India and come home in 2 months.”

Sasi adds, “I’m thankful for the help from people in the U.S. They’ve helped us to make our lives here on our own land. We never wanted conflict. Now we feel happy, safe and at peace—and peace felt distant for a long time.”

The Water for Life video illustrates the work of Catholic Relief Services in partnership with the... END_OF_DOCUMENT_TOKEN_TO_BE_REPLACED

An activity that requires participants to carry water, joining them in solidarity with people who... END_OF_DOCUMENT_TOKEN_TO_BE_REPLACED