They say you can never really leave the gang. But that's not always true. Although he almost died trying, Manuel* got out, and now he's trying to help others in his community do the same. 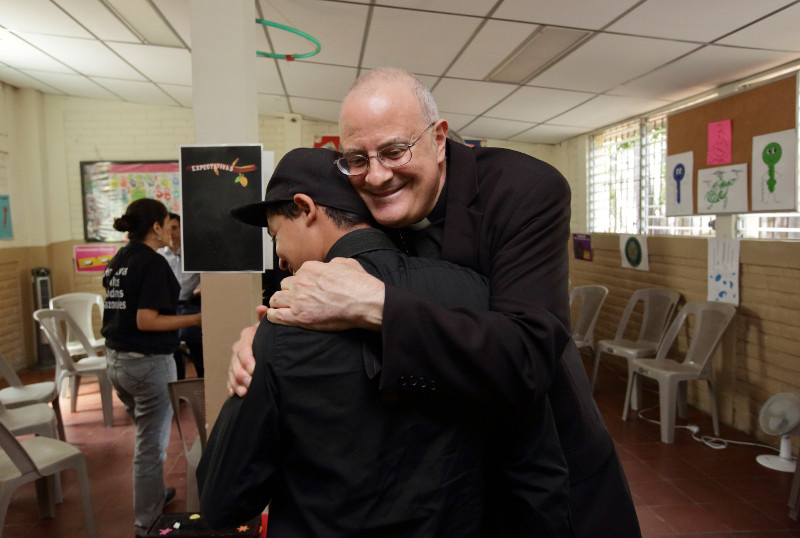 Manuel joined one of El Salvador's notorious gangs at the age of 14, figuring he'd be a member for life. It was easy money for a kid with no parents. And for once, he could dish out the beatings instead of take them.

But after spending a year in jail, he quit the gang. The decision changed his life in the best—and worst—possible ways.

Nearly 3 years later, he's gone from being a menace to a leader.

"I've realized I want a real home and to do that, I need to change my way of thinking," Manuel says. "I want to be a good example so what happened to me doesn't happen again."

Through a six-month program that builds the life and vocational skills young people need to find a job or start a business, CRS is trying to make sure what happened to Manuel doesn't happen to others.

The model, first used in Harlem, New York, teaches conflict resolution, leadership and communication skills, and trains participants to repair computers or work in customer service. It also provides enterprise development training, seed capital and mentors for those who want to start a small business. Many students have found jobs through the program's broad network of Salvadoran partner businesses, which include clothing stores, beauty salons, restaurants and bakeries.

For Manuel, now 30, leaving the gang was the hardest part. It killed his brother, a pastor in Guatemala, and it nearly killed him.

A few months after Manuel quit the gang, he found himself on a deserted farm outside of San Salvador with people he thought were his friends. It was a gang tribunal. The tribunal heard 10 cases that day, including his. They gave him an ultimatum: stay in the gang or face the consequences. When he said he was leaving, they killed his brother as retribution. Gang bosses determined the punishment from prison. Manuel made it alive, but only after a severe beating, although forever changed.

The executions made the news. The following days were torture for Manuel, as gang members harassed him and accused him of collaborating with the police. He stayed inside for months after the trauma, paralyzed by the guilt and loss he felt over his brother's death.

"All I could think about for the longest time was what happened to my brother and how it was my fault," he says.

El Salvador is arguably one of the world's most violent countries. Violence has grown in the last decade as street gangs, many tied to the United States, expand their influence.

Meanwhile, nearly half the population is under 18; most only make it to the 5th grade. With many young people out of school and out of work, the likelihood of violence will continue to increase.

That same violence is also pushing young people, already discouraged by a lack of opportunity, to immigrate in record numbers. A 2013 report by the United States Conference of Catholic Bishops found that fear, rather than poverty, is the primary reason children are migrating to the United States.

"Kids who are unemployed and who have little education can feel like their life has no purpose or meaning, creating a perfect vacuum which gangs, unfortunately, fill," says Katherine Andrade, program manager for CRS in El Salvador. "Our programs demonstrate that youth facing extreme exclusion have the power to change the direction of their lives and their communities."

All told, 75% of the 2,804 youth who have completed the CRS program have gone back to school, found employment or started a small business.

The results are a testament to the role young people can play in transforming their lives and their communities, if given a chance.

When he started the CRS program, Manuel trusted no one. It was hard for him to even speak. Teachers and mentors in the program encouraged Manuel and his classmates to talk about the impact the country's insidious violence has had on their lives. When he saw that fellow students did not judge him, he slowly came out of his shell.

Here's what he shared: The tragic descent into gang life started when he was just a child. His father left when he was a baby. His stepfather beat him. When he fought back, his mother sent him to live with an uncle who treated him more like a servant than a family member.

His anger and hurt were boiling over by the time Manuel latched onto the gang.

"I didn't realize how quickly I was getting into bad stuff, and the community was looking at me terribly," Manuel says. "But in the end, they weren't the ones feeding me—and I had lost confidence in everyone."

Manuel hasn't forgiven himself. The loss of his brother continues to motivate him. He and other young people from his San Salvador suburb—an area outsiders fear—have formed a youth group. Determined to decrease violence, they do what they can to replicate some of the activities they experienced through CRS.

These days, the community looks at Manuel differently—with trust instead of fear.

A neighborhood family took him in and gave him a home. He's back in school, which he left at age 10, and is determined to go to college. That's something he never considered before he joined the program.

"What they taught us—the life skills, the work, the community service—it really wakes you up," Manuel says.