Keza Evelyne is a healthy young child. When you look at her, you wouldn’t guess that one month earlier she was struggling with severe malnutrition. 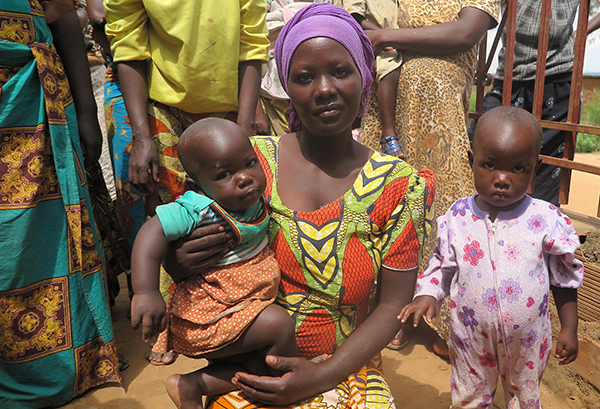 Keza, right, her mother and little sister attend a village nutrition school to help the family improve their nutrition. Photo by Emma-Claudine Ntirenganya/CRS

Catholic Relief Services began working with Keza, her little sister and her mother, Nyiracumi, at the village nutrition school in their neighborhood in Mataba Village, Rwanda. It was a month after CRS began work on the Gikuriro program, which helps these schools teach parents how to cook healthy food and lower the risk of malnutrition for their children.

Classes last for 12 days and focus on rehabilitating already malnourished children. Mothers bring their children, age 5 and younger, who have signs of moderate malnutrition.

Each mother also brings something to contribute to cooking a healthy meal: a variety of vegetables, small fish, fruits, beans, potatoes and eggs. This way, mothers learn how to cook healthy food using what’s available in their homes.

“At the village nutrition school, we are not given any food. We are only asked to bring what we already have at home. They teach us how to cook and mix food well to make a healthy meal for our children,” says Nyiracumi.

In fact, mixing different food groups together is one of many nutrition techniques taught at the school. When food is mixed together, children eat everything that is prepared without rejecting any nutritious food they do not like.

At the start, Nyiracumi did not believe food would cure Keza because she fed her regularly. Still, she was desperate to see Keza healthy, so she followed the school’s instructions. After the 12 days of her first class, Keza’s malnutrition rating improved from severe to moderate. After a second round of classes, Keza’s nutrition status was rated good. And Nyiracumi realized that being poor does not make malnutrition inevitable.

“Keza was one of the critical cases of malnutrition we had at the health center,” says Aimable Nkurunziza, the nutritionist who performed Keza’s follow-ups. “We are very happy to see how quickly this program has helped improve her health.”

Aimable and Nyiracumi are not the only ones happy about the Gikuriro program. Nyirahabimana Vestine is a mother learning at a village nutrition school in a different community. 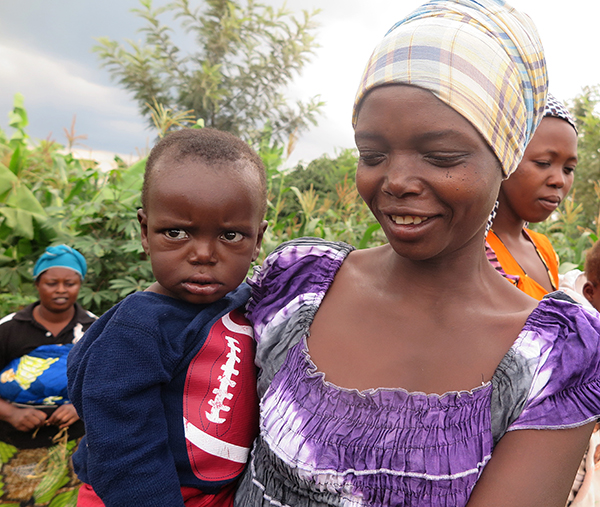 By attending a village nutrition school, Nyirahabimana has helped her son, Emmanuel, move from yellow to green on the malnutrition scale—a big improvement for his health. Photo by Emma-Claudine Ntirenganya/CRS

“When I was told that my son, Emmanuel, was suffering from malnutrition, I felt offended,” Nyirahabimana says. “I thought that I used to cook so well. I couldn’t believe I had a child suffering from malnutrition. I used to fry most of our food, including vegetables, and prepare each food separately. Because my son was thin and became sick very often, I believed he had been poisoned.”

But after Nyirahabimana learned more about the program, she started attending to see if her baby could get healthy. A few months later, she was surprised by the results.

“My son does not become sick anymore. He weighed 20 pounds 4 months ago, at the beginning of the program. Now he weighs 33. I now know that frying food doesn’t make it healthy.”

Parents who participate in the Gikuriro are happy and proud to be able to prepare healthy food using their own means. They are confident that their family members are no longer at risk of malnutrition because of what they’ve learned about creating balanced diets.

In the district of Nyarugenge, where Keza lives, the program is being implemented by the Women Investment Fund, a local nonprofit that promotes and improves the social and economic welfare of rural women and children.

The 5-year Gikuriro program is funded by the U.S. Agency for International Development. It began in 2015, and integrates nutrition, water, sanitation and hygiene activities to improve nutrition for women and children younger than age 5. CRS implements the program along with The Netherlands Development Organization.

August recess is a key moment to meet with your members of Congress while they are out of session... END_OF_DOCUMENT_TOKEN_TO_BE_REPLACED

Use this calendar for key dates to reflect and take action with your community to address climate... END_OF_DOCUMENT_TOKEN_TO_BE_REPLACED