When Therese Umuhire looks at her new goat, she envisions, well, something else.

"I dream of when I will get a cow from that goat," she says, nodding at her goat as it grazes on a hillside in Nyamirambo village in southern Rwanda. 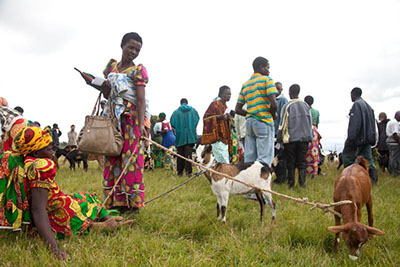 Therese Umuhire of Rwanda looks at the goat she just purchased with a CRS voucher and sees much more—a cow. Photo by Laura Elizabeth Pohl for CRS.

The goat, which Therese bought at a livestock fair, will eventually have baby goats, which she hopes to sell. Therese plans to use the cash to buy a cow. This is a big deal in Rwanda, where cows traditionally signify a person's wealth and well-being. Therese will then be able to sell the cow's milk, which will allow her a bit of financial breathing room. And she can use the manure in her agricultural work.

It won't be easy. Animals get sick. Vets cost money. Unexpected expenses crop up. But for now, the main thing the goat will provide is much-needed organic manure for her kitchen garden and coffee plot, which will help her yield better and more crops. But Therese feels ready for the challenge.

"I will be careful with that goat," she says.

Therese estimates it will take her 2 years to achieve the dream that began germinating 6 months ago when she joined a coffee farmers' group. With funding from Keurig Green Mountain, CRS is working with Caritas Gikongoro and Coffee Project to help growers provide for their families even if the coffee business is not thriving.

The goal is to help raise the living standards for 3,600 households by May 2015, when the program ends. Farmers receive agriculture, nutrition and health education, participate in savings and lending groups, and receive vouchers to buy an animal at a livestock fair.

"The purpose is, after we are gone, they will still support themselves," says Sylvestre Niyibizi, a Caritas nutrition officer.

One animal makes a big difference 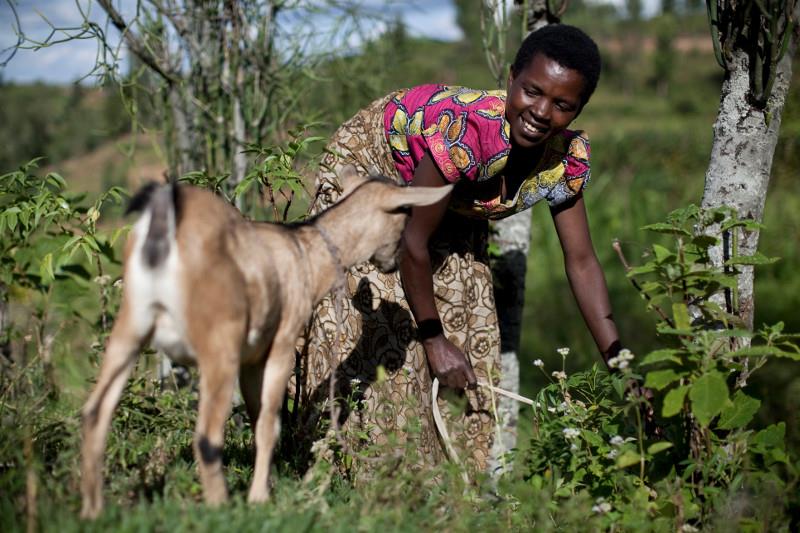 Therese Umuhire and dozens of other farmers in Rwanda were able to purchase animals—which provide fertilizer and income—at a CRS-sponsored livestock fair. Photo by Laura Elizabeth Pohl for CRS.

The day Therese received her goat dawned gray and cold. Men in puffy coats and women in colorful fabrics walked for up to an hour on red dirt roads to get to the grassy field where the livestock fair was held.

By 10:30 a.m., the sun came out and most of the 83 registered farmers arrived. Goats squealed, rabbits nestled in baskets, chickens hopped around and pigs rolled in the grass. A veterinarian checked each animal. But there were only 78 animals—not enough for everyone—and three of the 59 goats were sick so they couldn't be sold.

"There aren't enough animals," says Jackson Kayinamura, a Caritas agronomist helping to run the fair. "I expected a total of 100 goats and pigs by now."

At 11 a.m., with no more animals arriving, the Caritas team had to send some farmers home empty handed. They were asked to attend another fair later in the week. The remaining farmers and animal sellers lined up in front of an area roped off to form a makeshift market.

After the animal seller staked out their positions, the farmers entered the market and the bargaining began.

With roughly $26.50 in vouchers, Therese beelined for a woman being pulled in all directions by a half dozen goats. The woman was her neighbor, and Therese had long admired the goats' healthy appearance and color. As animals and people jostled for space around her, Therese bargained one goat's price down by more than 25%—from roughly $36 to the $26.50 she could afford.

After walking an hour home with her goat, Therese says she felt happy that she finally owned an animal.

"I never thought I would own a goat before because we are so poor," she says. "That goat will be the start of having more money."

August recess is a key moment to meet with your members of Congress while they are out of session... END_OF_DOCUMENT_TOKEN_TO_BE_REPLACED

Use this calendar for key dates to reflect and take action with your community to address climate... END_OF_DOCUMENT_TOKEN_TO_BE_REPLACED