Forgiveness. It's perhaps one of the most challenging of the Christian values. It's difficult to fathom a woman turning to the man who killed her entire family and saying, "I have forgiven you."

Yet that is what is happening in Rwanda, with the support of Catholic Relief Services. 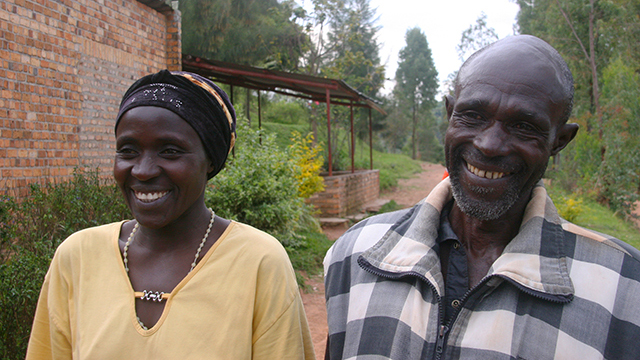 Hakim destroyed his neighbor Viviane's home during the Rwandan genocide. A CRS-supported program taught him how to ask for, and receive, forgiveness. Photo by Helen Blakesley/CRS
This year marks 2 decades since the genocide of 1994. Twenty years ago, Rwanda was a country in ruins. About 1 million people were killed in just 100 days. The fighting left about 300,000 children orphaned or separated from their families and half a million women widowed (many of whom were HIV positive through rape). Three million people fled the country as refugees. Over a summer, approximately half of the Rwandan population disappeared.

Rwanda's social and political structures were destroyed, its economy and infrastructure disintegrated. The reasons behind this crisis of catastrophic proportions are complex. Propaganda and intra-racial hatred stirred up over decades is one "explanation," if there can ever be an explanation for such atrocities.

But as I stood on a hillside in Rugango Parish in southern Rwanda last fall, looking out to the banana fronds and the terracotta rooftops as night fell, it was hard to imagine this orderly country was once a host to chaos.

'During the genocide I killed people.'

It's fall 2013, and I am traveling with a group of Catholic journalists. Our focus is on the events of 1994 and the CRS programming that is still helping a population struggling with painful memories.

The day we walk into the Rugango Parish community hall, high up in the hills, is a day I'll never forget.

Painted on the wall in Kinyarwanda, the local language, are the words "Jesus is the Way, the Truth and the Life."

A group of women and men wait for us on wooden benches, as thunder starts to crack over distant skies, presaging more rain.

Once we're settled into place, and introductions end, a man and a woman stand up, side by side. He is wearing a black-and-white-checked jacket. His name is Hakim. She wears a primrose yellow T-shirt and a black headscarf. Her name is Viviane.

"During the genocide, I killed people." Hakim makes the admission in a measured voice. "This is my neighbor Viviane: I destroyed her house." He takes a breath. "I spent 10 years in prison. While I was there, Caritas came into the prison, and taught us about reconciliation and unity. They taught us to ask for forgiveness and how to receive it."

This is part of CRS' work in Rwanda. Through its partners Caritas and the Peace and Justice Commission of the Catholic Church of Rwanda, CRS is reaching out to communities to help reconciliation efforts and improve social cohesion. Our work helps community members resolve conflicts in nonviolent ways, encourages healing and promotes peace. Communities are led in debates and reflections on the challenges facing them, and learn strategies that help them achieve reconciliation in their lives.

For Hakim, this approach has been life changing.

'We forgive because we know God is so forgiving'

"The training showed me that my sin is bad," Hakim says. "This touched me in my heart. I couldn't express how bad I felt before. But after asking for forgiveness and being forgiven—it was a relief, a rest. My heart had been heavy. Now that is lifted."

While Hakim was in prison, Viviane found it in her heart to help his wife; she even brought food to the prison. As she stands before us, she explains that for her, a Christian faith is at the heart of her forgiveness.

"We forgive because we know God is so forgiving," Viviane tells us. "We expect better in heaven. These beliefs are based on the Bible. Our faith helps us, of course."

"When I forgave the people who destroyed my home, they were ordered to pay me amends—but I saw that they were too poor to pay," she continues. "My relatives were shocked that I let it go, but now they see how good it is that we have asked for and given forgiveness in our community."

'They want to learn from us'

Hakim and Viviane's story is just one of many in this country, a country desperately trying to reconcile the trauma of its past. The parish of Rugango, like others, has realized that the only way to do this is to look toward the future.

The children of the community are at the heart of that future. With the support of CRS, the parish runs a youth group to teach the next generation. They look at the history of Rwanda, at the lessons to be learned. Role-play is used to show how the country slid into genocide. Bible readings are chosen as part of the training.

We're told that there are some kids, inspired by the discussions and debates at the youth group, who are helping to change the minds of their parents, who are still living in bitterness.

"Today we focus on the future," Hakim says. "We're united, we're together. In our community, we live in solidarity. If someone is in need, we help them."

And then we hear something that really gives me hope. The wave of peace nourished in this community seems to be spreading. "When others see how we live in peace, they start to want change too," says Viviane. "They want to learn from us."

A prayer asking God to help us recognize family in each of His children, to know them as brothers... END_OF_DOCUMENT_TOKEN_TO_BE_REPLACED