Maria Ramirez* has experienced the heartbreak of migration, the terror of gangs and the betrayal of spousal abuse while growing up in a poor community in Guatemala.

But it’s the torture of self-doubt—people telling her that she was useless and would never amount to anything—that was always the hardest to take.

It was also the most satisfying to overcome.

“I was always depressed and I would have anxiety attacks,” says Maria.

That was before she joined YouthBuild, a CRS program that provides concrete opportunities for employment, education and leadership to unemployed and out-of-school young people ages 16 to 25. 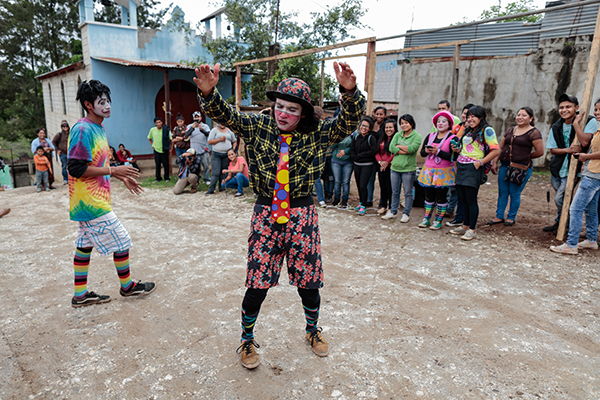 CRS YouthBuild participants in Guatemala watch the group ENCONTRATE act out a message of tolerance. Photo by Oscar Leiva/Silverlight for CRS

It was no easy feat to complete the 640 hours of training required for the 6-month program. Maria had to find daycare for her little girls. She was almost always short of money. And there was her husband, who was against her spending so much time away from home.

But the experience changed her life for the better.

Funded by the U.S. Department of State, YouthBuild is designed to help young people build their vocational and life skills through training and hands-on community projects.

In Central America, young people like Maria are three times more likely than older adults to be unemployed. Increasing violence and lack of economic opportunities—particularly in Honduras, El Salvador and Guatemala—are pushing them to make the perilous journey to the United States. At the same time, youth, who comprise more than half the population, are often stigmatized and blamed for the region’s problems.

Since 2009, YouthBuild has reached more than 7,000 young people in Latin America. And 70% have found jobs, started a business or returned to school.

The results demonstrate how they can transform their lives and communities, if given a chance. Their personal transformation can be the most remarkable change.

“Most young people in Guatemala work in the informal economy and don’t receive even the minimum wage. Nearly half of sexual offenses happen to youth who are between 13 and 24 years old,” says Lheslye Perez, youth livelihoods manager for Guatemala. “This data shows the risk young people face of becoming victims to crime, violence and discrimination. In the midst of this conflict environment, YouthBuild provides opportunities to youth, so they can develop their capacities and achieve their goals.”

Maria had to grow up fast and alone.

Her mother migrated to North Dakota when Maria was just 8 years old, leaving her to fend for herself and look after her 5-year-old sister.

“My sister was so traumatized by my mother leaving that she wouldn’t eat or talk for weeks,” she says. “I would have to talk for her. I was her mother from then on.”

The girls went to live with their maternal grandmother, who sold vegetables door to door. Their father came and went. 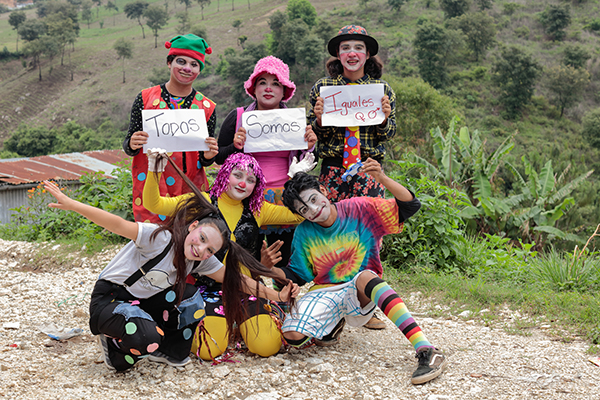 “We are all equal,” says the message from performers in ENCONTRARTE, a group that participates in CRS’ YouthBuild program in Guatemala. Photo by Oscar Leiva/Silverlight for CRS

Going to school was treacherous. Maria had to walk through an empty lot dividing territories controlled by rival gangs that sometimes served as their battleground. Twice she was caught in gunfire and had to hide in a nearby house.

She was spared the harassment and forced recruitment of girls and young women into gang activities that are pushing record numbers of young women to migrate to the United States. But her best friend—who was like a brother—was shot and killed by gang members.

And life with her grandmother and aunts was never easy.

“They treated me like a servant,” she says. “When they said jump, I had to jump. I was there to take care of the house and of them.”

She found refuge in singing, scraping enough money together to pay for voice classes on Saturday mornings. She dreamed of becoming a music teacher. She liked to study. What she really wanted was a family of her own, someone to love, she says.

By age 17, she was pregnant. She dropped out of school. And it wasn’t long before trouble started in her marriage.

From suicidal to hopeful

“He [her husband] would play video games all day and go out at night,” Maria says. “And when I would complain about it, he would hit me.”

Her home situation got worse after she joined the YouthBuild program. Angry about the time Maria was spending away, her husband became increasingly belligerent, and her own family joined in the abuse.

“They would just tell me that I would never be good at anything, so why bother going through the program,” she says.

The relationships with her husband and family would become the subject of many discussions between Maria and YouthBuild mentors. The program teaches young people to navigate difficult relationships, while also fostering a sense of belonging and positive identity. Cognitive behavioral therapy and the nurturing environment prepare participants to make decisions and assume positive roles in the worlds of work and family.

Ultimately, Maria made the decision to leave her husband.

During the 6 months she spent in the program, her thoughts went from suicidal to hopeful. After she graduated, she found a scholarship to study English. If she advances, she will have a better chance for a well-paying job at a call center in Guatemala City. It would allow her to become the professional she never thought possible.

“I would never have thought I would keep studying. I thought I would be home with the kids forever,” she says. “Now, I can just imagine dressing up every day and going to an office, and earning good money to support my family.”

CRS is a member of the YouthBuild International network.

We seek daily renewal from the source of all life, and so we pray ... END_OF_DOCUMENT_TOKEN_TO_BE_REPLACED

Our walk with God is reflected in our walk with others, and so we pray ... END_OF_DOCUMENT_TOKEN_TO_BE_REPLACED